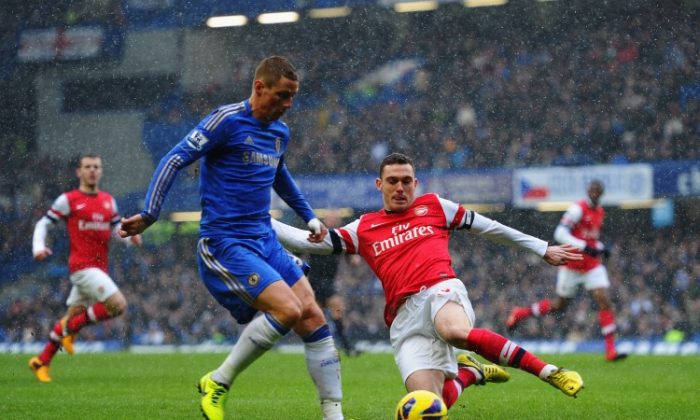 Chelsea Finally Wins One for Benitez at the Bridge

Chelsea finally managed to break the Rafa Benitez home hoodoo with a 2–1 win over Arsenal in the snow at Stamford Bridge on Sunday.

It was a game of two halves with Chelsea dominating the first period and taking a deserved two-goal lead through Juan Mata and Frank Lampard. Arsenal came back in the second half and Theo Walcott gave the visitors some hope with a well-taken goal, but that all-important equalizer proved elusive and the team in blue took all three points.

In 75 league meetings at Stamford Bridge, Chelsea and Arsenal have won 25 apiece with 25 drawn. Chelsea has had the better of recent fixtures winning five of the last eight home and away.

However, the Gunners have taken more points at Stamford Bridge than any other side since the Premier League came into existence and they did enjoy a notable 5–3 success in the equivalent meeting last season. But a certain Robin van Persie was responsible for scoring three of the five and it goes without saying that he is no longer around.

All the pre-game talk was of Chelsea’s dire form at Stamford Bridge and what, if anything, beleaguered manager Benitez can do to turn things around. The Spanish manager told Fox Sports that Chelsea needs to “just concentrate on our football and if we have one or two good games, it will be totally different.”

The absence of skipper John Terry has undoubtedly been a factor. Terry has played just half an hour of first-team football since the Champions League defeat at Shakhtar Donetsk on Oct. 23.

He was named on the bench with Branislav Ivanovic moving inside to partner Gary Cahill in the center of defense and Cesar Azpilicueta coming in at right back.

Fernando Torres was chosen to start in preference to new signing Demba Ba. Interestingly, David Luiz did not even make the squad for this one.

Absentees also included Oriol Romeu, who will be unavailable for some time with a knee problem, while John Obi Mikel and Victor Moses are on international duty with Nigeria for the African Cup of Nations.

Arsenal’s Laurent Koscielny was back from a one-match suspension but only made the bench, with Per Mertesacker continuing alongside Thomas Vermaelen at the center of the back line.

Mikel Arteta and Tomas Rosicky are both back on the casualty list with calf problems. Gervinho is at the African Cup of Nations with the Ivory Coast.

A big blow for Arsene Wenger was the absence of Alex Oxlade-Chamberlain and Lukas Podolski due to illness. This meant that Olivier Giroud would lead the line with the newly contracted Walcott playing wide on the right—not his preferred position.

Another Good Start for Chelsea

With five minutes on the clock, Giroud was put through by Walcott, but the French striker shot wide and wasted the opportunity. That proved to be about as good as it got for the Gunners during the first 45 minutes.

Chelsea went down the other end just a minute later and created a similar chance for Mata. The difference was that the little Spaniard seized his chance with relish and put his team into the lead.

Arsenal felt somewhat aggrieved, as during the build-up Ramires appeared to get a piece of Francis Coquelin and nothing of the ball, but referee Martin Atkinson gave nothing.

The home side went two up when Ramires was brought down by Arsenal keeper Wojciech Szczesny on the edge of the six-yard box. There was no malice involved and all but the hard core Chelsea supporters were relieved that the card shown was only yellow and the teams would remain at 11-a-side.

Frank Lampard converted the penalty with his usual aplomb and the No. 8’s name was chanted all around the ground. Lampard has been one of the greatest players in Chelsea’s long history and has been a key factor in the winning of every trophy that has gone to Stamford Bridge in the modern era.

Chelsea proceeded to dominate the rest of the half while failing to make any further additions to their goal tally. Several Arsenal players looked as if they would prefer to be warm and snug indoors rather than out in the snow.

Arsenal’s shocking first half performance would doubtless have resulted in Arsene Wenger reading the riot act, and his charges certainly began the second half with a great deal more purpose. At the 58-minute mark they finally made the breakthrough.

Fernando Torres lost possession, the ball was picked up by Santi Cazorla who threaded a beautiful ball through to Walcott whose sharpness was too much for the Chelsea defenders. The England man slotted the ball confidently past Petr Cech to the keeper’s left.

It was a wonderfully well-taken goal and begged the question as to why Walcott was out on the right when he appeared so much more dangerous than Giroud through the middle.

The Arsenal players gave a much better account of themselves in the second period but just could not find an equalizer. In particular, they put the home side under tremendous pressure throughout the five minutes of stoppage time but a header from Giroud over the top was the closest they came to squaring the ledger.

Chelsea’s win takes them to 45 points and consolidates their position in third place, although they remain 11 points adrift of leaders Manchester United and six behind Manchester City.

Whether the Bridge faithful will ever warm to the former Liverpool manager is, however, highly debatable, and it would be a huge surprise if Benitez is still occupying the Chelsea dugout this time next year.

Arsenal could ill afford this setback and continues to be in a dogfight for the fourth Champions League qualifying slot with several other aspirants.

The Gunners occupy sixth place with 34 points although Liverpool and West Brom also have 34 points. Everton sit fifth with 37 points and Tottenham Hotspur are fourth with 41 points after their 1–1 draw at home to Manchester United.