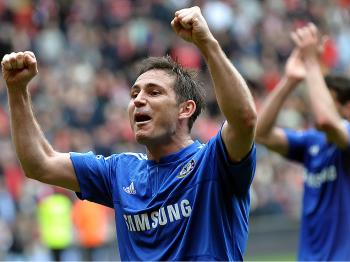 SUPER FRANK: Frank Lampard celebrates after getting the second goal, knowing Chelsea has one hand on the title. (Paul Ellis/AFP/Getty Images)
Soccer

By Patrick Hayden
Print
Chelsea traveled to Anfield and were gifted a goal and then cruised to a 2–0 victory over Liverpool.

Chelsea manager Carlo Ancelotti knew going into the game that a win would mean that winning their last home game of the season against Wigan would guarantee the Premier League title irrespective of how Manchester United faired in their last two league matches.

After a cautious start, Liverpool captain Steven Gerrard gifted Didier Drogba the opening goal with a woeful backpass which was intercepted and easily dispatched at The Kop end of Anfield.

Frank Lampard made it two after the break after connecting with Nicolas Anelka’s cross.

Pepe Reina prevented the score line from being more lopsided with a superb low stop from a Florent Malouda shot just after the hour mark.

Conspiracy had been rife prior to the game in that if Liverpool had beaten Chelsea, it would open the door for Manchester United to surpass Liverpool’s tally of 18 league titles.

Liverpool did not lie down and surrender. But they did lack some pace, which would have been due to their mid-week extra time encounter with Atletico Madrid.

“I felt that it was not easy for the players to be fresh. So we tried to play a strong team and you could see that some players were tired,” Liverpool manager Rafael Benitez told the BBC.

With the loss, Liverpool loses any shot of fourth place in the Premier League.

Nani scored the only goal in a match which Manchester United dominated at Sunderland.

United knew they had to win as Chelsea played and won their match earlier in the day.

Nani scored the only goal of the game by shooting with the outside of his boot to tuck the ball in the bottom left corner of the Sunderland net, just before the half hour mark.

Rooney who was back to full fitness was the main source of trouble for Sunderland and for Dimitar Berbatov it was a tough day at the office as he squandered two glorious chances—an open net after a Rooney centering pass and the other a header from inside the six-yard box.

But it wasn’t all United, as Edwin van der Sar tipped Steed Malbranque’s power drive just over the bar.

There was real quality in United’s goal with build up play from Giggs, Berbatov, Rooney, and Darren Fletcher who made the pass to Portuguese winger Nani.

On Saturday, Tottenham beat Bolton 1–0 and Man City beat Aston Villa 3–1, which leads to a Tottenham versus Man City showdown on Wednesday for the lucrative fourth place and the Champions League next season.