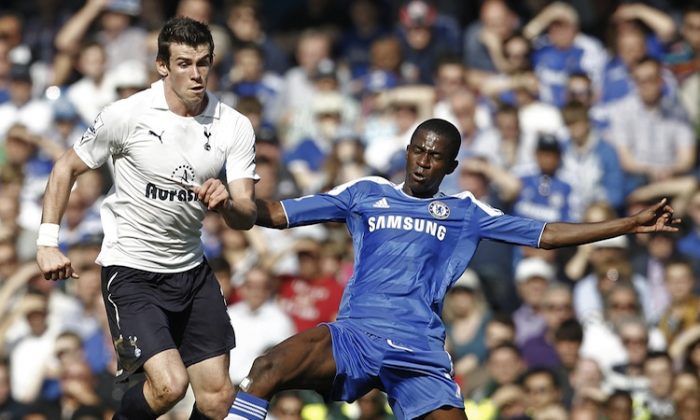 Chelsea and Tottenham in Stalemate at Stamford Bridge

The most disappointing London derby of the season ended in a 0–0 draw as neither Chelsea nor Tottenham Hotspur could find a goal at Stamford Bridge in Saturday’s early Premier League match.

Both sides did manage to rattle the frame of the goal, and Chelsea had a couple of penalty shouts turned down by referee Martin Atkinson, but with neither side able to find a winner, Arsenal are the beneficiaries in the contest for UEFA Champions League places.

Chelsea went into this one as favorites, having amassed more points and scored more goals against Tottenham than against any other team since the inception of the Premier League. Indeed, it is all of 22 years since Spurs came away from the Bridge with all the points, courtesy of a winning goal from legendary England striker Gary Lineker.

John Terry was back after a two-game absence to lead out the Blues, relegating David Luiz to the bench. Branislav Ivanovic was still struggling with a thigh problem, so Jose Bosingwa took his place at right back. Didier Drogba was chosen to lead the Chelsea line ahead of Fernando Torres.

Ledley King’s knees will not allow him to play two games in a week, so Tottenham was led out by Scott Parker. Following his injury time point saving strike against Stoke, Rafael Van der Vaart was given the nod, with Louis Saha starting on the bench and Aaron Lennon unavailable. William Gallas returned for his first start since the beginning of the year to strengthen the Spurs defense.

Stroll in the Sun

Stamford Bridge looked a picture on an unseasonably balmy March day with a cloudless sky the color of Chelsea’s strip. It was perhaps due to the spring sunshine that the languid pace of the first half hour was more what we would expect in a summer pre-season friendly than a crucial league game with Champions League places at stake.

There were literally only two incidents of note in the entire first 45 minutes. At the 27-minute mark Frank Lampard and Gallas tangled in the box, but no penalty was given. Six minutes later Emmanuel Adebayor broke away down the right, left Ramires and Bosingwa for dead, but then over-hit his cross, which sailed over Kyle Walker’s head.

Both teams looked neat and tidy in possession, which is hardly surprising since there was little pressure on the ball from either side. Indeed, neither goalkeeper was troubled until first half stoppage time when Petr Cech, playing his 250th game for Chelsea, was finally called into action to block a point-blank shot from Van der Vaart. Adebayor headed the rebound over the top and the whistle blew for the end of the half.

The teams did exhibit a little more urgency in the second period. On 57 minutes, a decent move from the visitors ended with Walker shooting fractionally wide of Cech’s left-hand upright. Chelsea emulated Tottenham’s newly found energy and went on the attack themselves, only to have another penalty appeal turned down when Bosingwa was pulled back by Benoit Assou-Ekotto five minutes later.

Eleven minutes after that, Juan Mata hit the post with a curling left-footed free kick from outside the area with substitute David Luiz just unable to reach the rebound. Spurs keeper Brad Friedel had barely moved.

Back up the other end, Adebayor looked certain to score having rounded Petr Cech, but was denied by a wonderful piece of defending from Gary Cahill. The subsequent corner produced a powerful header from Gareth Bale that slammed against the crossbar. The ball rebounded to Bale himself who headed back into the six-yard box where Adebayor was lurking; but it was not the big striker’s day and he again headed over the top from close range.

Spurs finished the stronger and could have snatched a win in injury time. Three minutes into injury time they were awarded two free kicks in succession a few yards outside the box. The Chelsea defenders cleared the first, but Petr Cech only just managed to scramble the second around the post to preserve a point for the home side.

So Chelsea have faltered slightly with a loss and a draw following caretaker manager Roberto De Matteo’s dream start of four straight victories. Considering the club’s impressive record against Tottenham, they would have expected to win this one.

By the same token, given the history of the last two decades or more, Spurs will have been happy to come away with a point.

“It’s a step in the right direction after the results that we’ve been having,” Tottenham defender Kyle Walker said in an interview with Sky Sports. “I thought we were organized, and as a defensive back five with Scott Parker in there, I’m pleased with the point.

“It was a bit of a nervy start for both teams…We wanted three points,” Cahill said in an interview with ESPN.