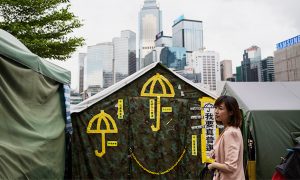 Hong Kong Is About to Vote on Beijing's Election Proposal. Here's Why It Matters
0
Share Now
TelegramFacebookTweetEmailTellMeWeReddit
Copy Link 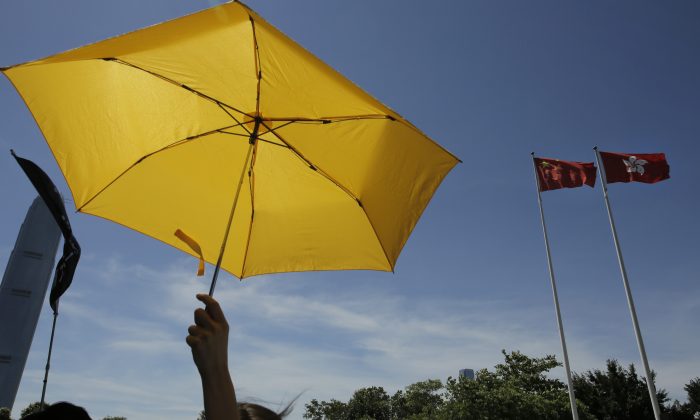 A pro-democracy protester raises a yellow umbrella in front of a Chinese national flag and a Hong Kong flag after lawmakers voted against the election reform proposals in Hong Kong, June 18, 2015. (AP Photo/Vincent Yu)
China

Little fanfare or drama was expected on June 18 when Hong Kong politicians cast their vote on a political reform plan for Hong Kong’s democratic future—right up till the very last minutes before the poll started.

For months, pro-democracy lawmakers were adamant on blocking an election proposal handed down by Beijing in August last year that would change the way Hongkongers choose their top official. It was sham democracy, cried the lawmakers, because the two or three chief executive candidates would be handpicked by a small, nonrepresentative committee stacked with pro-Beijing interests.

Many Hongkongers too weren’t pleased with Beijing’s edict. From end-September to mid-December, students led tens of thousands to a camp-in on the city’s major thoroughfares in a so-called Occupy protests.

After the authorities cleared the “tent cities” and the students shuffled back to school (not before making vows to return), talk shifted back to Hong Kong’s politicians.

Leung Chun-ying, the hugely unpopular Hong Kong leader, his deputies, and Chinese officials talked about winning over legislators to back the bill—a two-thirds majority was required but the pro-democracy lawmakers held 27 of 70 seats.

Beijing made it clear to fourteen opposition members in a closed-door meeting that it wouldn’t compromise. Days before the vote, controversy: outspoken pro-democracy legislator “Long Hair” Leung Kwok-hung told Hong Kong media that he turned down a HK$100 million bribe to back the election plan from an unnamed party.

But a communication breakdown five minutes before the political proposal went for a vote resulted in a bewildering series of events.

Hoping to delay the voting through lack of a quorum, 34 pro-establishment lawmaker filed out of the legislature hall after instructions were passed down by business sector lawmaker Jeffrey Lam via Whatsapp. Their excuse: they wanted to wait for their colleague Lau Wong Fat, who was supposedly ill, to journey to the council chamber so they could all cast their votes together.

However, eight pro-establishment legislators somehow missed the message, and the voting proceeded. After a flurry of button-pushing, what should have been a “barely there” veto turned into a resounding “nay” for Beijing’s plan.

“This veto has helped Hong Kong people send a clear message to Beijing – that we want a genuine choice, a real election,” said pro-democracy lawmaker Alan Leong to reporters after their bizarre 28-8 victory.

The following day, two pro-establishment lawmakers, Jeffrey Lam and Regina Ip, were reduced to tears—Lam at a press conference where he apologized to supporters for the fiasco, and Ip on a local radio show.

“I feel terrible, I couldn’t sleep last night,” said Ip, according to the Wall Street Journal. “After all the hard work I’ve put in the past 20 months I really wanted to cast my vote.”

After slamming the pro-democracy faction on Thursday, the chief executive switched to a conciliatory mood. At a press conference on Friday, Leung Chun-ying expressed a desire to forget bygones and mend bridges with members of the legislature.

“It’s time for all of us to move on,” Leung told reporters. “We should try to forge consensus on various economic and livelihood issues.”

Beijing wasn’t in a forgiving mood.

“Certain people, whose aim was to hobble the development of democracy in Hong Kong, voted against the bill in the legislature,” Foreign Ministry spokesman Hong Lei told reporters. “They will bear the responsibility of history for this.”

“The actions of the opposition camp show they are the upsetters and destroyers of Hong Kong’s democratic development process,” said regime mouthpiece People’s Daily.

Hugo Swire, the minister of state at the United Kingdom’s Foreign Office said: “The UK is disappointed by the outcome of this [Hong Kong] electoral reform process. We continue to believe that a transition to universal suffrage is the best way to guarantee Hong Kong’s stability and prosperity, and is in everyone’s interest.

“We hope that a constructive dialogue on future reforms can be established, reflecting the aspirations of the people of Hong Kong and in accordance with the Basic Law,” Swire added.

Having stolen a march, the pro-democracy camp is looking to convince Beijing that the Hong Kong people want “true democracy”—be it in an immediate grand gesture or long-term campaign.

In January, pro-democracy lawmaker Albert Ho promised to trigger a by-election in his seat, a “super constituency” consisting of 3.2 million voters (Hong Kong has a population of 7.2 million) after voting down the Beijing plan. Ho’s plans are currently on hold because he hasn’t secured the backing of his political party or the student group Scholarism, which initially planned to back him.

Joshua Wong, the 18-year-old leader of Scholarism and the public face of last year’s Occupy protests, wrote in a newspaper editorial before the election plan vote that Hongkongers should think of preserving the city’s rights and freedoms after 2047 when the “one country, two systems” arrangement runs out.

After the unexpected way in which the “no” vote was passed, Wong said to media in Hong Kong, it shouldn’t be “seen as victory” but instead a “reminder” that Hongkongers “need to continue to fight for democracy.”