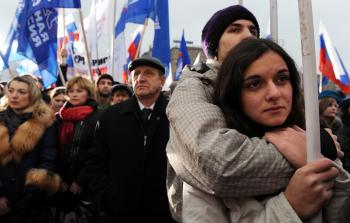 Russians attend an anti-terrorism rally organized by the dominant United Russia political party in memory of those who died in the recent Nevsky Express passenger train tragedy, in Moscow on Dec. 2. (Alexander Nemenov/AFP/Getty Images)
Europe

Peter Sedik
View profile
Follow
biggersmaller
Print
A Chechen Islamist group claimed responsibility for the bombings in Russia on last Friday, which took the lives of 26 people on the Nevsky Express.

The terrorist group revealed their actions in a public statement on Wednesday, which was posted on the Kavkazcenter.com Web site. They said a “special operation group” under the command of the “Emir of Caucasus Emirate” Dokka Umarov, carried out the operation, which was allegedly prepared early this year.

“We warn the leadership of Rusnya that unless they stop the killing of innocent Muslims,” reads the statement, “we reserve the right to conduct appropriate military operations against the civilian population of Rusnya.”

Dokka Umarov is Russia's most wanted rebel, but the authenticity of the statement could not be verified.

The bomb that detonated under the high-speed train traveling to St. Petersburg derailed the last three cars near the town of Bologoye, 248 miles northwest of Moscow.

The Nevsky Express is a popular line for tourists and businessmen. In August 2007 a similar incident occurred on the same route, when a bomb injured 30 people.

During the rescue operations the following day, another bomb detonated in the area. According to Russian newswire RIA Novosti, the forensic examination showed that a cell phone was used to remotely activate the second device.

The police believe the second explosion was aimed at the investigators working on the scene. The bomb injured the chief of Russia's Investigative Committee Alexander Bastrykin.

According to Leonid Belyayev from emergency services, the bomb could have hit two trains, but “the Nevsky Express was one minute late, or three kilometers off, given its speed,” said the official on Wednesday.

Investigators claim they have identified a house where the suspects were staying and released a sketch of a man they think is responsible for the bombing.

Dokka Umarov, the separatist’s leader, is in charge of small groups of guerrilla fighters who battle against Russian Special Forces in the Chechen mountains.

As a leader of the Islamist insurgency in the North Caucasus, his group has claimed responsibility for several bomb attacks in Russia.

In 2004, Chechen separatists also claimed responsibility for the Beslan school hostage crisis, where at least 385 people died, most of them children. The attack was launched under the lead of Umarov predecessor Shamil Basayev who was killed in 2006.

The war against Chechen separatists has officially concluded yet numerous clashes between the rebels and Russian security forces are still following the two wars between Russia and Chechnya.

The Nevsky train bombing is the largest attack outside the North Caucasus since August 2004, when two passenger planes were downed.