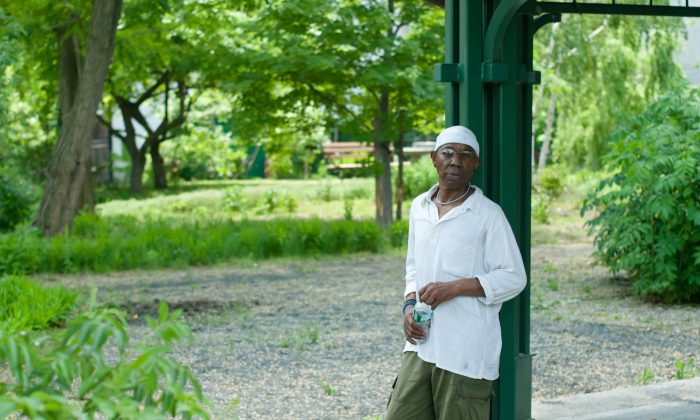 Troy Lancaster, a photographer and activist, stands in the Dred Scott Bird Sanctuary in the South Bronx. Lancaster helped get the park and the surrounding parks built, and does programs to mentor and teach local kids. (Joshua Philipp/The Epoch Times)
New York

Chasing the American Dream in the South Bronx

NEW YORK—The neighborhood was ugly and run-down, covered with the burned-out ruins of buildings left by torch-men hired by landlords in the 1970s. The people were left scarred, the community left tainted by bad perceptions.

Troy Lancaster moved into the South Bronx after the fires. He lived in subsidized housing next to a field people were using to dump everything from used mattresses to dead pets. Bodies had been found in the singed ruins of buildings in the littered fields across the street and next door.

Lancaster, a long-time activist and a photographer who documented the civil rights movement, decided to protest. Facing the greed that lit the arson fires in the Bronx, his protest would be selflessness. Facing the ugliness that was left behind, his protest was to create beauty.

In 1995, he set up a shack in the field next door, began cleaning up the garbage, then moved on to turn it into a garden. He didn’t expect things to last long. In similar community gardens, bulldozers rolled in when developers became interested, and even the people who chained themselves to the trees and fences couldn’t stop them.

“When they saw me with that shanty shack, and Dred Scott, it was real slavery to them,” he said. “They complained about ‘there’s this man out there on all that land, and he got a little shack, and it looks like he’s farming.’ And they didn’t like it.”

Yet, what Lancaster didn’t realize was the company that owned the land he squatted on had switched its zoning to parks land—a tactic often used to avoid taxes until a company is ready to develop—and Lancaster’s protest on the plot of land would help turn it into a place of beauty that would eventually help change the community.

If you take the D train up to 170 Street in the Bronx, you’ll be greeted by a sea of towering apartment buildings and streets devoid of trees. Graffiti decorates the walls, and locked gates guard the walkways leading up to apartments.

Then when you hit Grant Avenue, suddenly there are trees and wildflowers. Nesting birds can be heard singing from a large field. There is little or no trash on the ground. As you keep walking, you’ll start to hear kids laughing as they play on swings and playground equipment. And across the street from the playground, you’re likely to meet Lancaster working ground at the Dred Scott Bird Sanctuary.

The playground, the bird sanctuary, and the field where birds can nest—which stretches almost the full length of the block—were all built after Lancaster began his protest. The Dred Scott Bird Sanctuary reopened May 17 after being renovated for two years through a half-million dollar grant that Lancaster won for the community park.

Although Lancaster is 65-years-old, he could pass for 40. He has kind eyes and a genuine smile, and expect a friendly hello if you pass by.

“Being involved here is the happiest I’ve ever been,” he said, yet added, “at one point I didn’t like this place at all, this community.”

“I didn’t like the place, and I was quickly becoming part of what I didn’t like,” he said.

Lancaster moved to the South Bronx from East Harlem around 30 years ago, and it wasn’t long before he was dragged down by drugs and the bad elements of the community.

He said people find solace in each other, and when there’s nothing to do, bad things quickly find their way in. “Before they know it, their road gets very bleary and slippery, and then they realize there are no brakes on the vehicle they’re in, and they’re gone just like that,” Lancaster said.

Lancaster wasn’t the only one who was losing hope. One night he was watching television, and an old speech by Adam Clayton Powell, Jr., the congressman who represented Harlem between 1945 and 1971, was shown.

Powell had addressed the African American community in a time when many believed they couldn’t do anything to change their communities.

“As far as I know, here, you’re in trouble,” Powell said.

“Some of you say to me, ‘well, I’m not like you. I’m not a congressman. I haven’t got education. I haven’t got work,” he said. “But you’re a human being. And you know what you’ve got? You’ve got in your hand the power to use your vote and to use even those few cents you get from welfare to spend them only where you want to spend them.”

“What’s in your hand!?” Powell said, and he repeated that line throughout the speech, giving examples of great people through history who accomplished great things while wielding what seemed like nothing.

When Lancaster heard the speech, he looked down at his hands. “Even though you feel you have nothing, you do have something,” Lancaster said. “When he said ‘it’s what’s in your hands,’ my hands were empty, but I did have something because I put my hands to work, to clean up my neighborhood and clean up this space here.”

“I sometimes think that all that happened to me is so I know about it, and so I know what I’m up against here,” he said.

A Land of Dreams

Lancaster wakes up at 5 a.m. each morning, then goes to open the park and playground, picks up trash on the sidewalks, and often works the grounds before going to work.

His family also helps out, in addition to their own responsibilities. His wife is an elementary school teacher. He has five children—two of whom just graduated from college, and a third, who is autistic, is part of a volunteer program in midtown where he walks senior citizen’s dogs.

Aside from the mentoring programs Lancaster already does with kids through the local schools, he and his wife are looking to start a summer program for local kids.

For Lancaster, however, this is more than just volunteer work. For him, it’s a hope that he can genuinely change his community for the better.

“The funny thing about America … I got a friend who just recently wrote a book called ‘Chasing America,'” he said. “I realized that’s what I’m doing. I’m chasing America.”

Chasing America, he said, is an idea that if we see something wrong we can do something about it. It’s chasing the American dream that we can all create something, accomplish something, or become something. “I think that’s what America feeds on,” he said. “We’re chasing this dream of what it is.”

What he’s facing, however, is an area that has the poorest congressional district in the nation—where many people don’t believe they can do anything to change their neighborhoods.

The local community, he said, is mainly blacks, Puerto Ricans, and African immigrants. Many of them, he said, have been scarred by the events that took place in the South Bronx, or grew up amidst the negative perceptions that have locked many from the community in.

Lancaster wants to bring back a sense of hope, show the kids the value of work ethic, and teach others that they can change their communities if they make the effort.

“I’m saying that we can all make this better together, and we can do other things together,” he said.

He adds that for him, being an activist, he also likes to prove people wrong.
Facing the bad perceptions that now surround the South Bronx, he wants to “prove to people that this is not a dump, that this is a beautiful neighborhood just like every other neighborhood in this city, and to show people we have a lot to be proud of and nothing to be ashamed of.”