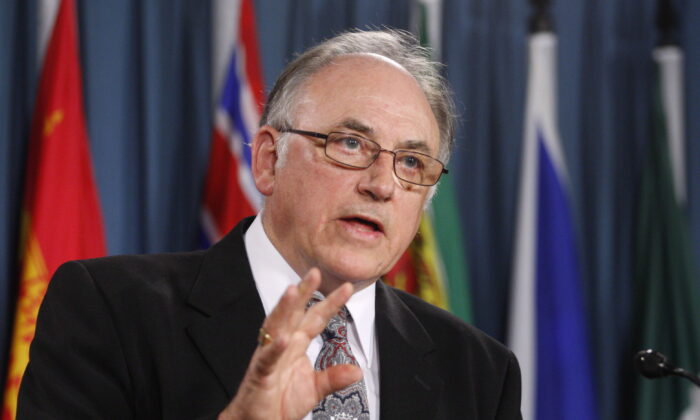 Brian Peckford holds a press conference to highlight previously unpublished documents dealing with the patriation of the Constitution on Sept.19, 2012 on Parliament Hill in Ottawa. (The Canadian Press/Adrian Wyld)
Canada

Brian Peckford, former premier of Newfoundland and the last surviving architect of the Canadian Charter of Rights and Freedoms, has filed a lawsuit against the federal government on Jan. 26.

Alongside five other applicants, Peckford’s team is challenging the Constitutional merits of the Trudeau administration’s mandates restricting travel for Canadians without a COVID-19 vaccination.

And with his experience and bond with the Charter he helped craft, Peckford says he is determined to preserve it—and the rights and freedoms for Canadians he said formed the fabric of its purpose.

“This is a culmination of my work to oppose, what I believe is the potential destruction of a very large part of our democracy,” he said in an interview with The Epoch Times. “If the Charter is not honoured at the end of the day, I think we will have witnessed the degradation of its power.

“This is a crucial, historic moment for everybody, to determine whether the Charter of Rights and Freedoms really mean something.”

Leis is the Vice President of Development and Engagement with the Frontier Centre for Public Policy. While he believes the federal government breached the Charter, he says judges may nevertheless side with personal translation instead of judicial interpretation.

“The bottom line is that the Charter of Rights and Freedoms is not like any other federal law, it is the Constitution,” Leis told The Epoch Times.

“Any judge with any knowledge of basic jurisprudence will have to address this claim, and it’s one that cannot be avoided. For some reason, some of our courts and judges are missing in action, they’re not doing their job. So this is good. I think this is a seminal moment as this lawsuit is tabled and it represents a legal showdown for our country.”

In recent months, Peckford has been touring primarily Vancouver Island, giving interviews and writing a personal blog warning Canadians of the potential fracturing of the Constitution.

Yet, when he was ready to announce the lawsuit publicly, he said he was reluctant to trust the majority of Canada’s media outlets with the news. So he called a high profile Canadian who immediately agreed to interview him and post it on his social media.

After speaking to Jordan Peterson, the interview was uploaded to YouTube on Jan. 26 and had more than 125,000 views in the first nine hours. Peckford then had the Justice Centre for Constitutional Freedoms, who filed the lawsuit on his behalf, make the official announcement through a press release shortly afterwards.

Keith Wilson Q.C. is the lead counsel for Peckford’s legal team. He told The Epoch Times the federal government stepped outside its lawful boundaries with the travel restrictions, and they will prove it using the Charter.

“Through this case, we will be defining the limits of government overreach into the lives of Canadians,” Wilson said.

“The real fight on this case is likely to occur under section one (of the Charter), where the government will have to acknowledge the breaches because they’re all real, they’re depressing, but they’ll have to seek to justify it.

“And it’s absolutely clear to me from the statements of the Prime Minister and other government officials that they’re restricting Canadians’ freedom of movement in an effort to coerce them into getting vaccinated. That’s not a proper exercise of a legal, lawmaking function in a parliamentary democracy that has a Charter of Rights and Freedoms. And when you’re faced with that, you take the government to court and that’s exactly what we’re doing.”

Brian Giesbrecht is a retired judge from the Provincial Court of Manitoba. In an interview with The Epoch Times, he echoed Wilson’s assessment that banning travellers based on vaccination status was government overreach. Therefore, he thinks Peckford and his team should focus on this mandate for legal action.

“All in all, I think that Brian Peckford’s case definitely has merit, and it will be very interesting to see what the Supreme Court decides,” Giesbrecht said in an interview. “If they don’t allow this one, I would be pessimistic about the meaning of civil rights in Canada because the ability to move from one province to another is just a basic right and it’s being restricted on what I think are very questionable grounds.”

“The federal government has not lifted a finger to prove that they needed to do this,” Peckford added.

“If we win, of course, we will see the reaffirmation of the Charter of Rights and Freedoms to be what it was supposed to be when it was written and passed in the House of Commons.”