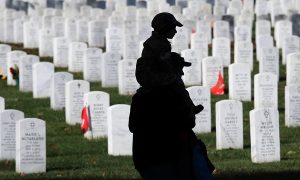 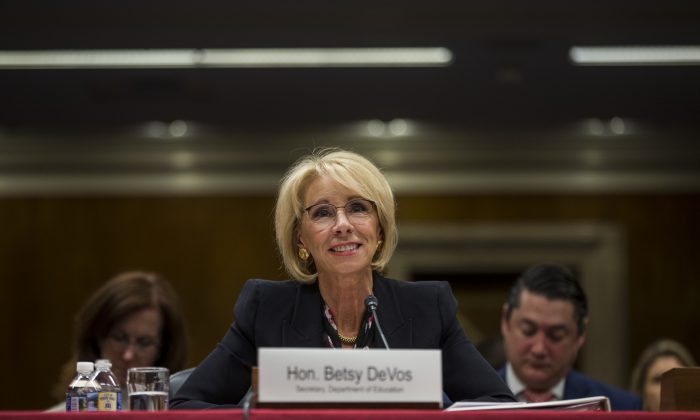 Secretary of Education Betsy DeVos testifies during a Senate Labor, Health and Human Services, Education and Related Agencies Subcommittee discussing proposed budget estimates and justification for FY2020 for the Education Department in Washington on March 28, 2019. (Zach Gibson/Getty Images)
US News

Charter schools have outperformed traditional public schools in both cost-effectiveness and return-on-investment (ROI) metrics according to a new report by the University of Arkansas’ Department of Education Reform.

A national team of researchers, as part of The School Choice Demonstration Project, began studying over the course of a few years which type of public school delivered the most ­academically cost-effective education.

The authors found that in all eight cities, public charter schools outperform traditional public schools in both math and reading cost-effectiveness. They also were ahead in standardized test scores despite receiving less funding per student.

A charter school is a public school that is independently run and “receives greater flexibility over operations in exchange for increased performance accountability,” according to the National Charter School Research Center. State laws and charter contracts provide schools with autonomy over curriculum, personnel, budget, and schedule. Charter schools, like regular public schools, are not allowed to charge tuition.

“While their sizes and demographics vary widely, each city has a substantial concentration of students enrolled in charter schools,” the authors wrote in an op-ed for the New York Post. “In every city, we found that charter schools were more productive—that is, they yielded more learning per education dollar spent than traditional district schools.”

The authors described how in New York City, students in charter schools scored roughly 12 points in reading on the 2015 National Assessment of Educational Progress (NAEP) for every $1,000 invested in those schools, whereas students enrolled in the city’s traditional public schools scored about 9.5 NAEP reading points with the same amount invested.

For math, the numbers were similar: “More than 13 NAEP points per $1,000 of funding for charters compared to almost 10.5 points for traditional schools,” the authors wrote.

In March, DeVos testified to the House Appropriations Subcommittee on Labor, Health and Human Services on President Donald Trump’s 2020 budget. She said the new budget would increase access to school choice and includes, among other benefits, increased funding for charter schools.

“Just had a great visit at LEAD Cameron, a public charter middle school with a proven turnaround success story in TN,” she wrote on Twitter on April 1. “LEAD Cameron has moved from one of the state’s lowest performing “Priority Schools” to currently ranking in the top 5% for academic growth.”