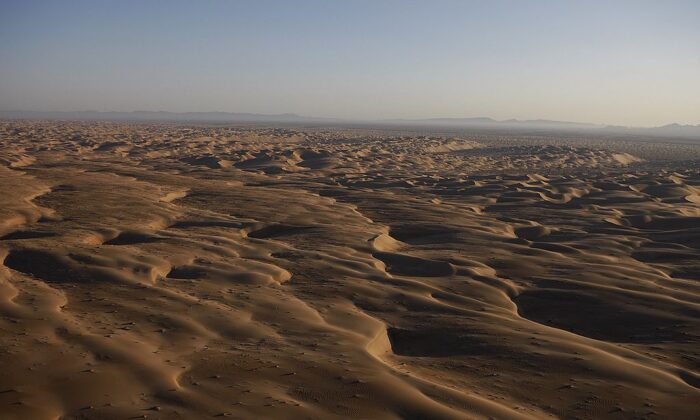 Aerial views of the desert area between the Colorado River and Imperial Valley and the Salton Sea, Imperial Valley, on Aug. 8, 2009. (Brent Stirton/Getty Images)
Southern California

A 29-year-old Chapman University cinematography student was killed in a dune buggy crash during a film shoot in Imperial Valley, California, on April 15.

Peng Wang, a third-year graduate student, was partially ejected from a 2022 Can-Am Maverick UTV in the Imperial Sand Dunes Recreation Area located in the southeast corner of California when the vehicle overturned while moving along the side of a sand dune.

“I’m absolutely heartbroken about this, like all of us at Chapman. This is an incredibly supportive and caring community, and we’ve all been devastated,” Stephen Galloway, dean of Dodge College of Film and Media Arts at Chapman University, told KTLA.

Wang volunteered as a cinematographer on the production with three other students from the University of Southern California (USC) School of Cinematic Arts.

All three USC students involved in the crash survived, with no significant injuries reported.

“Our hearts go out to Peng’s family, his girlfriend, and the USC students whose film he was working on as a volunteer when the tragedy happened,” Galloway said.

Everyone but Wang wore safety harnesses when the vehicle crashed, according to California Highway Patrol (CHP) officials.

Elizabeth Daley, dean of the USC School of Cinematic Arts, said—in an April 18 statement cited by media reports—that the school does not tolerate violations of safety protocols and that university officials are investigating the fatal accident.

“I am deeply saddened to share that over the weekend, a student from Chapman University who was serving as a cinematographer on a production with [USC film school] students was killed in a vehicle accident,” Daley said. “Our deepest sympathy is with the family members of the deceased student on this tragic loss. We also send condolences to the Chapman University community.”

While the investigation is still ongoing, CHP officials said the students were not under the influence at the time of the accident.

Wang was an award-winning student filmmaker and scheduled to graduate with a master’s degree in May 2022.