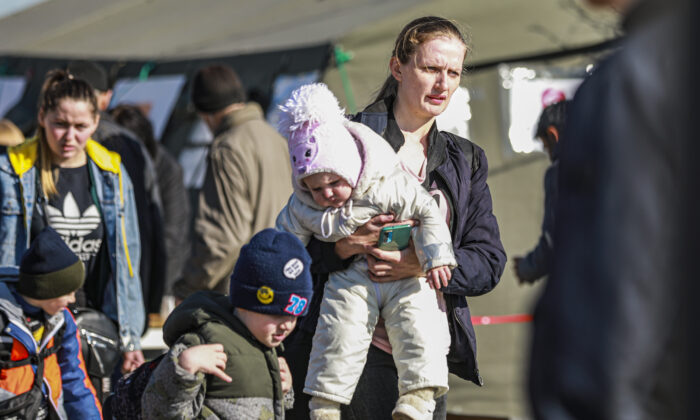 The project was created with the belief that the Department of Homeland Security’s Uniting for Ukraine program—which allows qualified Ukrainian refugees to enter the U.S.—should be giving priority to single mothers with children and the elderly.

“I want to help folks in similar situations as when I came to this country as a refugee,” Bazyler said in an Aug. 10 press release from Chapman University. “I feel like it’s my time to step up. I already have three children, but I feel like I have a fourth daughter named Ukraine—and that fourth daughter needs my attention.”

Since the Russia-Ukraine war began in February, more than 6 million Ukrainians fled their country for safety, according to the United Nations. Created in April 2022, the federal Uniting for Ukraine program permits refugees to enter the U.S. and be employed for up to two years if they can find sponsorship from an individual, business, or nonprofit.

Bazyler’s Ukrainian Mothers and Children Transport helps Ukrainians receive humanitarian parole and continues to support them in the U.S. by securing work permits and public benefits for them. Refugees are also given the opportunity to learn English and receive a safe refuge within the United States. Humanitarian parole allows people who are unable to obtain a visitor visa to apply to enter the U.S. based on urgent humanitarian reasons.

Bazyler started this project with the help of two current and former Chapman law students, Laura Evans and Sasha Seagull. The project enlists more than 35 immigration law attorneys, law professors, and student volunteers from around the country to find and assist Ukrainian refugees in the U.S.

Since May, Bazyler’s program has 11 active cases and receives new inquiries frequently. The documentation process can take months to be cleared and approved. In the Chapman press release, Laura Evans said about half are nearly completed.

Bazyler commented, “We basically created a pop-up immigration law clinic specifically for Ukrainians to deal with this emergency.”

One Ukrainian woman and her family were helped by Professor Bazyler referring their case to Harvard law students. In a letter shared with The Epoch Times, Dr. MaryAnn Seng described the family’s smiles.

“Because you are not able to see her grateful smile … I would like to let you know that the smiles of this family are the biggest and brightest smiles I have seen in 2022,” Dr. Seng wrote in the letter. “Thank you for being an excellent example of what true legal advocacy should look like.”

“Professor Bazyler’s project represents the type of community outreach to which we should all be aspiring,” said Cianciarulo. “Not only will it provide a crucial service for refugees, but also invaluable real-world pro bono experience for our students.”

Bazyler’s interest in helping refugees stems from his personal history as a Russian-speaking Jewish refugee who fled with his parents from communist Poland to the U.S. in 1964—when he was just 11 years-old. Bazyler’s mother was a child Holocaust survivor from Ukraine. Among Bazyler’s seven books and numerous law review articles are pieces covering the Holocaust.

He told The Epoch Times he felt freedom for the first time when he arrived in the U.S.

“My parents no longer had to warn me what subjects not to discuss outside the home,” he said via email. They survived by working many jobs and learning English.

“As a refugee, I want to help other refugees,” he said.