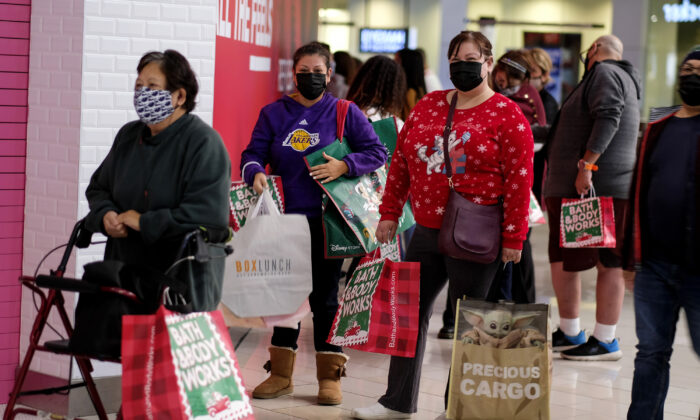 SANTA ANA, Calif.—Orange County retailers have much to look forward to during the holiday shopping season, though some red flags still remain, according to a Chapman University professor.

Raymond Sfeir, director of the A. Gary Anderson Center for Economic Research at Chapman University, predicts more shopping this holiday season than the last, though inflation is looming.

Consumer confidence is slipping due to inflation, which was “much higher” in October, growing at a rate of 6.2 percent, Sfeir told City News Service.

“That’s high,” he said. “It hurts now because your money does not go as far. If people want to get the same number of gifts as before, the same quality, it’s going to cost a lot more than last year.”

Price tags in supermarkets are showing prices “much higher than [the consumers] thought it would be,” which “gives them a bad taste,” he said.

Also, energy prices are rising, he said, not just at the gas pump, but when consumers pay the bill to warm their homes during the winter.

However, the federal government’s move to drive down gas prices by drawing from its oil reserves “is not going to make much of a difference,” Sfeir said.

Disagreeing with the Federal Reserve’s estimate, he believes the higher inflation rates are expected to carry over into 2022.

Nevertheless, according to Sfeir, several conditions allow people to shop more amid inflation this year: the availability of COVID-19 vaccines, the rise of e-commerce, more jobs, higher wages, better employment benefits, and a growing economy.

“COVID is still keeping us busy in one way or another,” Sfeir said. “But we are much better off than last year.”

Online shopping, which is going to be “more the norm now,” is on the rise this year, though not as much as last year’s increases of 25 to 28 percent, Sfeir said. “The level is already so high that it cannot sustain very high, double-digit increases.”

As for employment, 5.8 million jobs were added in October, which is “a sizable number” compared to the same time last year, Sfeir said.

In addition to more people working and earning, the wages are higher, and the benefits are better; the employment cost index is 4.6 percent higher than last year, and people are “prone to spending more,” he said.

Also, “the economy as a whole is still growing,” which might continue into the fourth quarter and even next year “at a decent level,” he said. “We’re forecasting 5.6 or 5.7 percent and 4.4 percent next year.”

Unlike last year under quarantine conditions, consumers are out more and spending, as indicated by the growth of credit card usage compared to previous months, Sfeir said.

Orange County’s economy, which depends “a great deal on tourism and the hospitality industries that serve it,” is “recuperating a little faster than the rest of the nation because [the county] got hit harder than [the rest of the nation] did” by the pandemic, Sfeir said.

Compared to September, Orange County added 20,000 jobs in October, which is the number added in all of 2019, Sfeir said. “It’s a very large number, and that’s because we were lagging way behind the nation before.”

“Next year, our employment will grow at a faster rate than the rest of the nation,” he said.

He attributed recent shipping traffic jams to an increase in e-commerce and supply chain issues, which he considers to be related to the pandemic.

Nonetheless, Sfeir doesn’t expect shoppers to have much trouble hunting down toys for their children this year.

“I think there’s so much merchandise in our stores,” he said. “There may be some items, some toys you cannot find, but that is not a big deal. You’ll find another toy for your child.”

“All in all it’s going to be a good holiday season for everyone,” he said. “The retailers will be happy to make up for a previously slow market.”