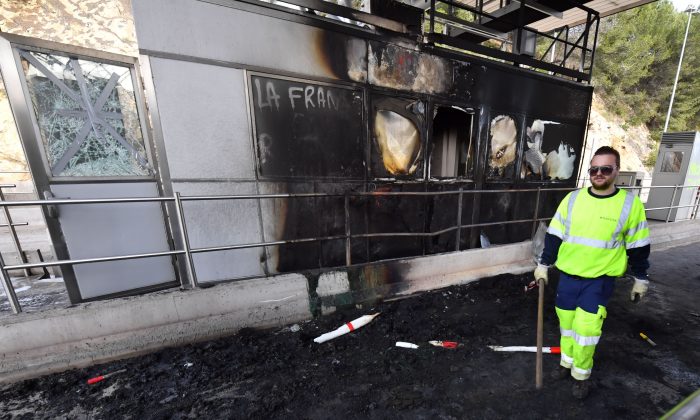 A worker of French construction group Vinci stands near a damaged payment booth a day after the highway toll was set on fire in Bandol, near Marseille, southern France on Dec. 18, 2018. (Gerard Julien/AFP/Getty Images)
Europe

France’s biggest toll-road operator, Vinci Autoroutes, said there were demonstrations at about 40 sites along its network and that some highway intersections had been damaged.

Protesters set fire overnight to the Bandol toll station, east of Marseille, forcing the closure of the A50 highway that connects Marseille and Toulon, said Vinci. The company’s network is mainly in the south and west of France.

“Motorists should take utmost care as they approach toll gates and motorway access ramps, due to the presence of numerous pedestrians,” Vinci said in a statement.

Several people have died in roadside accidents at yellow vest roadblocks in recent weeks, mostly at the many roundabouts blocked by groups of demonstrators.

The “yellow vests” protesters—named after the fluorescent jackets that French motorists must have in their cars—have blocked roads and roundabouts across France since mid-November.

The demonstrations, which began as a protest against fuel tax increases, have morphed into a wider backlash against the liberal economic policies of French President Emmanuel Macron. While protesters took to the streets of Paris and other cities on Dec. 15, the fifth weekend of demonstrations, the crowds were noticeably smaller than in previous weeks after Macron announced tax and salary concessions.

Vinci estimates the damage to its installations since the start of the protests will cost “several tens of millions” of euros, not including lost revenue, as the protesters have allowed thousands of motorists onto the highways for free. It had planned to send invoices to motorists who drove through toll booths without paying and whose license plates were captured on surveillance cameras, but on Dec. 18 backed down.