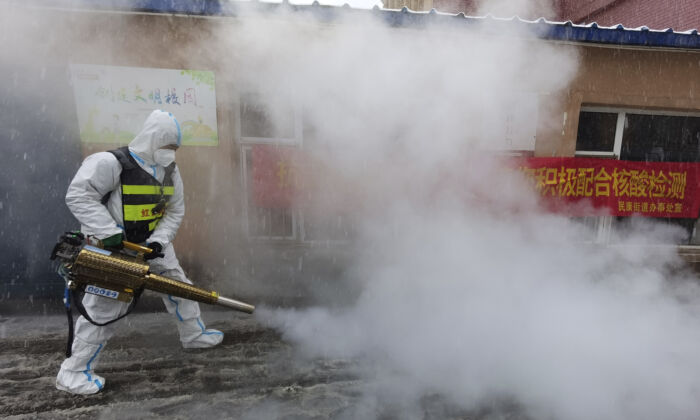 A volunteer disinfects the area as it snows during the COVID-19 lockdown in Changchun in northeast China's Jilin province on March 12, 2022. (Chinatopix Via AP)
INSIDE CHINA

A lockdown of Changchun city has been going on for more than a month; with nine million people relying on one food distribution channel controlled by the authorities. Local residents reported that incidents of hunger and suicide were left uncared for.

A local resident confirmed the situation to the Chinese Epoch Times. Local officials’ recent actions also implied the reality of the starvation.

On April 10, police put a man in 7 days detention and gave him a 300 yuan ($47) fine for organizing a “pot knocking operation with the intention to pressure the government,” Changchun security bureau reported.

Hitting Pots and Pans to Ask for Help

Local resident Mr. Bai said that the recent epidemic in his complex, Evergrande City, has been serious. Occupying a land of approximately 196 acres, the complex has more than 20 high-rise buildings, a total of 1,816 apartment units.

He explained that except for one or two buildings, Omicron positives were seen in almost all other buildings. The markets near the community are closed. Residents ran out of food while cases continue to rise.

Commenting on an April 6 video of residents in the Evergrande shouting “Help us!” and hitting pots and pans, Bai said the shouting had an effect.

On the evening of April 7, free vegetables were delivered to the community, and the volunteer distributors told the residents to show their gratitude to the Chinese Communist Party. But on April 8, the vegetables arrived with a price tag of 50 yuan ($7.84).

According to Bai, similar incidents were seen on Chinese social media such as WeChat and Douyin after the Evergrande City incident; both English Town with 2,856 units and Vanke New Mileage with 3,282 units have videos showing residents asking for help by hitting pots and pans.

After the lockdown began on March 11, the authorities heightened the restrictions to static management on March 28, banning all mobility. The entire city further engaged in a zero-COVID campaign to extinguish the virus whenever it’s found. A Chinese official explained “the ‘dynamic zero-COVID’ strategy requires that we detect and identify infected cases as quickly as possible, take measures to cut off new sources of infection and protect vulnerable people.” However, new cases still emerge and the lockdown continues as the campaign fails.

Mr. Ma said, “People made fun of the dynamic zero-COVID as it was going into its 5th season [in a new year]. The officials are indeed reckless in implementing the policy.”

Residents are seriously lacking in food. The city controls supplies and blocks almost all other channels; but the efficiency is not there.

Ma said, “At the beginning, a local vendor helped the neighbors to get some meat and veggies, but on April 3, it’s all banned. Millions of people rely on one distribution channel. You could imagine the quality and price. There are people surely profiting by taking advantage of the national disaster.”

Ms. Yang said her community has gone through the PCR tests more than 20 times, and there are still new infections.

She said the community gate was sealed shut and there are positive test results in every building. The situation is horrible, “There are only ambulances and police cars on the streets,” Yang said.

There’s no food, and people aren’t allowed to go downstairs; as for the free food from the government, she said she hasn’t ever seen it.

She described the current static management as useless to contain the virus, but only effective to restrict people, “There’s no way out. There are people who committed suicide, jumped off the building … but no one cares.”

Changchun, the capital of Jilin Province, is known as the Detroit of China for its popularity in auto manufacturing. The city was locked down on March 11; the entire province went into lockdown shortly after.