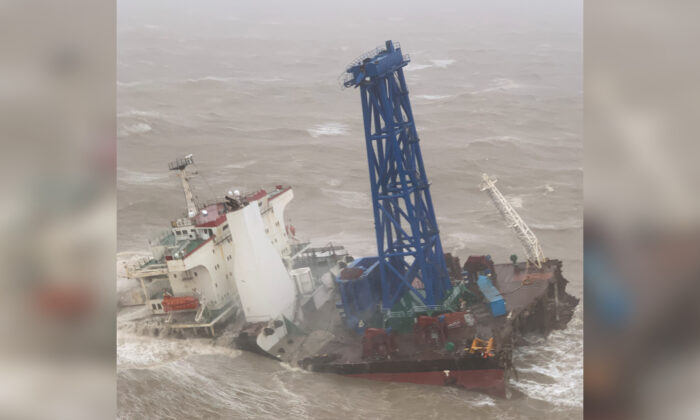 A vessel is sinking after it snapped in two as Typhoon Chaba passed through, in waters off Hong Kong on July 2, 2022. (Hong Kong Government Flying Service/Handout via Reuters)
Hong Kong

BEIJING—Twelve bodies were recovered on Monday from waters southwest of Hong Kong after an engineering vessel snapped in two as Typhoon Chaba passed through, a Chinese state television station said.

The bodies, suspected to have drowned, were retrieved about 50 nautical miles from where the stricken ship sank, maritime authorities of China’s southern province of Guangdong said.

Four of its crew were rescued by Monday.

The sunken vessel, “Fujing 001,” with a crew of 30, was at an anti-typhoon anchorage in waters near Yangjiang in Guangdong when its anchor chain snapped.

China’s first typhoon of the year, Chaba skirted Hong Kong but brought heavy rain and wind to southern provinces already water-logged from weeks of torrential rain and thunderstorms over the weekend.

It weakened into a tropical depression on Monday, but was expected to shower central and southern regions with heavy rain for several days as it moved north, forecasters said.