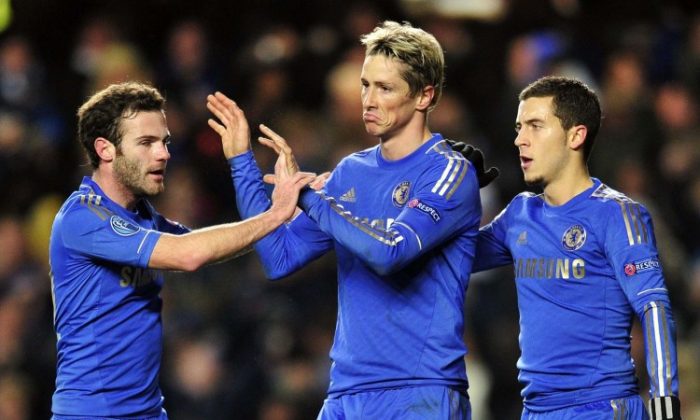 Chelsea’s Fernando Torres (C) reacts after scoring his team’s second goal. Chelsea was knocked out of the Champions League despite a big win on Wednesday. (Glyn Kirk/AFP/Getty Images)
Soccer

Champions League title-holder Chelsea became the first team to be eliminated the following season at the group stage, while defending English Premier League champion Manchester City was knocked out a day earlier.

Manchester United and Arsenal reached the Round of 16, although they both lost their final group stage matches.

The group stage was a major success for Germany with all three clubs winning their respective groups.

The teams to advance are (in order of winner followed by runner-up):

In Group D, a group that featured the champions of Germany, Spain, England, and Holland, English champion Manchester City failed to win a game and finished in last place with three points from six games. Borussia Dortmund won this “Group of Death” or “Group of Champions” finishing ahead of Real Madrid.

The highly anticipated draw to determine the Round of 16 matchups will take place on Thursday, Dec. 20, in Nyon, Switzerland. Group winners will be paired with group runners-up for a home-and-away series in the Round of 16. The Round of 16 will begin in mid-February and conclude by mid-March.

There are a number of possibly mouth-watering clashes that could arise. A couple of those include Manchester United–Real Madrid and Barcelona–Arsenal in a rematch of the 2006 final.

The final will be played at Wembley Stadium in London on Saturday, May 25, 2013.