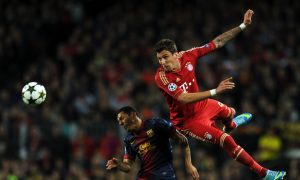 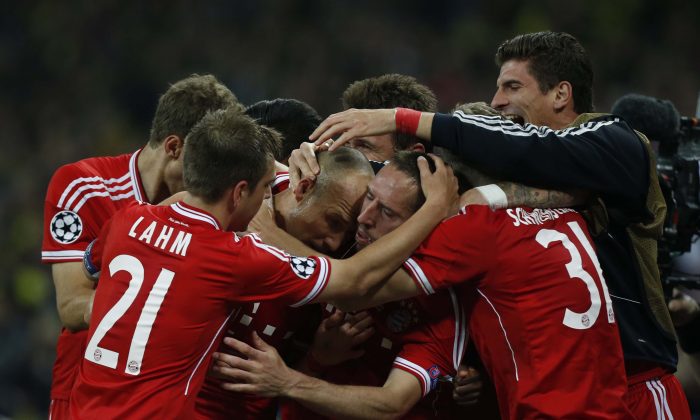 The Champions League Final winning goal was scored in the 89th minute by Arjen Robben to give Bayern Munich their fifth European crown after a 2–1 thriller over Borussia Dortmund at Wembley Stadium in London.

The Dutch striker looked like he was going to have a nightmare of a final after missing chance after chance in the first half, but he set up the opening goal and ensured his place in history by scoring the winner.

It was a heartbreaking loss for Borussia Dortmund, Champions League winners in 1997, who have come up second best to Bayern Munich once again.

Bayern lost in three of the last four Champions League finals including last year at their home stadium to Chelsea. But they were more organized and proved to be stronger after weathering an early storm from Dortmund.

Bayern Munich and Borussia Dortmund were facing off for the fifth time this season with Bayern undefeated in the prior four matches (two wins and two draws). Dortmund came into the final winless in their last four games (in all competitions).

Dortmund took the initiative as the match started after an interesting opening ceremony featuring a mock battle between armies in black and yellow representing Dortmund and red and white representing Munich.

The goalkeepers took center stage with some brilliant saves. Firstly, Bayern’s Manuel Neuer kept his team in the match with a great reaction leg save off a quick shot from Jakub Blaszczykowski in the 14th minute.

Marco Reus and Sven Bender then had chances but Neuer came up with fairly straightforward saves.

But Bayern then started to get their foot in the game as they found room on the flanks. Dortmund keeper Roman Weidenfeller made a terrific save off a close range header from Mario Mandzukic in the 26th minute before stoning Robben who was in all alone from the right flank four minutes later.

A theme of the first half was Robben’s wastefulness on great scoring chances. Just before the end of the first half, he latched on to a long looping ball, but couldn’t lob Weidenfeller who wound up making the save with his face.

But Robben began to re-write the script on the hour mark by setting up Mandzukic for the game’s opening goal. Franck Ribery found the Dutchman, who managed to remain onside in the 18-yard box, with a clever pass on the ground.

Robben then drove to the goal line before sending a cross that made it through both Weidenfeller and defender Marcel Schmelzer. Mandzukic was on hand to volley it into the open net.

The challenge for Dortmund then became how to respond given the lack of success they’ve had against their archrivals.

But just eight minutes after the Mandzukic goal, defender Dante committed a bad foul on Reus and Dortmund was awarded a penalty shot.

There was no doubt about the foul and certainly Dante could have been sent off had he received his second yellow card for the foul.

But Italian referee Nicola Rizzoli was content to let Dante stay on the pitch and Ilkay Gundogan calmly slotted the penalty kick home.

The match had some end-to-end action and Neven Subotic in the 73rd minute came up with the defensive play of the match. He got to a ball heading for the goal line just before Ribery and cleared it to safety when it seemed certain Bayern would score.

Weidenfeller then came up with two more terrific stops off David Alaba and Bastian Schweinsteiger. Bayern was in the ascendancy as Dortmund looked disorganized and lacking attacking ideas.

And finally as the match approached injury time, Robben picked up a loose ball at the top of the 18-yard box and calmly moved in on the Dortmund goal. He sidestepped a challenge, resisted the urge to blast the ball before tapping it gently past Weidenfeller.

It was a classy goal that showed the incredible skill of Robben. Three touches, all with his left foot, were all he needed in the tight space he had to work his magic.

Bayern Munich are once again champions of Europe. They have easily won the Bundesliga and now have the German Cup to play for to complete a season that will live on for ever in German football.