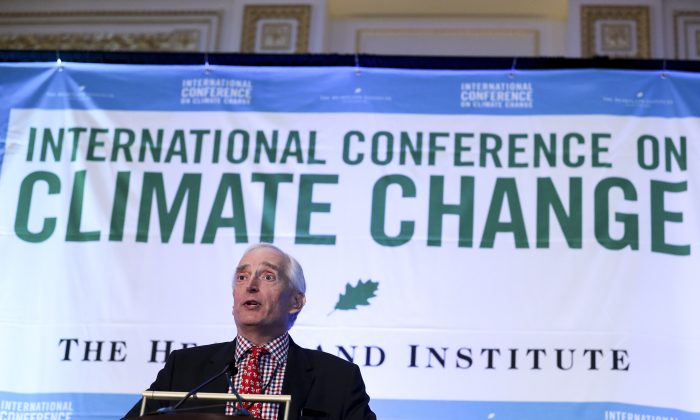 Lord Christopher Monckton speaks at ﻿the International Conference on Climate Change by The Heartland Institute at the Trump International Hotel in Washington on July 25, 2019. (Samira Bouaou/The Epoch Times)
Viewpoints

Challenging the Left’s Climate Alarmism Narrative Is Daring and Dangerous

For decades, those pushing global warming/climate change have tried to silence any opposition to their narrative.

Instead of debating the issue, the climate alarmists would rather tar and feather, figuratively speaking, anyone who is brave enough to challenge their assertions.

Pressley calls Heartland a “shadow” organization, insinuating that Heartland simply does the bidding of Big Oil.

This, however, is completely untrue.

For several years, The Heartland Institute, a libertarian think tank, has been a thorn in the side of climate alarmists because Heartland has produced an extensive amount of scientific research that calls into questions many of the absurd, baseless claims made by the likes of Al Gore and John Kerry.

First, Heartland research on climate change has been cited more than 100 times in peer-reviewed journals.

Third, Heartland has always had science on its side. Claims of a “scientific consensus” in favor of climate alarmism have been debunked again and again.

Fourth, and perhaps most importantly, Heartland’s flagship publications on climate change, the five-volume “Climate Change Reconsidered” series published with the Nongovernmental International Panel on Climate Change (NIPCC) from 2009 to 2019, were produced without a dime of financial support from any corporations, energy or otherwise.

Yet, these facts don’t matter to the merchants of smear.

All accusations that oil industry funding somehow influenced or corrupted the work of climate scientists or organizations such as The Heartland Institute are based on lies originating in then-Sen. Al Gore’s office and then repeated endlessly in an echo chamber created by Greenpeace and activists posing as journalists in the so-called mainstream media.

In truth, the mission of The Heartland Institute when it comes to climate change is quite simple: follow the facts, not the feelings.

Heartland’s primary objective has always been to educate elected officials, civic and business leaders, and the general public about the true science and economics of climate change. Climate change is far from the only public policy issue in Heartland’s wheelhouse.

Heartland is a highly respected voice on health care, school reform, taxes and budget issues, and other public policy matters. State elected officials in all 50 states rely on Heartland as an objective and credible source of research and commentary on the most important issues of the day.

Moreover, The Heartland Institute doesn’t “deny climate change.” In fact, Heartland documents how climate has changed in the past and continues to change today, and studies its causes and consequences. Along with thousands of highly qualified scientists around the world, Heartland finds the human influence on climate to be small—probably too small to measure against the background of natural variability—and the case for restricting the use of fossil fuels to be very weak.

To be clear, Heartland’s position in the scientific debate, and that alone, is why Heartland has become the primary target of criticism from the Democratic Party and its cronies in the media. The left’s antipathy toward Heartland has little, if anything, to do with funding, ethics, or credibility.

Lastly, The Heartland Institute doesn’t “oppose climate science.” Heartland actually helped create and promote it. Heartland has published thousands of pages of reviews of the peer-reviewed literature in volumes that have been compared favorably to the reports of the Intergovernmental Panel on Climate Change (IPCC). Heartland has invested more, and published more, and reached more people with real climate science than all but a handful of national organizations in the United States.

Pressley’s attempt to smear The Heartland Institute is based on the fact that The Heartland Institute’s courageous position in questioning climate alarmism dogma poses a viable threat to the left’s climate change narrative, which is integral to their insatiable lust for more power and control over “We the People.”