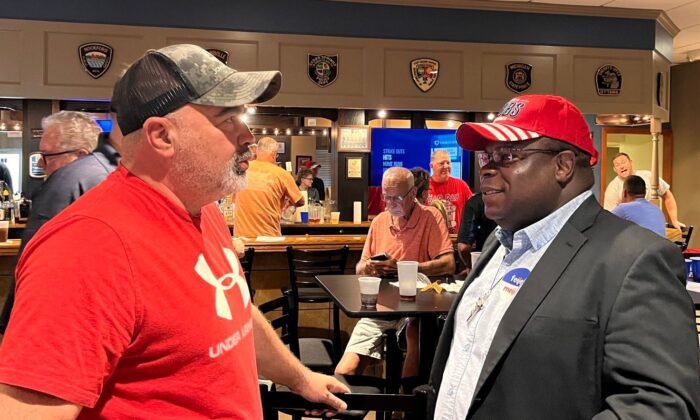 Meijer was one of 10 House Republicans who voted to impeach then-President Donald Trump after the Jan. 6, 2021, Capitol breach. Trump endorsed Gibbs for the GOP nomination.

Gibbs will face Democrat Hillary Scholten in November’s general election in a redrawn 3rd District that once favored Republicans, but is now friendlier to Democrats. Scholten ran unopposed.

Gibbs was a U.S. Department of Housing and Urban Development (HUD) official during the Trump administration. He was appointed by Trump to lead the Office of Personnel Management but wasn’t confirmed by the U.S. Senate.

Gibbs grew up in the Lansing area, and didn’t live in western Michigan until last year.

He earned a bachelor’s degree in computer science from Stanford University and a master’s degree in public administration from Harvard University, served as a missionary in Japan, and worked in Silicon Valley as a software engineer before his role at HUD.

Meijer graduated from Columbia University and is the son of Hank Meijer, the executive chairman of the family-owned Meijer grocery chain. He served in the Army Reserves from 2008 to 2016, including a one-year deployment to Iraq.

Meijer voted to impeach Trump three days after the freshman legislator was sworn into the 117th Congress.

On Aug. 1, in a column that appeared on the Substack page Common Sense, Meijer criticized the Democratic Congressional Campaign Committee (DCCC) for intervening by spending $435,000 in advertising to bolster Gibbs.

While the spot appeared to attack Gibbs, it also provided airtime for a campaign that didn’t have the funds to increase its name recognition on television in the Grand Rapids market, which critics say was the DCCC’s ultimate objective.

Meijer wrote that it would seem like “the Democrats would look at John Gibbs and see the embodiment of what they say they most fear. That as patriots they would use every tool at their disposal to defeat him and similar candidates that they’ve said are an existential threat. Instead, they are funding Gibbs.”

Meijer added that the ad purchase “was more than Gibbs raised over the entire duration of his campaign” and was almost 100 times what Trump provided to Gibbs, which amounted to “a single $5,000 contribution from the Save America Super PAC.”

“In other words, the Democrats are not merely attempting to boost a candidate over the finish line: They are subsidizing his entire campaign,” Meijer wrote.

Meijer was funded by organizations such as a super PAC called Principled Leadership for Michigan, which provided more than $750,000 to his campaign, according to disclosures. He also received $10,000 each from Majority Committee PAC, which is led by House Minority Leader Kevin McCarthy; the leadership PACs of Minority Whip Steve Scalise (R-La.) and Rep. Adam Kinzinger (R-Ill.); and $5,000 from the leadership PAC of Rep. Liz Cheney (R-Wyo.).

On the day of the primary election outside a voting precinct in Grand Rapids, Meijer talked about the homes he’d visited across the district while meeting voters face-to-face and acknowledged that some residents questioned his vote to impeach Trump.

“Some folks have said they didn’t like that vote, but they don’t want the seat go to a Democrat,” Meijer said. “And they said they have liked many of my other decisions.”

Meijer is “unelectable in November,” Gibbs said before casting his vote on Aug. 2 in Byron Center, because the freshman legislator voted to impeach Trump and also “voted for the gun control bill.”

“Those are just two reasons why many Republicans would not support him in November,” Gibbs told The Epoch Times.

Gibbs expressed confidence that his grassroots following would help him defeat Meijer.

“Money does matter—yes,” Gibbs told an audience during a campaign stop at a Baptist church in July. “You need enough money to get your name out there and pay your staff. But it doesn’t quite mean what it used to. People are getting sick of money being able to buy elections.”

While a Democrat hasn’t represented the 3rd District in Congress since 1993, the redrawing of the district has analysts such as the Cook Political Report, Inside Elections, and Sabato’s Crystal Ball rating the general election as a toss-up.