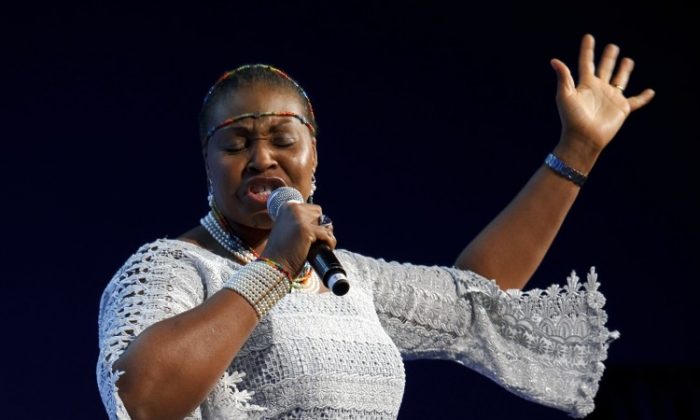 Chaka Chaka, the ‘Princess of Africa’ Inspires a Nation

Yvonne Ntombizodwa Moloko Machaka, or Chaka Chaka’s rise from the townships of Soweto to become a South African superstar and the “Princess of Africa,” shows a remarkable parallel with the liberation of black South Africans, African women, and perhaps the whole of Africa. Today she continues to inspire people through her music and her dedication as a UNICEF goodwill ambassador.

She was recently recognized at the World Economic Forum in Davos, Switzerland, in January, becoming the first African to win the prestigious Crystal Award—an honor given to distinguished artists who use their talents to better the world.

“You have made all of South Africa proud to claim you as a national icon,” Nelson Mandela told her after apartheid was abolished.

Growing Up Under Apartheid

Yvonne Machaka was born in a poor family of five in Soweto, in 1965. From a young age, she enjoyed singing in school choirs and at church, but she never dreamed of doing it professionally.

Artists were simply not taken seriously. There was no way, for example, that a black musician could get a loan from a bank.

Instead she wanted to become a lawyer, as her mother suggested.

But music was part of the fabric of life. As a little girl, her father would play records and the family loved singing together. It was also a custom in the townships—and still is today—to blare music outdoors, getting the whole community singing and clapping.

“My dad had a great voice, I think I got my voice from my father,” said Chaka Chaka.

Her father hid Miriam Makeba records at home, as her songs were banned by the South African regime because her lyrics were considered rebellious. The anti-apartheid singer was the first big artist to bring African music to the West.

“When my father played Miriam Makeba songs, he would shut the doors and play the music very low,” recalls Chaka Chaka.

When she was 11, her father passed away. Her mother, a domestic worker, became the sole breadwinner.

On top of that, the apartheid government confiscated their house since “her mother now was a single black mother.” They ended up living in one small bedroom at her mother’s workplace. In these miserable conditions Yvonne felt deeply frustrated with the white regime.

“She said to us I want you girls to go to university and acquire as much knowledge as possible. So you can become independent from any man or anybody, and can do things for yourself.”

About that time, at the start of the uprising in 1976, Chaka Chaka witnessed white people in military cars randomly shooting at black people in Soweto.

When Chaka Chaka was 13 in 1981, she became the first black child to appear on South African national television, in a talent show called “Sugar Shack.”

“But that was not a big deal at all, we didn’t even have a television at home to watch myself. Very few households had television in that time, so who saw me?” says Chaka Chaka.

With a voice inherited from her father, a mind disciplined by her mother, and her own invincible spirit, she managed to transcend adversity not by denouncing her background, but by staying true to it.

At the age of 19, she accompanied a friend who was invited to sing at Dephon Records studio in Johannesburg. But the producer, Phil Hollis, a white man, was more impressed by Chaka Chaka.

“It was just amazing. It was said on the radio. … But each time I would switch off the radio because I was afraid my mother would hear.”

Chaka Chaka continued recording hits for two years while keeping her success a secret from her mother.

But when she turned 21 she had reached the legal age to sign a contract and was forced to tell her mother.

“Just let me sing, because I love singing in church and in school and I will continue studying,” she told her mother. But she was not impressed.

So Chaka Chaka resolved to continue studying whenever she could.

At university, Chaka Chaka had to withstand strange looks from her fellow students, who knew her as a superstar, and criticism from her manager who couldn’t figure out why a superstar would bother getting a degree.

But she knew what she was doing. “In South Africa, if you just sing and have nothing to fall back on, you are as good as nothing,” she said.

Chaka Chaka obtained two degrees at the University of South Africa—in local government, management and administration and adult education—as well as a Certificate of Speech and Drama from Trinity College in London.

“You know, I look back today and think that was a very smart thing to do.”

Continued on the next page: Walking a Tightrope During Apartheid