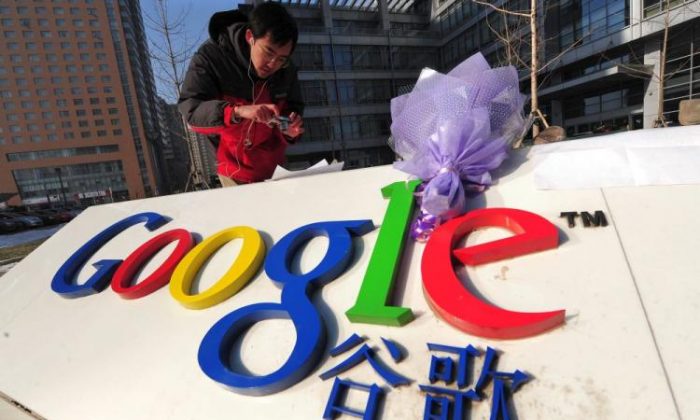 A bouquet of flowers lay upon the company logo as a man photographs a commentary placed beneath a rock outside the Google China headquarters in Beijing on January 14, 2010. (Frederic J. Brown/AFP/Getty Images)
Australia

Critics of Google and Facebook have compared the tech giants’ recent actions to the behaviour of the Chinese Communist Party (CCP), as the long-running dispute over an Australian media payment law continues.

“I would just like to take you back to the prime minister announcing that Australia would like to see an inquiry into the origins of COVID-19. The Chinese response to that was to threaten our market, to threaten our trade,” Patrick told Google Australia Managing Director Mel Silva during a Senate committee hearing into the Code.

“We’ve got a similar situation here where the Australian government is leading on a proposal in relation to the Wild West web,” he said. “Our government steps out first, and the very large organisation that is Google threatens to leave our market.”

The News Media Bargaining Code, introduced last year, legislates a framework that will allow Australian news outlets to enter negotiations with the tech giants to be compensated for displaying their content.

Google and Facebook have remained defiant, with both companies toying with removing news content from their platforms altogether in Australia.

“What we found with the development of the internet is the rights of the newspaper and television organisations in gathering and producing news, is being lost and this is severely damaging,” the emeritus professor in law told The Epoch Times.

“So, what is happening is they’re (Google and Facebook) killing the goose that laid the golden egg,” he added.

Flint compared the intellectual property (IP) issues to how the CCP bolstered China’s economic and technological growth via IP theft from western companies.

“How is it that so soon after the Cultural Revolution, which wrecked the country … How is it the countryside was able to quickly develop so many products and produce it on the mainland?” he said.

Flint also said the tech giants were concerned about setting a precedent that could usher in a global domino-effect of regulation aimed at curbing their market power.

Peter Lewis, director of the Centre for Responsible Technology at The Australia Institute, cited an old Chinese saying in response Big Tech’s threats, “Right now Australia is confronted by Big Tech’s big stick. ‘The threat to kill one in order to warn a hundred.’ Chairman Mao would have approved!”

“Let us be clear. What Google and Facebook are really terrified of is the existence of this legislation because it would provide a global model for addressing the impact of their market dominance of the advertising industry and … the impact of the collapse of fact-based news journalism on our sense of civics and civility,” he told the Senate committee.

He went on to say that Australian businesses and government departments were overly reliant on Google technology, including Google Maps, Docs, and Gmail, and they needed to change the way they operate.