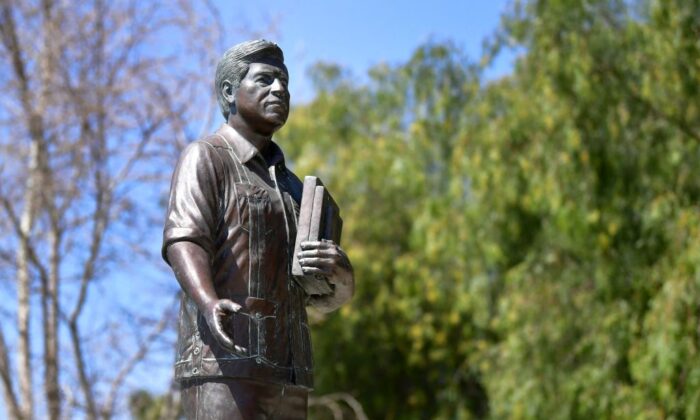 The statue of Cesar Chavez is seen in San Fernando, Calif., on March 30, 2021. (Frederic J. Brown/AFP via Getty Images)
Viewpoints

Gustavo Arellano, an excellent reporter, just published a column in the Los Angeles Times, “Cesar Chavez’s grandson wants to introduce his ‘Tata’ to a new generation.” Arellano asked the grandson about the grandfather’s “long-standing opposition to illegal immigration, stances that have made him an unlikely cudgel for anti-immigrant activists.”

The grandson responded: “‘Is that something we’re proud of? Absolutely not,’ Andres said. ‘But my Tata supported [the 1986] amnesty. By calling him anti-immigrant, you give corporations a big pass on the atrocities of what they were doing. They don’t care about workers—my Tata did. We need to get context like that out there.”

Arellano provided some of the context. I’ll provide some more. Private unions such as the United Farm Workers are different from unions for government workers, such as the California Teachers Association, which today unfortunately now dominate the union sector. The latter gain most of their power from manipulating the political system. If costs go too high, the politicians they elected just raise taxes.

For private unions, it’s different. They also can manipulate the political system by electing favored politicians. But they still ultimately work for a private employer, such as a farm company. If labor costs go too high, the company goes bankrupt and all the workers are laid off.

The company, naturally, wants to cut costs as much as possible to make a profit. One way to do so is mechanization: better, high-tech farm equipment to replace the workers. Another way is to hire cheaper, non-union workers. These are called “scabs.” The unions hate it, protest against it, and try to get the politicians to ban or limit it.

I grew up with this in Michigan in the 1960s and 1970s with the auto industry, which at the time produced half the jobs in the Detroit area. The United Auto Workers every couple of years went on a massive strike for higher wages and benefits. The strikes were like electricity in the air. Sometimes the company being struck would hire scabs to do the work. The scabs would have to cross picket lines and face abuse, even assaults, by the picketers, requiring police protection.

Over time, a balance was achieved. The UAW got some concessions and the workers went back to work. Until the horrible 1974 recession, the Detroit Metro Area enjoyed the highest living standard in the world.

Farm work is different, but the economics is similar. To cut costs, the farm companies hire scabs to replace striking workers. Those scabs were, obviously, illegal immigrants. If Cesar Chavez had not opposed illegal immigration, which provided the scabs the companies hired, his United Farm Workers union would have had no purpose. He would have achieved nothing and would be unknown today.

Arellano’s recent article links to an article he wrote on March 29, 2021, “Woke California pays homage this week to another American hero with a complex legacy.” He wrote of Chavez, “He opposed undocumented immigrants to the point of urging his followers to report them to la migra [immigration authorities].”

Chavez fought illegal immigration tenaciously. In 1969, he marched to the Mexican border to protest farmers’ use of illegal aliens as strikebreakers. He was joined by Reverend Ralph Abernathy and Senator Walter Mondale [later vice president].

In the mid 1970s, he conducted the “Illegals Campaign” to identify and report illegal workers, “an effort he deemed second in importance only to the boycott” (of produce from non-unionized farms), according to [biographer Miriam] Pawel. She quotes a memo from Chavez that said, “If we can get the illegals out of California, we will win the strike overnight.”

The Illegals Campaign didn’t just report illegals to the (unresponsive) federal authorities. Cesar sent his cousin, ex-con Manuel Chavez, down to the border to set up a “wet line” (as in “wetbacks”) to do the job the Border Patrol wasn’t being allowed to do. Unlike the Minutemen of a few years ago, who arrived at the border with no more than lawn chairs and binoculars, the United Farm Workers patrols were willing to use direct methods when persuasion failed. Housed in a series of tents along the Arizona border, the crews in the wet line sometimes beat up illegals, the “cesarchavistas” employing violence even more widely on the Mexican side of the border to prevent crossings.

None of this was unknown to or opposed by Cesar Chavez. As Pawel notes, “As always, Cesar protected Manuel at all costs… Manuel was willing to do ‘the dirty work,’ Cesar acknowledged.”

It’s also worth remembering it was the Republicans who used to favor more open borders, because they represented the anti-union forces that brought in the scabs, while the Democrats were the anti-immigrant party because they were close to the private-sector unions.

A respected, bipartisan federal commission issued a sweeping blueprint Friday for reform of immigration policy, calling for cutting off most public benefits to illegal immigrants, creating a much-disputed computerized registry for job eligibility and making it tougher to illegally cross the border.

“If a person is here unlawfully, he should be entitled to no benefits,” said former Texas congresswoman Barbara Jordan, chairwoman of the U.S. Commission on Immigration Reform.

“Illegal aliens … broke the law to get here. They never intended to become a part of our social community and they are not entitled to benefits.”

However, Jordan balked at denying public education to illegal immigrants, one of the central aims of Proposition 187, the anti-illegal-immigration initiative on California’s November ballot.

“I just regret that the political atmosphere and environment in the state of California has yielded such an ill-considered proposition,” Jordan said in impromptu comments after the report was released.

Prop. 187 passed later this year, but the federal courts threw it out. For the record, I wrote editorials in the Orange County Register opposing Prop. 187. Our main objection was it turned nurses and teachers into spying government agents.

Then in 1995, it was none other than Democratic President Bill Clinton who signed a tough immigration law. The government archives for his administration include this quote from his 1995 State of the Union address: “We are a nation of immigrants. But we are also a nation of laws. It is wrong and ultimately self-defeating for a nation of immigrants to permit the kind of abuse of our immigration laws we have seen in recent years, and we must do more to stop it.”

And this is the Clinton archives’ summary of his program (boldface in original):

This Administration inherited a serious illegal immigration problem as a result of a decade of failed immigration policies.

The Administration Has a Four Point Plan to Deal With Illegal Immigration. The Clinton Administration has made the strongest commitment to fighting illegal immigration in history. In the 1996 budget, the President called for a $1 billion increase to combat illegal immigration through border control, work site enforcement, removal of criminal aliens, assistance to States, and other key initiatives.

Border Personnel—By the end of 1996, we will have increased overall Border personnel by 51% at the Southwest border.

Of course, things are different today. My final point is one should not be surprised at a labor leader trying to help the workers he represents by limiting the supply of scabs. It was simple labor economics.

I certainly am a free-marketer. But I also understand there must be a balance in the private sector between management and labor—between capital and the workers. A century ago the big industrial corporations wielded immense power over the country. A “countervailing power,” to use liberal Democratic economist John Kenneth Galbraith’s phrase, arose in the form of labor unions.

With difficulty, free and democratic societies over time allow these things to develop, along with so many others.

As do all of us, Cesar Chavez had defects to his character, brought up in Arellano’s two articles and the Pawel biography. But resisting the farm companies bringing in illegal immigrants to take the jobs of his workers was not one of them.