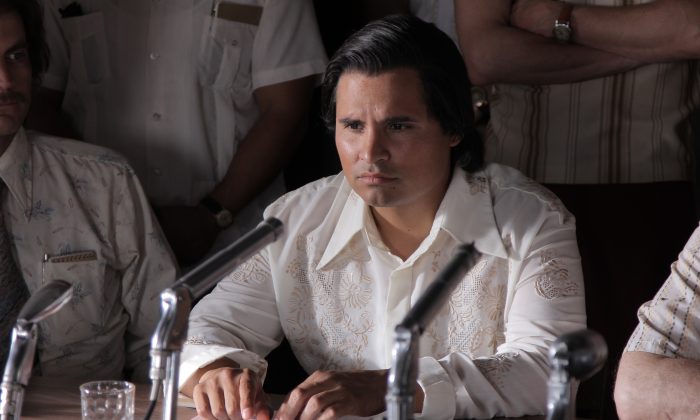 Both of these biopics were given a “greatest hits” treatment. Both suffer from it.

We all know who Jesus was, but most folks tend to mix up Cesar Chavez with Che Guevara. The reviewer won’t lie to you. So did he.

Who was Cesar Chavez? He was a Mexican-American labor activist, whose life’s work included co-founding the United Farm Workers union. Cesar Chavez was the Latino Martin Luther King Jr.

In the 1960s, President Richard Nixon and California Governor Ronald Reagan had no problem with the way agricultural producers trod migrant workers’ faces into the mud with their shiny loafers.

The workers (mostly Mexican and Filipino) were given slave wages and no bathrooms in the field, among other things. Chavez got California vineyard owners to the negotiating table to remedy the injustice.

How did he do that? Nonviolence. Cesar Chavez was the Latino Gandhi.

Chavez’s family lost everything in Arizona during the Depression and moved to California, where he became a child laborer in the fields from the age of 11. As an adult, Chavez (Michael Peña) moves back to Delano, Calif., with his wife Helen (America Ferrera) and eight kids to pick grapes. Very Steinbeckian.

Having had early experience in union issues, he sets up a credit union for his fellow workers. He calls a strike. It lasts five years. He and his fellow protesters march 300 miles to Sacramento.

They target and boycott one wine manufacturer, shut him down, then go after another—John Malkovich’s character, Bogdanovich, a vineyard owner with a terrible toupee.

We see Chavez tamp down internal uprisings. He silences those who would play Malcolm X to his M.L.K. by going on a 25-day hunger strike to uphold nonviolence. This gets him the support of Robert F. Kennedy.

Strength regained, Chavez sets out for England, where he gets further support for a boycott on California table grapes grown by vineyards disregarding the strike.

With resistance from growers, the police, and from inside his own worker-movement, Cesar’s got his hands very full. Who usually suffers in these cases? The family. His relationship with his eldest son suffers most.

You go to the movies, you want to feel something. We don’t get to feel much here. It’s not the acting—the acting, overall, is fine. It’s a very professional crew. The writing is a bit thin and doesn’t give the actors much to work with—especially Peña, Malkovich, and Rosario Dawson as fellow activist Dolores Huerta. Peña’s proven himself a powerhouse, when he’s got a juicy role. Chavez should have been a juicy role.

As Chavez’s wife, Ferrera is the only one able to make much of an impression, simultaneously fighting alongside him in the activist trenches and bearing the full responsibility of raising the family.

Basically, if you need a history lesson, “Cesar Chavez” is not a bad way to go. We need histories of heroes. However, you can find more history on Wikipedia.

More so than histories, we need well-told stories of heroes. Cesar Chavez’s stock hero treatment is too bland to be inspirational. The character is portrayed in too saintly a fashion, much like the Jesus in “Son of God.”

There’s real footage from that time period blended in, in muted grays. The cinematography matches this footage with muted colors, to give an overall age-effect.

While visual grays and muted colors can be a good thing, the entire film wants much more contrast and depth dramatically.

Normal lives are in the gray scale. Heroes shine a brilliant light. The nature of paradox is that the brilliance contains its opposite. We needed to see the extent of his outer hardship, and meet his inner demons, to appreciate what Chavez overcame.