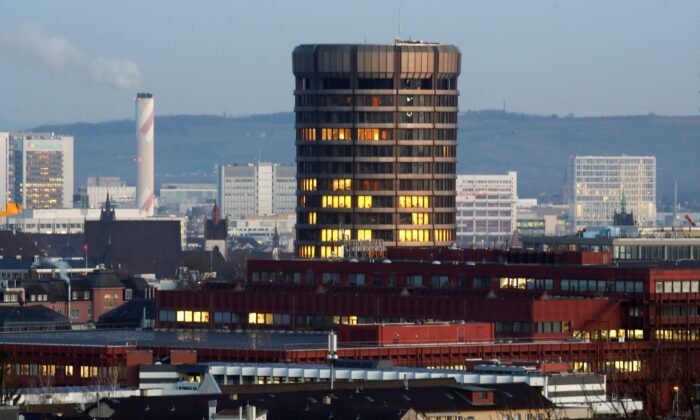 The tower of the headquarters of the Bank for International Settlements (BIS) is seen in Basel, Switzerland on Jan. 30, 2020. (Arnd Wiegmann/Reuters)
Business & Economy

LONDON—The central bank to the world’s central banks, the Bank for International Settlements, has warned of the growing risk of a price bubble in environmental-focused asset markets.

Some estimates indicate Environmental, Social, and Governance (ESG)-focused assets have soared to a value of $35 trillion and now account for more than a third of all assets professionally managed by banks and investment funds.

A narrower definition including only exchange-traded funds (ETFs) and mutual funds with ESG or socially responsible investment (SRI) mandates points to even faster, tenfold growth, to approximately $2 trillion. This is evidenced in assets such as clean energy and electric car stocks and green bonds, which have soared in recent years.

“There are signs that ESG assets’ valuations may be stretched,” the BIS, which holds regular meetings for the world’s central banks, said as part of its latest quarterly report.

Claudio Borio, head of its monetary and economic department, referred to it as the “green bubble” risk, highlighting how the surge in ETFs and mutual funds was comparable to parts of the mortgage backed security market in the runup to the global financial crisis.

“You could have too much, too quickly of a good thing,” Borio said. “We know valuations are rather rich”.

Prices have eased somewhat this year but markets are awash with examples of the moves. Electric car doyen Tesla for example raced up 750 percent in last year’s frenzy and is up 16,000 percent over the last decade.

Borio said authorities needed to be aware of the risk such huge shifts in investor demand can have, also drawing comparisons to the internet stock boom of the early 2000s and the railroad boom in the 1800s.

For the moment, regulators’ concerns should be eased by the fact that most of the exposure is to equity markets which tend to have less of systemic relevance.

Current holdings of ESG linked bonds are only estimated to account for about 1 percent of total bond portfolios for both U.S. insurance companies and European banks.

Borio did also warn of “definitional risk” and of so-called “greenwashing”, where the environmental benefits of certain assets were potentially being over-exaggerated. If those exaggerations are exposed, values could then plunge.

The BIS’s report also focused on the current surge in global inflation, which is being fuelled by rising energy and labour costs as the world’s economies reopen after COVID-19 enforced shut downs.

Borio said the BIS’s view remained that the rise in inflation would be temporary although he acknowledged it wasn’t as clear cut as initially expected.

“It may indeed be possible as we see in terms of supply side constraints and some of the pressures, could be somewhat longer lasting than we had originally anticipated, but the view has not fundamentally changed,” Borio said.