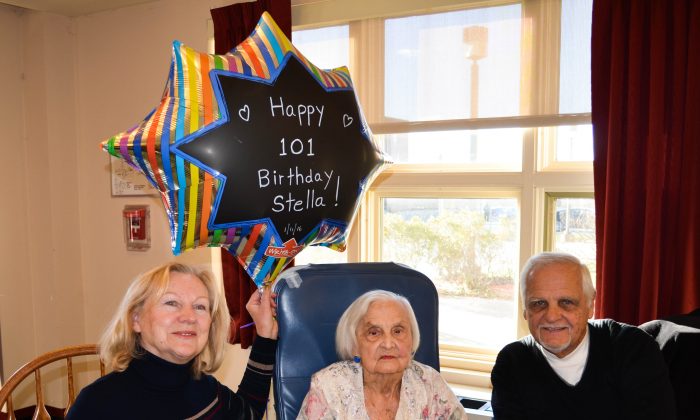 Stella’s son William Iwascow and his wife Kyrstyna sat with Stella during the birthday celebration. Stella’s son William says Stella lived to this great age “with love.” He called her “the epitome of motherhood and family. She brought us up and taught us many lessons. She follows them herself.”

He said Stella worked at a senior center and nursing home helping others after she retired and appreciates the help she gets now at Valley View. “They are so knowledgeable, kind, sensitive. My mother is very happy.” Sella echoed her son’s sentiments. “I’m very happy here.”

Stella was born and raised in New York City and worked in the commissary at a Howard Johnson’s for 30 years, working her way up to manager before she retired. She later moved to Pompton Lakes, N.J., and finally to Warwick where she lived for 15 years. Stella takes great pride in her seven grandchildren and 10 great grandchildren. She loved to dance, can speak several languages including Russian and Ukrainian, and is very dedicated to her family. One of Stella’s favorite sayings is “Never Let Yesterday Fill Up Today.”

Lucille was born in Puerto Rico and moved to New York City when she was 19. She speaks Spanish and some English and worked for many years at the Roosevelt Hotel as a housekeeper and also was a seamstress. Lucille raised two children in the Bronx and retired in Montgomery.