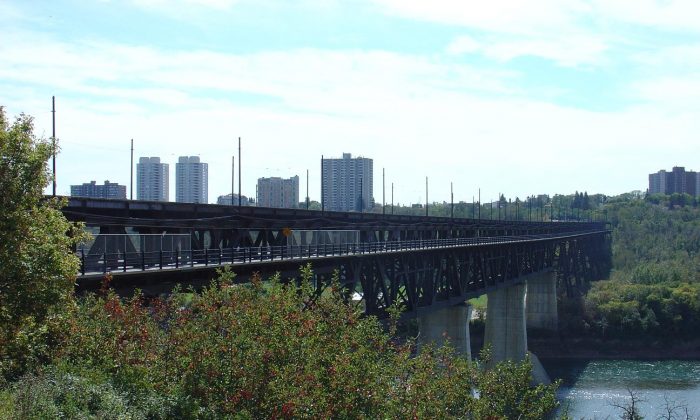 EDMONTON—A drive to help illuminate Edmonton’s High Level Bridge, which first opened in June 1913, kicked off with a woman the same age as the bridge making a fitting donation to the cause.

One hundred-year-old Jessie Voaklander donated $2,500 to the Light the Bridge campaign, funding 100 bulbs to help outfit the bridge.

Voaklander says she and her family were in a Model T Ford when she crossed the bridge for the first time.

Dave Mowat is behind the project to outfit the bridge with 60,000 LED lights.

Each light will be individually programmed and Mowat compared the bridge when lighted to a piano, which can be played differently depending on the occasion.

“Every single one of those lights becomes programmable, so whether it’s the northern lights working their way across the bridge in blues and greens or it’s choreographed to an outdoor symphony or whether it’s a simulcast on a radio station—the sky is the limit,” he said.

Officials say lighting the High Level will cost about $3 million.

Earlier this month, councillors officially gave the green light to the Light the Bridge project, but not money—it will be funded through private and corporate dollars.

“We as Edmontonians have the opportunity to raise the curb appeal of our own city,” Mowat said.

Engineers say it will take about 32 weeks to install all 60,000 lights on the bridge and hope the job will be completed by next spring.

Once the lights are installed, it is expected to cost $17,000 annually to operate.