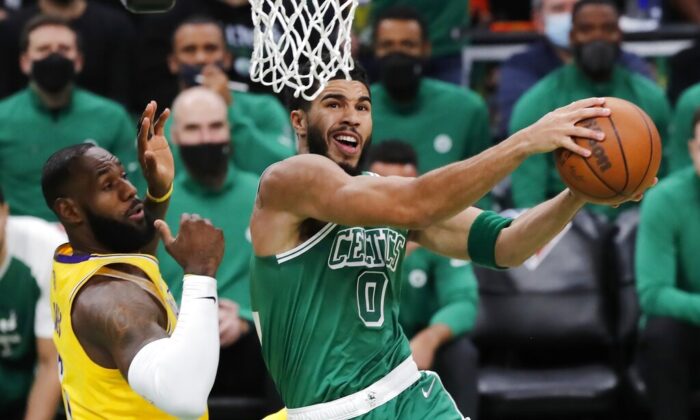 Boston Celtics' Jayson Tatum (0) goes up to shoot against Los Angeles Lakers' LeBron James, left, during the first half of an NBA basketball game, in Boston, on Nov. 19, 2021. (Michael Dwyer/AP Photo)
NBA

Celtics Dominate Lakers in the Second Half as LeBron Returns

The classic rivalry between the top two NBA franchises, both with 17 championships, resumed on Friday night at Boston’s TD Garden; it resulted in the Boston Celtics’ victory over the L.A. Lakers, 130–108.

The game featured the return of LeBron James, four-time league MVP, who missed the past eight games with an abdominal strain.

Adding to the energy of the stadium, in attendance were two Celtics Hall of Famers, Bill Russell and Paul Pierce.

Russell was introduced as a “true Celtics legend” by the PA announcer when shown on the Jumbotron.

Celtics Jayson Tatum grew up being a Lakers fan and idolized Kobe Bryant.

“It’s a surreal moment, obviously, Bill Russell and the impact he had on the Celtics and the NBA,” Tatum said, “having someone like Paul come to the game and someone I have a relationship with.”

Other top Celtics include Marcus Smart who scored 22 points, Dennis Schroder who had 21, and Al Horford who contributed with 18 points.

For the Lakers, LeBron James returned in good form to score 23 points, on 10–16 shooting, six rebounds, and two assists, in 32 minutes.

However, Anthony Davis led the Lakers with 31 points, six rebounds, and two assists.

The Lakers came out with high intensity, making nine of their first 12 shots, and led 38–30 at the end of the first quarter.

The second half was completely different, as the Celtics got hot offensively and stepped up the defensive pressure; they went on a 14–4 run, to lead 93–82 at the end of the third quarter.

“Just a dark corner of the game,” said Lakers Davis. “We just got to find a way to score in the third quarter. “That’s been our kryptonite the whole season.”

Another issue for the Lakers is rebounding, as Boston had an enormous advantage of 51–33.

The Lakers were unable to muster a comeback and faded to end the game, as “Beat L.A.” chants roared throughout the Garden, improving Boston’s record to 8–8.

The Lakers have lost their last four road games and post a season record of 8–9.

“It’s never [too late], we got 65 games left,” James said. “We need to play better, no matter who is in the lineup. We have our system and we need to obviously fast-track it and get better with it so we can play … at a high level,” James added. “There’s no level of panic, but there should be some sense of urgency any time we take the floor.”

Next up for the Lakers is an away game at Detroit on Sunday, while the Celtics host Oklahoma City Saturday evening.