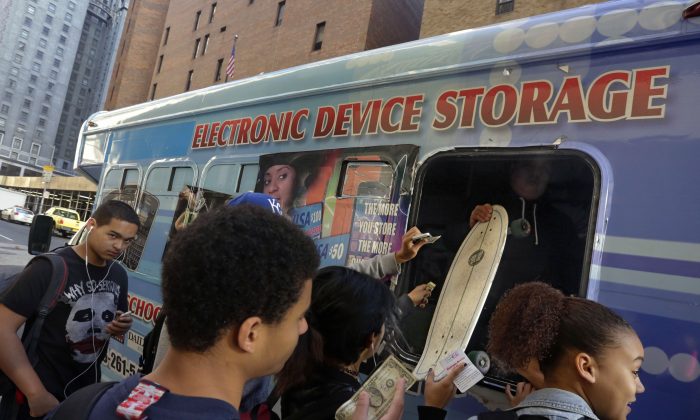 Students from the adjacent Norman Thomas High School building, pay a dollar to check their electronic devices, at a van in New York City on Thursday, Oct. 9, 2014. The decades-long ban on cell phones is to be lifted in NYC schools in two months. (AP Photo/Richard Drew)
New York

The decades-long ban on cellphones is to be lifted in New York City schools in two months, Mayor Bill de Blasio announced Wednesday. Though alleviating inequity between schools that have and those that have not strictly enforced the ban, the planned change raises concerns over discipline and safety.

The new policy in the city will be that students can have the phones, and other gadgets, but must keep them hidden or stored in a designated location.

“I know that families and children feel safer when our students have access to cellphones.”
— Carmen Fariña, schools chancellor

Schools can allow students to use cellphones during lunch breaks and in designated areas. They may also be used in instruction. School principals will have to discuss individual policies with parents and teachers.

“I know that families and children feel safer when our students have access to cellphones,” Schools Chancellor Carmen Fariña stated in a press release.

“[I]t’s simply not fair that members of school communities without metal detectors are more likely to have that sense of comfort than other families and students.”

But “what makes people feel safer may not actually help them be safer,” states Kenneth Trump, school safety expert, on his website.

During the 2001 Santana High School shooting in California, for example, children calling and texting their parents overloaded the cell network preventing law enforcement from using it to coordinate.

Also, parents flocking to the area in response to calls may complicate evacuation and delay first respondents, Trump warned.

And the information the children are sending out may be problematic as well.

“They’re very often well intended, but they’re spreading rumors and misinformation and they’re distracted from paying attention to the directions of adults that could save their lives,” said Trump, president of the National School Safety and Security Services, a Cleveland-based school security consulting firm.

Cellphones bring to schools a number of potential troubles. In addition to security concerns, students have been reported to use them to cheat, cyberbully, organize gangs and drug deals, take inappropriate photos and videos, send bomb threats, and distract themselves during classes.

The city school ban on communication and entertainment electronics has been in effect since the late 1980s exactly for such reasons.

Mayor Bloomberg and his Schools Chancellor Joel Klein strengthened the enforcement in 2006, when they started to send portable metal detectors to schools to keep out weapons. It led to the confiscation of hundreds of cell phones.

The move sparked protests and lawsuits by parents, but to no avail. In 2007, the New York Supreme Court dismissed a lawsuit against the ban saying the policy is not unconstitutional, nor unreasonable. Judge Lewis Bart Stone noted a ban on use of cell phones, as opposed to a ban on their possession, may be even harder to enforce.

“[T]his court has regularly observed that a ban on use does not always assure that cellphones do not ring in the courtroom at inappropriate times and cause disturbances,” Stone stated. “However, when they do, the court, unlike a teacher in a classroom, has the benefit of armed court officers to enforce the use ban and to assure the restoration of order.”

Trump had long been an advocate for banning cell phone possession in schools too. But he started to change his mind with the spread of digital learning.

“Having technology in schools as instructional tools, and believing one can simultaneously eliminate the ability of students to communicate electronically with each other and the outside community, appears to be increasingly unrealistic thinking,” he states on his website.

Indeed, even schools with permanent metal detectors had a hard time enforcing the ban. Students were smuggling in phones under their clothes, in pieces, or even stuck into sandwiches.

Others had to settle for storing their phones for a buck a day in bodegas and trailers nearby offering the service. As metal detectors are often in schools in low-income neighborhoods, such a practice put a financial burden where least needed.

“We have to accept the bigger reality of today,” Trump said in a phone interview. “The horse is out of the barn.”

Trump now recommends allowing phones with clear policies regulating their use as well as explaining to students, parents, and school staff the risks of cell phone use during a crisis.

“Enforcing that is going to … really take some fortitude by the school administrators,” Trump said with a sympathetic laugh.

Also on a positive note, one high school administrator told Trump that allowing digital communication led to an increase in security tips from students, as they were more comfortable voicing their concerns electronically.

The city’s lifting the ban still has to be approved by the Panel for Educational Policy in February. The panel is expected to support the move, since a majority of its members are appointed by the mayor, even though de Blasio has promised to give the panel more independence, and some members have expressed a willingness to voice dissent. If approved, it would come into effect on March 3.