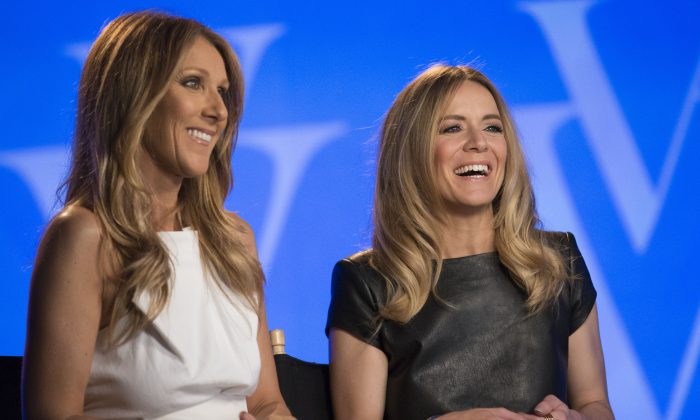 Celine Dion, left, and Veronic DiCaire speak during an interview at the Jubilee Theatre on Friday, June 28, 2013 in Las Vegas. (Photo by Andrew Estey/Invision/AP)
Social Media

A Celine Dion death hoax has been perpetuated via fake news apps on Facebook that prompt users to share the false news. The news claims Dion died in a plane or car crash.

News bits that appear to be from Fox News, CNN, or another reputable news source claim that the singer died in a freak accident–by car or by plane. But such hoaxes have been around for years and the singer is still alive.

It appears that app-makers have seized upon the sensationalism of the false stories and created apps around them. In recent weeks, these apps have proliferated.

One of them claims to have a video of the purported crash, but none exists. It then requests permission from a user to keep spreading the link around.

“(Hollywood Breaking News) – R.I.P Celine Dion At about 11 a.m. ET on Sunday (October 20, 2013), Celine Dion died in a plane crash. The culprit for the story is Global Associated, aka Mediafetcher. ‘Celine Dion presumed dead in private plane crash,’” an excerpt from one of the fake articles reads, according to About.com.

The news pieces appears to be citing the official-sounding Global Associated News website, which is responsible for a number of fake news pieces, including the hoaxed deaths of Eddie Murphy and other celebrities.

There’s another false news piece that claims she was in a car crash.

No mainstream media organizations have reported on her death. On Sunday, Dion released a new song with artist Ne-Yo.

On Twitter, a number of users were confused about whether Dion was dead or alive.

“Is Celine Dion really dead or is it just a hoax??” one post reads.

Rich Hoover, the head of the Global Associated News, told the New York Times years ago that his fake news pieces generate revenue for him.

“They get a thrill from it. There is a little hit of dopamine when you lie, especially a lie that is believed by somebody else,” he told the paper.