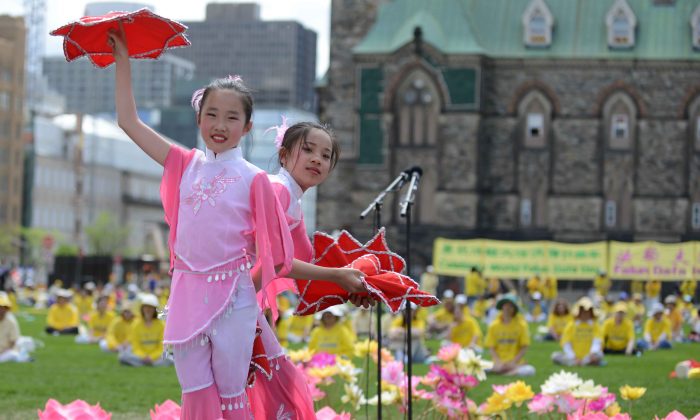 The meditation practice officially marks May 13 as a day to celebrate its central tenets of truthfulness, compassion, and tolerance. MPs from every federal party turned out to encourage Falun Dafa practitioners in the face of a systemic crackdown of the practice in China that began in 1999 and continues today.

Conservative MP Scott Reid noted that MPs across all parties want to see an end to widespread human rights abuses in China and the persecution of Falun Gong, as the practice is also known.

Reid said he was astonished the Chinese regime was still persecuting Falun Gong after 13 years.

“This is a social benefit. This is not a security threat, this is not a political movement—this is a spiritual movement. This has not sunk in to the people who run the communist party,” said Reid.

“It is, without a doubt, a massive blot on their record.”

Reid said he was also struck by the unending courage of Falun Gong practitioners who assert their belief in the face of “terrible persecution” in China, a persecution that includes murder, noted Reid.

Reid said the regime’s leaders should have learned after 13 years that Falun Gong practitioners cannot be forced to abandon their beliefs through violent suppression.

Liberal MP Judy Sgro, who raised the issue of illegal, forced organ harvesting from imprisoned Falun Gong practitioners in the House of Commons, said despite continued persecution, progress is happening.

“You have heard from the political leaders in Ottawa that our hearts are all with you and with all of those in China who continue to fight for freedom, for liberty, the right to be able to practice in a peaceful way,” she said.

Sgro praised Falun Gong adherents for holding to their values. “Around the world you promote peace, not hatred, but love.”

It was the job of MPs to ensure that the cause of Falun Gong was heard loudly in Canada and that there was immediate end to organ harvesting in China, said Sgro.

Green Party Leader Elizabeth May called on the Chinese regime to end the crackdown, and called on MPs to speak up for human rights.

She noted that trade ties with China made it difficult sometimes for the country to stand up.

May said Canada must be careful given its pursuit of trade with China and efforts to sign an investment deal with the Chinese regime.

It was inhuman to treat Falun Gong adherents as “lesser creatures” said May, noting they are subject to incarceration and organ harvesting in China.

“Human rights, if not respected in one country, is an assault on human rights in every country,” she said.

Conservative MP Stephen Woodworth noted that the government was establishing an Office of Religious Freedom and said he hoped and expected it would carry the cause of Falun Dafa in China.

He praised the group for withstanding over a decade of persecution.

Conservative Brent Rathgeber heads the Parliamentary Friends of Falun Gong, which includes MPs from all parties.

He said more and more Canadians are coming to understand the plight and “human rights atrocities” being committed against Falun Gong adherents in China.

He said he expected to see the day when religious freedom came to China.