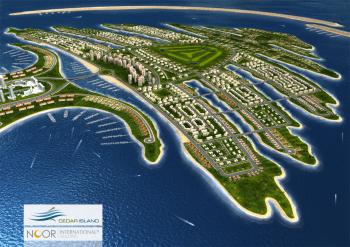 A projected view of what Cedar Island, the controversial development project off the coast of Lebanon, will look like. (Courtesy of Noor International Holdings)
Middle East

Off the Coast of Lebanon, Cedar Island Draws Controversy

By Charlie Ghanem
biggersmaller
Print
BEIRUT, Lebanon—A massive team of architects, engineers, and environmental consultants are sweating over the technical plans for a 3,311 square kilometer island off the coast of Lebanon. Headed up by Dr. Muhammad Saleh, a civil engineer and chairman of the real estate development company pushing the venture, they are now making their case to the Lebanese people and government for the proposed resort in the Mediterranean Sea.

Saleh’s company, Noor International Holdings, is behind the venture. It is proposed that the island will hold residential, commercial, recreational, and tourist facilities, as well as being equipped for permanent inhabitants. The Minister of Tourism has encouraged the US$ 8 billion idea, but the project is still pending permits from some quarters of the Lebanese bureaucracy.

Despite the country’s fragile political situation and the global financial crisis, Noor is certain that the project will be a major success. Investment from around the world, and hundreds of inquiries about the project from government and businesses, were significant signs, Noor believes, that people have faith in the country.

A New York Times commentary on Jan. 11 also describes Beirut as “poised to reclaim its title as the Paris of the Middle East” in 2009.

Dr. Saleh believes Lebanon is safe amidst the financial crisis, having been fairly well protected by the relative isolation of its financial sector from the international system.

A tourist project of this nature will not only attract travelers from around the world, helping Lebanon to boost economic revenues, but also provide around 50,000 job opportunities for citizens, Saleh says. Many Lebanese working and living abroad will therefore also be encouraged to return to their home country.

The biggest questions raised for Noor, however, come from environmentalists. While the Divers Union, fishermen and Green Peace are all against the project, Noor gives assurances that marine life, already endangered in Lebanon, will develop after the island is built.

The company says it is looking into the environmental issues, and that it is committed to reclamation laws when it comes to deciding on the project’s location: “In the long run, the island will become a new habitat for aquatic life, and a hot diving site for diving enthusiasts,” Saleh told The Epoch Times.

An example of the mind-boggling problems architects of the project face is where to get the sand from. Saleh doesn’t talk specifics on this point, but makes clear that the source with the least environmental impact will be used. Further, he says that Noor is considering a number ways of mitigating the impact of digging up massive amounts of sand and dumping it into the sea, like using large floating structures in part instead, and semi-submersible floating structures.

People like Habib Maalouf, a journalist specialized in environmental issues, on the other hand, say that wherever they get the sand from, it’s going to create problems. Maalouf says it will either have to come from other areas of the sea itself, or somewhere inland, leading to new quarries somewhere in the Lebanese mountains. Both locations, when damaged, can’t be restored.

Apart from the sand issue, the simple existence of the island itself may be problematic. The “water brakes” (a technology that will protect the island from the waves of the Mediterranean) will also cause disruption to seawater currents, and not only around the island, but up to tens of kilometers away. This is expected to be harmful to marine life, and damage wrought in this area is also hard to recover from.

The Lebanese blogosphere is full of complaints about the claimed cultural damages the project is going to cause. Bloggers against the project are mainly concerned that other archeological sites and old towns that Lebanon is known for will be neglected in favor of a flashy new island. They argue that the island will shift travelers’ sight away from the true identity of the country, instead putting the spotlight on a Westernized Cedar Island that has nothing to do with Lebanese tradition.

An interesting quote of Facebook user John O'Sullivan argues that Lebanon should be inspired by the luxury hotspots of the Mediterranean, such as Monte Carlo, St Tropez, and Cannes, instead of importing ideas from the Arab Gulf, which differs greatly from the Lebanese culture, history and environment.

Carlo Massoud, an architect from Beirut, wrote: “Stop imagining yourself on a white sand beach with palms. We will never be a tropical country … we have our [own] identity.”

While hundreds of curious inquiries fill up Noor’s inbox, and while the usual suspects protest against the environmental issues, others still are looking closely at the Lebanese political situation, and wonder whether a project like Cedar Island has any chance to be implemented in the short term anyway, given the number of other issues that have priority.

Whether Noor will achieve its goal and change Lebanon’s image, or whether the project won’t go any further than blogs, remains to be seen. While Saleh and his team wait impatiently for the slow-moving wheels of Lebanese bureaucracy, the project remains a hot topic of controversy among the people.