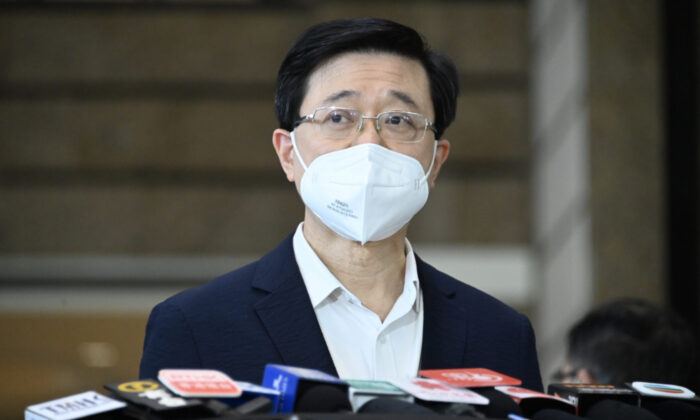 The new Chief Executive of Hong Kong, John Lee Ka-chiu, attended his first meeting with the Legislative Council (LegCo) as leader on July 6, 2022.

The Chief Executive’s Office wrote to the LegCo, suggesting members focus on only seven areas of public concern.

His suggestions raised questions about LegCo’s ability to supervise the government.

In an interview with The Epoch Times, Scholar Chung Kim-wah said that “Lee’s approach is ‘ugly.'”

Chung also speculated that Lee was trying to take an easy road to dodge difficult questions and avoid embarrassing himself.

He also suspected that Lee would use the Q&A to please the Chinese Communist Party (CCP).

The Administration Wing wrote to LegCo on July 4, 2022, to propose focusing on only seven public concerns in the Q&A.

Tik Chi-yuen, a self-claimed “non-pro-government” member, criticized Lee’s approach. Tik said it was unacceptable and unsatisfactory; Tik believed such limitation would hurt the chief executive’s image, while the public might see it as a lack of confidence. Rules on questions also would interfere with members’ freedom to speak.

At noon on July 5, 2022, LegCo Chairman Leung Kwan-yin defended Chief Executive John Lee Ka-chiu when he met with reporters. Leung stated, “It has been standard practice that the LegCo Chief Secretary consults with the CE’s office on what to discuss in advance.”

Leung mentioned that while the former CEO did not specify any restrictions, he did not consider Lee’s request an “administrative bully.” On the contrary, it showed mutual respect.

‘Lee Does Not Want to Make a Fool of Himself’

Chung Kim-wah, a former assistant professor of applied social sciences at the Polytechnic University, said the Q&A approach is “ugly.” He suspected that the office would have given LegCo members a heads up, so they would know what to do.

Chung explained, “Based on Lee’s poor performance and incompetency on elaborating the Anti-extradition Law in 2019, and during the CE election campaign, I guess Lee prefers no surprises so that he can prepare better.” If the members ask anything more challenging, Lee worries he might be embarrassed.”

Professor Chung‘s analysis also suggested Lee’s attempt to use this as an opportunity to butter up the CCP and Xi Jinping.

A member of the DAB party once left his “cheat sheet” on his seat, which the democratic party members later discovered.

Lam also thought the incident reflected John Lee’s delusion: Being chief executive means having the highest power, and neither Lee nor his office would require LegCo’s independent supervision.