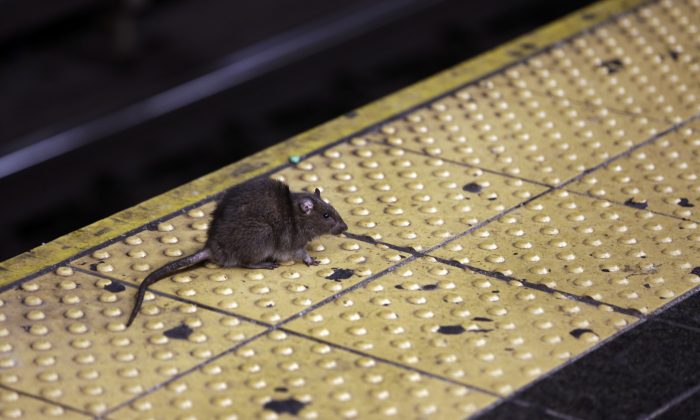 CDC Warns of ‘Unusual or Aggressive Rodent Behavior’ Amid Pandemic

The Centers for Disease Control and Prevention (CDC) has warned that rodents such as mice and rats are becoming more aggressive as they scavenge for food after restaurants have been closed across the United States.

The agency said in a website update that rodents rely on food and waste generated by restaurants, and pandemic-related closures have prompted the animals to find new sources of food.

“Some jurisdictions have reported an increase in rodent activity as rodents search for new sources of food. Environmental health and rodent control programs may see an increase in service requests related to rodents and reports of unusual or aggressive rodent behavior,” the CDC wrote.

The health agency said that business owners and restaurants can prevent attracting mice and rats by sealing up their homes or buildings, removing heavy vegetation or debris, removing pet food, and keeping garbage in well-secured bins.

“Rodent bait stations may become a more attractive food source for rodents, so stations may need to be serviced more often,” the CDC said. “It is important to monitor rodent activity during this time and develop indicators to help inform rodent control strategies.”

Those businesses should also follow proper protocols to clean up after rodent infestations so as to prevent diseases from emerging.

“As they look for food, people are noticing them more,” Robert Villamil, owner of Chicago-based Crow Pest Control Inc., said in a Chicago Tribune report. “Rats carry disease and they’re very unsightly, so it’s a big thing. People are wanting to take steps to keep rats away from their homes.”

According to some reports, rats have resorted to infanticide or even cannibalism in New York City, which has seen a huge number of restaurants and eating establishments close during the pandemic.

“They’re mammals just like you and I, and so when you’re really, really hungry, you’re not going to act the same. You’re going to act very bad, usually,” Bobby Corrigan, an urban rodentologist, told NBC News. “So these rats are fighting with one another, now the adults are killing the young in the nest and cannibalizing the pups.”

“I turn the corner, there’s about 30 rats at the corner, feasting on something in the middle of the street,” Charles Marsala of New Orleans Insider Tours and AWE News told CBS News.

According to the CDC, rats and mice directly or indirectly carry more than 35 different diseases.