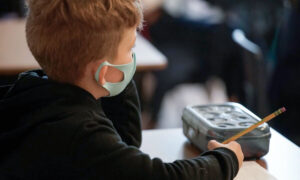 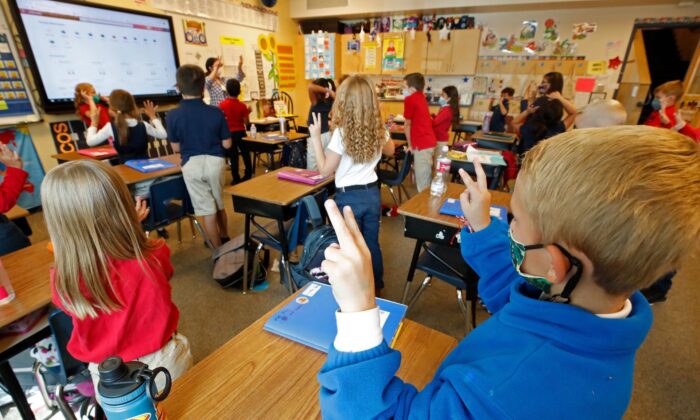 Students wear masks as a teacher instructs them at Freedom Preparatory Academy in Provo, Utah, on Sept. 10, 2020. (George Frey/AFP via Getty Images)
US News

The Centers for Disease Control and Prevention (CDC) issued tighter mask guidance after a prominent teachers union pressured the agency to include more rigorous mask recommendations in school buildings, according to newly obtained emails by watchdog group Americans for Public Trust.

The emails, obtained through a Freedom of Information Act request by the watchdog and published by Fox News, show a string of communications between the National Education Association (NEA) and White House staffers.

The NEA is the largest teachers union in the United States and advocates for education professionals including public school teachers, support personnel, and faculty members at colleges and universities.

The email correspondence includes a draft statement from the NEA to the White House in which the teachers union criticizes the CDC over its masking guidance after it announced on May 13 that vaccinated people could stop wearing masks indoors and outside.

“We appreciate the developing nature of the science and its implications for guidance, but releasing the guidance without accompanying school-related updates creates confusion and fuels the internal politicization of this basic health and safety issue,” the draft statement reads.

“CDC has consistently said, and studies support, that mitigation measures, including to protect the most vulnerable, remain necessary in schools and institutions of higher education—particularly because no elementary or middle school students, and few high school students, have been vaccinated.

“This will also make it hard for school boards and leaders of institutions of higher education to do the right thing by maintaining mitigation measures. … We need CDC clarification right away.”

The union stated that it was prepared to issue the critical statement and called for the CDC to issue new guidance providing greater clarity over masks in schools and release more rigorous mask recommendations.

One day after the CDC’s guidance went live, Erika Dinkel-Smith, the White House director of labor engagement, said she stopped the NEA from releasing its critical statement.

Following discussion and coordination with the White House, the NEA eventually released a much more relaxed statement, which reads, “CDC’s current recommendation that schools continue to implement existing school-related guidance, including the mandatory and correct use of wearing masks and continuing of social distancing, is an important and welcome clarification about the protections that need to be in place in our schools.”

On May 15, the CDC also released updated masking guidelines, noting that schools should maintain both masking and physical distancing, as well as other mitigation measures, through the end of this school year, regardless of vaccination status.

The latest string of emails comes just months after the New York Post alleged that the CDC altered its guidance on when and how schools should reopen after being influenced by the American Federation of Teachers (AFT), the nation’s second-largest teachers union and one of the top donors to the Democratic Party.

AFT President Randi Weingarten later said the CDC had asked her organization to recommend “language” to be used in school opening guidelines.

“The CDC in February and March basically asked all sorts of different organizations to sit down with them and give them comments about what they thought was important,” Weingarten said in an interview with C-SPAN’s Washington Journal. “They talked to parent organizations, they talked to the two [teachers] unions.

“This is normal rule-making,” she said. “Frankly, this is the way every administration used to do, the problem with the last administration is that they didn’t do it.”

The Epoch Times has contacted The White House and the National Education Association for comment.