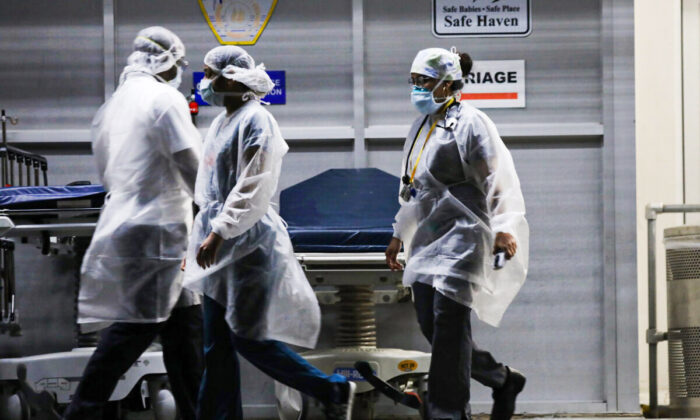 Medical workers walk outside a special coronavirus area at Maimonides Medical Center in the Borough Park neighborhood of the Brooklyn borough of New York on May 26, 2020. (Spencer Platt/Getty Images)
AMERICA

The Centers for Disease Control and Prevention (CDC) has estimated that there have been more than 1 million excess deaths in the United States linked to the COVID-19 pandemic since February 2020.

According to CDC data, which are updated on a weekly basis, the number of excess deaths in the country was 1,045,389 as of Feb. 17.

Excess death is a term used in epidemiology and public health. It refers to the number of people who die from any cause during a specific period of time, and it’s compared with a historical baseline from recent years.

Estimates of excess deaths “can provide information about the burden of mortality potentially related to the COVID-19 pandemic, including deaths that are directly or indirectly attributed to COVID-19,” according to the CDC.

The CDC noted that the excess deaths “were calculated using Farrington surveillance algorithms.”

For instance, CDC data show that an extra 63,001 people have died since February 2020 of hypertensive diseases and that more than 67,400 people have died because of Alzheimer’s or dementia-related illnesses.

“We’ve never seen anything like it,” Robert Anderson, chief of the CDC’s mortality statistics branch, told The Washington Post.

An analysis of death certificate data from the CDC by The Epoch Times also shows that deaths among individuals aged 18 to 49 increased by more than 40 percent in the 12 months ending in October 2021 compared to the same 12-month period in 2018 to 2019.

The majority of the deaths weren’t linked to COVID-19.

While the increase in deaths could be seen across the country, some states experienced a higher rise in deaths than others, with the South, Midwest, and the West Coast seeing steeper hikes among young to middle-aged individuals.

Northeastern states generally saw much milder increases, with New Hampshire seeing no mortality increase and no COVID-19 deaths in those aged 18 to 49.

Public health authorities in several states confirmed to The Epoch Times that they’re examining the issue of surging mortality rates among the age group.

“We did not handle it well. That’s glaringly obvious,” Stephen Woolf, director emeritus of the Center on Society and Health at Virginia Commonwealth University, told The Washington Post. “The other countries got hit by the same virus, but no country has experienced the number of deaths we have, and even if you adjust for population, we are among the highest in the world.”