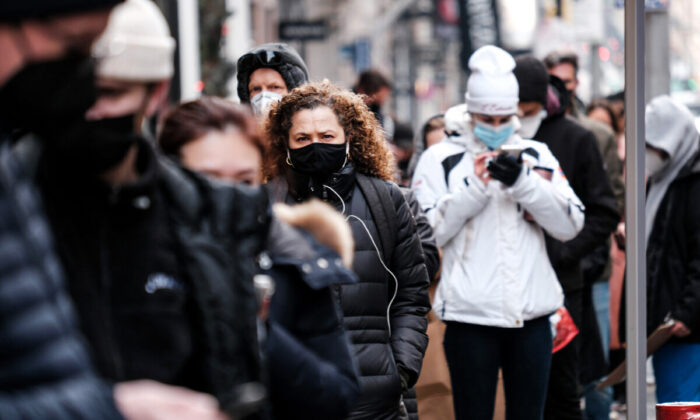 People wait in long lines in Manhattan to get tested for COVID-19 in New York on Dec. 22, 2021. (Spencer Platt/Getty Images)
By Isabel van Brugen

The Omicron coronavirus variant is estimated to have taken over the virus’s Delta variant as the most prevalent strain contributing to new COVID-19 infections, accounting for 58.6 percent of all strains actively circulating in the United States as of Dec. 25, according to the Centers for Disease Control and Prevention (CDC), which has drastically revised an earlier projection of new Omicron variant infections.

CDC officials significantly reduced estimates for the week ending on Dec. 18 that had erroneously indicated a nearly six-fold increase in the Omicron variant’s share of infections in only one week. The figures showed that the newly detected variant accounted for roughly 73 percent of new infections nationwide.

Federal officials cited those figures to announce that the Omicron variant had become the dominant source of new infections in the United States.

The agency has now revised down the Omicron variant’s proportion of cases for the week ending on Dec. 18 to 22.5 percent from 73.2 percent, citing additional data and the rapid spread of the variant that in part caused the discrepancy.

The Biden administration didn’t respond to a request for comment by press time.

The Delta variant, which had been the dominant strain in the past few months, accounts for 41.1 percent of all U.S. COVID-19 cases as of Dec. 25, the public health agency’s data projections show.

“Setting aside the question of how the initial estimate was so inaccurate, if CDC’s new estimate of Omicron prevalence is precise, then it suggests that a good portion of the current hospitalizations we’re seeing from COVID may still be driven by Delta infections,” former Food and Drug Administration Commissioner Scott Gottlieb said on Dec. 28.

The CDC stated that the data include modeled projections that may differ from weighted estimates generated at later dates.

The Omicron variant was first detected by doctors in South Africa less than a month ago, and on Nov. 26, the World Health Organization designated it as a “variant of concern.” The variant has since been reported in about 90 countries.

CDC officials have said they don’t yet have estimates of how many hospitalizations or deaths are due to the Omicron variant.

Recent studies have shown that the Omicron variant presents milder symptoms and fewer hospitalizations than earlier strains. Some officials, including White House COVID-19 adviser Dr. Anthony Fauci, have said that because of the variant’s high degree of transmissibility, it may lead to more hospitalizations in the coming days.