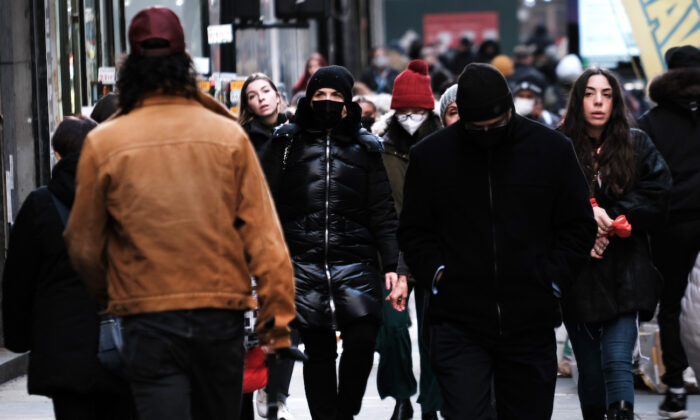 Omicron Becomes Dominant Source of New Infections in US: CDC

The Omicron variant of the novel coronavirus is now the dominant source of new infections in the United States, accounting for roughly 73 percent of new infections nationwide, according to data from the Centers for Disease Control and Prevention (CDC).

Federal officials on Monday cited CDC figures for the week ending Dec. 18 that showed a nearly six-fold increase in Omicron’s share of infections in only one week.

The variant was first detected by doctors in Africa first less than a month ago, and on Nov. 26, the World Health Organization designated it as a “variant of concern.” The variant has since been reported in around 90 countries.

“These numbers are stark, but they’re not surprising,” she said.

Much about the Omicron variant remains unknown, including whether it causes more or less severe illness.

Meanwhile, New York City’s health director said that while Omicron cases are rising quickly, hospitalizations are not at this time.

South African ministry of health officials last week said that their rates of hospitalization due to Omicron are about one-tenth of the hospitalization rate for the Delta wave earlier this year.

The Biden administration, meanwhile, has shifted its messaging in recent days to warning the unvaccinated that the White House believes they will experience a winter of “severe illness and death.”

“If you’re vaccinated, and you have your booster shot, you’re protected from severe illness and death,” President Joe Biden said during a press briefing on Dec. 16.

“We are intent on not letting Omicron disrupt work and school for the vaccinated. You’ve done the right thing, and we will get through this,” Zients said. “For the unvaccinated, you’re looking at a winter of severe illness and death for yourselves, your families and the hospitals you may soon overwhelm.”

CDC officials said they do not yet have estimates of how many hospitalizations or deaths are due to the Omicron variant of the CCP (Chinese Communist Party) virus, which causes the disease COVID-19.

Though there remain a lot of new infections caused by the Delta variant, “I anticipate that over time that Delta will be crowded out by Omicron,” Walensky said.