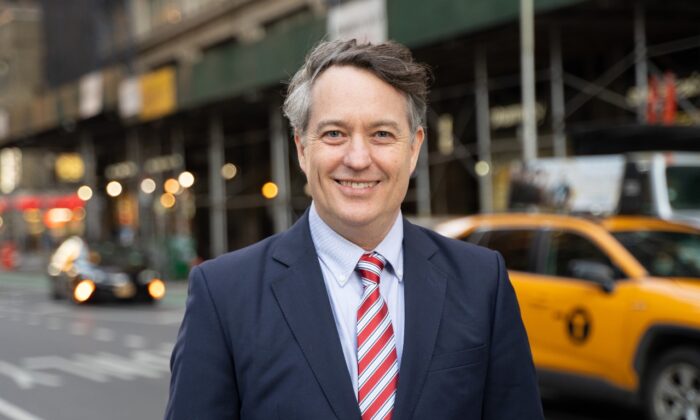 Anders Corr, publisher of the Journal of Political Risk and author of "The Concentration of Power," in New York on Dec. 13, 2021. (Bao Qiu/The Epoch Times)
US-China Relations

“Corporations [and] … governments are starting to fall in line with what the Chinese Communist Party wants them to do … in a way that really should concern us,” Corr, principal at advisory firm Corr Analytics and author of “The Concentration of Power,” told EpochTV’s “American Thought Leaders” program.

Corr, who also is a contributor to The Epoch Times, said the CCP coerces corporations to do its bidding in exchange for access to the Chinese market, which accounts for 20 percent of the world’s economy. Companies tend to comply with the CCP because they want to sell their products to China’s 1.4 billion people and get cheap labor from them, he said.

Such was the case with Apple, he said. The company reportedly made a secret deal with the CCP in 2016 to spend $275 billion in China over five years. The deal also included the forced transfer of technology. Corr said the deal was apparently coerced, as the CCP was making certain apps unavailable on Apple’s App store.

“If you prove to China that you are on the Chinese Communist Party’s side … [by] donating $275 billion in a secret agreement to tech transfers to China, if you prove that … maybe they give you a better deal … that maximizes your short-term revenues [and] increases your bonus as a CEO, but sells out shareholders down the road,” Corr said.

He argued that such actions are possible due to the CCP’s concentration of power, which allows it to “act as a gatekeeper” to the Chinese market. This kind of power is unavailable to the U.S. president because of economic freedom in the United States.

Many of the companies making deals with the CCP are willing to overlook ongoing human rights abuses perpetrated by the Chinese regime because of greed, according to Corr.

He mentioned that some businessmen, such as billionaire hedge fund manager Ray Dalio, justify their deals with the CCP by saying that they can’t get involved in rights and governance issues and that the United States also has its own problems. But Corr believes that this is an unacceptable statement.

“You can’t compare a triple genocide in China—of the Uyghurs, Tibetans, and Falun Gong—to what’s going on in the United States,” Corr said. “To compare the two is a total whitewash of China and a slander on the United States.”

The analyst said the CCP has the goal to achieve “global hegemony,” which is an accepted truth in academia. He said the CCP uses this economic power to expand its political influence in the United States.

“The influence that Beijing has over American politics through our corporations is actually quite similar to the influence that Beijing has in other countries,” Corr said. “Whether it’s Uganda or Philippines, they wield quite a bit of power through being able to turn on and turn off imports and exports between China and all other countries in the world.”

Western democracies aren’t doing enough to counter the CCP’s expansion and should coordinate a strategic approach to China, along with other Western countries “so that they make sure that our corporations are not selling out democracy when they’re doing business in China,” according to Corr.

“We should be resisting more. We should be seeing more evidence of resistance against the CCP, that we’re just not seeing,” he said. “The G-7 … they couldn’t agree even on a diplomatic boycott of the Olympic Games when there’s three genocides going on in China.”