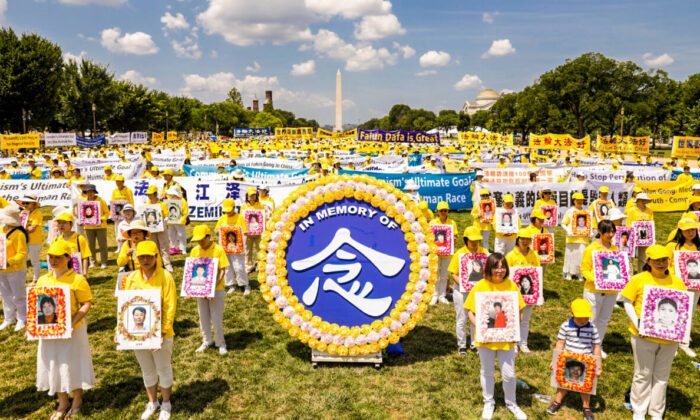 Falun Gong practitioners gather in Washington to mark the 22nd year of the start of the persecution by the Chinese regime on July 16, 2021. They hold the Chinese character 念 (Nian), which means to remember. (Samira Bouaou/The Epoch Times)
China Human Rights

After 22 years of harassment and torture at the hands of the Chinese regime for his spiritual beliefs, Dai Zhidong died aged 60 on Feb. 11, 35 days after the Chinese regime arrested him again for giving out a pamphlet, and less than one year after his wife, Guan Fengxia, died from severe persecution by the regime.

Dai had been working as a freight truck driver in the past months. On Jan. 8, he was filling his tank on the way to a delivery in Lindian county in China’s far northeastern Heilongjiang Province, and gave the pamphlet about his beliefs to the gas station attendant. Shortly after leaving the gas station, a group of police appeared out of nowhere and stopped his truck. They then detained him overnight without issuing any official document, and took away his keys to his home.

The next day, the police released Dai after getting him to pay 10,000 yuan ($1,570). When Dai arrived home, he was shocked to find his home raided; the police had emptied all his drawers and cabinets onto the floor, and eaten the half box of mandarins that he had bought before the last delivery. Mandarin peels were then left scattered all over the floor.

The police had also confiscated Dai’s only remaining savings that he stored at home in case—5,000 yuan ($786).

With no funds and worrying that the police might harass him again, as well as missing his wife badly, Dai collapsed with a rapid onset of severe sickness symptoms, unable to bear the decades of intimidation and torture. Not having insurance or money to visit a doctor, Dai died at home on Feb. 11.

Over the past two decades, Dai and his wife were tortured badly by China’s ruling Chinese Communist Party (CCP) just because they refused to denounce their belief in Falun Gong.

Also known as Falun Dafa, Falun Gong is an ancient Chinese spiritual practice consisting of qigong exercises and moral teachings that promote living life according to the principles of truthfulness, compassion, and tolerance. However, the CCP’s regime launched a systematic elimination campaign in July 1999 simply because the practice had attracted 70 million to 100 million adherents in China, which was more than its party members.

Dai and Guan used to have a happy family in Daqing, a city in Heilongjiang. Dai worked at the Training Center of the Submersible Pump Company in the Daqing Petroleum Administration. Guan was a conductor at Sartu Railway Station in Daqing. They enjoyed stable incomes from their jobs, as well as good health from their daily Falun Gong practices.

“Practicing Falun Gong not only freed me from the suffering of ailments, but also saved my soul,” Dai wrote in a sharing that was published on Minghui.org, a U.S.-based website that tracks the persecution of Falun Gong in China. “I now understand how to be a good person.”

He wrote that Guan started to practice Falun Gong in 1995, and he joined her one year later after witnessing how she had changed into a much better person.

Dai and Guan are survived by their 34-year-old son.

Dai suffered harassment, arrest, detention, displacement, torture, and financial extortion under the Chinese regime, which sought to force him to renounce his beliefs, according to Minghui.org.

In December 1999, Ma Zhifeng, the CCP official overseeing Dai’s employer, forced Dai to pay 3,000 yuan ($470)—a sum equal to several times of Dai’s monthly salary because Dai practiced Falun Gong. Ma claimed that the regime didn’t allow people to practice Falun Gong any more after the persecution of the practice started in July of that year, and didn’t allow the practitioners to petition. The money would be held by the regime as a guarantee to ensure that Dai wouldn’t go to Beijing to petition.

In April 2000, local police called on Dai to present himself at the police station to answer some questions. When Dai attended, he was detained for over 45 days simply because he didn’t renounce his Falun Gong faith.

On June 18, 2000, Dai agreed with Guan, who was also facing persecution for practicing Falun Gong, that a petition would be the only way for them to regain their freedom of thought and belief. So, they bought train tickets and traveled to Beijing together with their teenage son.

Already under government surveillance, the family never made it to Beijing. They were detained by railway police on the train and sent back to Daqing. Dai was detained for 75 days, fined 4,500 yuan ($710), and laid off without severance pay. Guan was detained for 45 days.

Even after his release, the police continued to harass Dai. In December 2000, they arrested him. Before the authorities were able to secure him in a detention facility, Dai found a chance to escape and fled. Dai traveled to Harbin hoping to avoid the police in Daqing who were searching for him, but he was eventually found. He was fined 2,300 yuan ($360) and sent back to Daqing for further detention.

Dai fled again until police found him on April 22, 2002. This time, the prison guard at Daqing Detention Center beat him badly and force fed him with chilli pepper water. To protest his torture, Dai started a hunger strike. As punishment, the prison guard then tore Dai’s esophagus using a nasal feeding tube. Dai told his family from detention months later that he frequently vomited blood.

One day in late June 2002, Dai’s family was told that Dai was being treated at a hospital. They quickly went to visit him, but saw that their loved one was in bad shape. They told Minghui.org that Dai was handcuffed to a chair, his lips and teeth were covered by layers of dried and fresh blood, his face was pale, nose was purple, eyes were closed, and he was unresponsive.

The family couldn’t take Dai back home because they didn’t have money to pay the police. They helplessly watched the police send Dai back to the detention center.

In September 2002, Dai was transferred to Daqing Prison where he suffered even worse torture for nearly seven years. According to Dai, the prison police continued to beat his badly damaged body. He lost consciousness several times throughout the years of torture. At one point, his ears were in pain for half a year when he lost most of his hearing. His legs were also injured to the point where he couldn’t walk for two weeks.

Other torture methods were also used cruelly on Dai. His prison guards frequently didn’t allow Dai to sleep. The longest no-sleep period during which they forced him to stay away was three days. They also forced him to sit on a small stool without moving for nearly 20 hours per day for several days. They took off all his clothes and poured cold water on his body in winter when the temperature was below freezing point. Another form of torture imposed on Dai was being knocked to the ground and dragged by his feet for over 110 yards. After that torture, Dai’s sweater was torn and the skin on his back was injured.

Dai felt it a blessing that he survived to leave prison on April 21, 2009.

Guan also suffered persecution for her belief in Falun Gong. From September 1999, just over one month after the start of the persecution of Falun Gong, Guan was sent by train to a CCP school in Jiagedaqi where she was made to attend brainwashing sessions every day for five months.

After her release from the school, Guan wasn’t allowed to go home and was forced to stay at a train station for another five months. When she finally arrived home in late May 2000, she found that her husband had been detained and her 12-year-old son had been living by himself at home.

At that time, Guan still believed that the central leadership of the CCP’s regime in Beijing would give her freedom of belief was granted in the Chinese constitution. When she tried to go to Beijing to appeal, she was arrested and sent to Qiqihar Shuanghe Women’s Labor Camp for two years.

“The prison cell was dark and damp, with water seeping through the wall. It’s frozen in winter and full of mosquitoes and bugs in summer. Every morning, I could find more than ten types of bugs dead under my body,” Guan told Minghui.org after her release in 2002.

In the labor camp, Guan also suffered the torture of being beaten, sleep deprivation, and sitting on the small stool without moving, as had her husband. The worst suffering for Guan came as she performed slave labor; she was poisoned when the camp forced her and other prisoners to pack pesticide.

“Every day, I felt that not only my face, hands, and body were covered with pesticides, but also my nasal cavity and trachea were full of pesticides. I was coughing and my nose was running,” Guan said.

Guan was left to raise her son by herself for six and a half years because Dai was detained in prison. With constant harassment and interference to her daily life from the police, Guan found it hard to find a job and had a lot of mental pressure each day.