CCP Virus May Have Infected Half of UK Population: Oxford Study 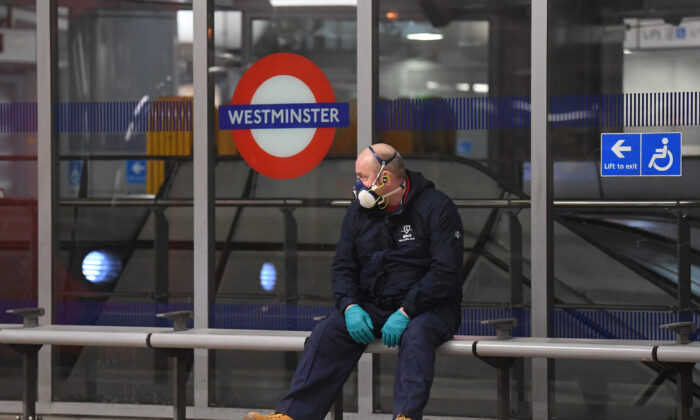 A member of the public wears a a protective mask at a Tube station in London on March 25, 2020. (Alex Davidson/Getty Images)
By Tom Ozimek

The CCP virus that causes the disease COVID-19 may have already infected as much as half of the population in the United Kingdom, a new study based on a model developed by Oxford University scientists suggests.

If these preliminary results are borne out by widespread serological surveys of the population, this would mean that fewer than 1 in 1,000 people infected with the illness gets sick enough to need hospitalization. Confirmation of the conclusions of the study would support the notion that the initial “herd immunity” strategy of the British government may have been reasonable.

“I am surprised that there has been such unqualified acceptance of the Imperial model,” said Sunetra Gupta, professor of theoretical epidemiology, lead author of the study, in remarks to the Financial Times.

Gupta was referring to a key projection study that helped convince the British government to impose more stringent measures to contain COVID-19. It painted a worst-case picture of hundreds of thousands of deaths and a health service overwhelmed with severely sick patients.

The modeling study, by a team led by Neil Ferguson, a professor of mathematical biology at Imperial College London, compared the potential impact of COVID-19 with the devastating flu outbreak of 1918. Ferguson’s team stated that with no mitigating measures at all, that outbreak could have caused more than half a million deaths in Britain and 2.2 million in the United States.

The new Oxford study, done by a team from Oxford’s Evolutionary Ecology of Infectious Disease Lab, isn’t final and is subject to updates, a disclaimer notes. It concludes there is an “immediate need for large-scale serological surveys to assess the stage of the SARS-CoV-2 epidemic.” Serological surveys test for the presence of antibodies in people who have developed immunity to the virus after coming into contact with it.

“We need immediately to begin large-scale serological surveys—antibody testing—to assess what stage of the epidemic we are in now,” Gupta told the Financial Times.

The Oxford team is working with researchers at the universities of Cambridge and Kent to verify their results and quickly move to antibody testing.

While there has been considerable focus on COVID-19 testing, the ability to detect whether someone has already been infected is a key factor in fighting the pandemic.

“If a sizable portion of a local community has some protection, authorities can be more confident in relying less on invasive measures. Once deployed, serological tests are cheap, straightforward, and easy to scale,” said former FDA commissioner Scott Gottlieb, according to The Wall Street Journal.

A microbiology lab at the Icahn School of Medicine at Mount Sinai, led by Dr. Florian Krammer, recently announced the development of this type of serological test for COVID-19, the first of its kind in the United States. A non-peer reviewed preprint was posted on medRxiv.

Krammer was cited by Science Mag as saying that the serological test is simple enough so other labs can easily scale it up “to screen a few thousand people a day.”

Separately, researchers have identified dozens of drugs and compounds, some experimental and others already approved by health authorities, that may be effective in combating the CCP virus.

The fact that the human proteins, or host factors, are impacted by existing drugs and experimental compounds makes it more likely that “effective molecular targets” can be identified that could be hit by potential antiviral therapeutics based on these drugs or compounds.

Chloroquine, or hydroxychloroquine, is approved by the FDA for treatment of malaria, lupus, and rheumatoid arthritis, but not for COVID-19.

This lets doctors use experimental treatments or medications that have been approved for other ailments to treat COVID-19 patients. Under this model, medical practitioners are required to share all patient information regarding administration of and response to the drug, thereby helping inform ongoing trials and regulatory initiatives.

A complete list of the other “literature-derived drugs and reagents that modulate SARS-CoV-2 interactors” is found in table 1a of the study (pdf). These include: JQ1, or thienotriazolodiazepine, which is an inhibitor of the BET family of bromodomain proteins and is at the pre-clinical phase; RVX-208, also known as apabetalone, a drug undergoing clinical trials for the treatment of atherosclerosis and heart disease; and entacapone, an FDA-approved drug used in the treatment of Parkinson’s disease.

Authorities caution against the use of non-approved drugs and reagents to treat medical conditions outside of clinical frameworks such as “compassionate use,” warning that unauthorized use may cause harm or death.