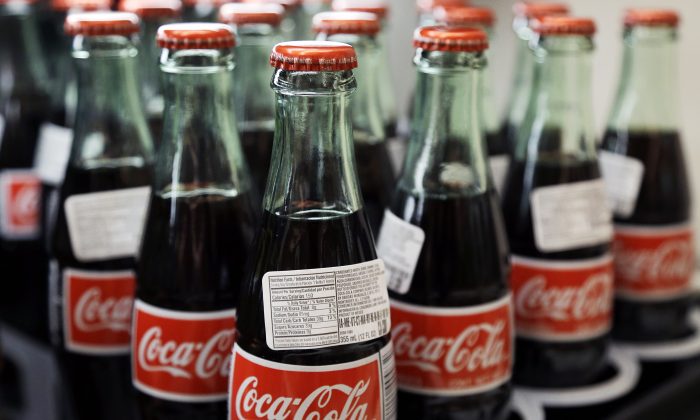 Coca-Cola Co said on Tuesday it expects current-quarter results to take a hit as restaurants, theaters, and other venues that represent about half of the company’s revenue remain closed because of the CCP virus pandemic.

The soda maker’s shares, a Dow 30 component, were down about 4 percent. They have lost about 16 percent so far this year.

Coca-Cola makes syrups and concentrates and through its bottlers distributes them to fast-food chains, theaters, amusement parks, and other venues, most of which have either closed all operations or limited their businesses.

Several concerts and sporting events, including the company-sponsored Tokyo 2020 Olympics, have been postponed or canceled.

As a result, volumes fell about 25 percent globally since the beginning of April, largely stemming from the loss of sales other than at retail stores, the company said.

The hit to second-quarter results will be material, it said, though the ultimate impact on this quarter and the rest of the year is unknown at this time. Coca-Cola added it expected comparable revenue to include 4 percent to 5 percent hit from a stronger dollar.

The Atlanta-based beverage maker said, however, it saw stockpiling in some markets and a sharp rise in e-commerce sales, as consumers rushed to buy goods in preparation for lockdowns.

“It’s certainly not the case that e-commerce is offsetting the losses… E-commerce, even though it’s doubled in sales, for a beverage category, it’s still a very small percentage of the total beverage category,” Chief Executive Officer James Quincey told analysts.

The rapid spread of the novel CCP (Chinese Communist Party) virus, first detected in the Chinese city of Wuhan last December, has claimed the lives of thousands across the globe and has forced a wide range of businesses to shut doors.

“We do know that our over 134 years of business, we’ve seen many types of crisis … We are in a better position today than we were heading into previous periods of challenge,” Quincey said.

For the first quarter, the soda maker reported better-than-expected revenue and profit, and said it expected conditions to start improving from mid-year.

For the first quarter ended March 27, net revenue fell 1 percent to $8.6 billion. Analysts were expecting $8.28 billion, according to IBES data from Refinitiv.

UBS analyst Sean King noted that first-quarter results were better than feared, but the company had a tougher road ahead.

By Nivedita Balu in Bengaluru