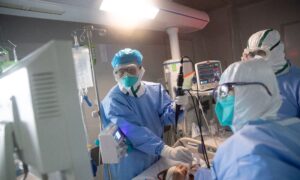 WHO Official: Agency Not Invited to Take Part in China's Virus Probe
0 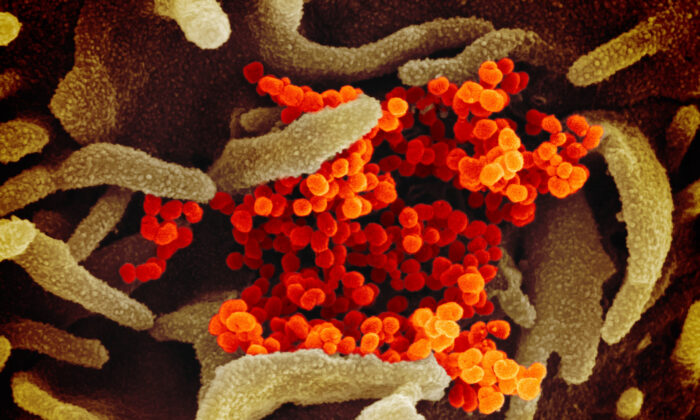 This scanning electron microscope image shows the novel coronavirus (orange), which causes COVID-19 disease, isolated from a patient in the U.S., emerging from the surface of cells (green) cultured in the lab. Photo published on Feb. 13, 2020. (NIAID-RML)
History

The CCP virus was likely introduced to the Chinese wet market in Wuhan that was originally said to be the origin of the pandemic by humans, researchers found.

Scientists in Canada and the United States examined environmental samples from the seafood market in the epicenter of the CCP (Chinese Communist Party) virus and found them “genetically identical to human SARS-CoV-2 isolates,” they wrote in a preprint study (pdf).

SARS-CoV-2 is the technical name for the CCP virus.

The market samples were “most likely from human sources,” they added.

Chinese officials originally suggested the market was where the virus originated. Some sellers market exotic animals there. Coronaviruses circulate among animals and only rarely jump to humans.

“The SARS-CoV-2 genomes in the market samples were most likely from humans infected with SARS-CoV-2 who were vendors or visitors at the market. If intermediate animal hosts were present at the market, no evidence remains in the genetic samples available,” the scientists wrote.

They compared samples of the new virus to SARS-CoV, which appeared in the early 2000s. They found “a surprising absence of precursors or branches” for the new virus, “suggesting that there was a single introduction of the human-adapted form of the virus into the human population.”

The scientists said a number of questions remain but stressed the importance of identifying how the CCP virus adapted for human transmission, citing a lack of evidence to definitively support any of the theories banded about.

“Did SARS-CoV-2 transmit across species into humans and circulate undetected for months prior to late 2019 while accumulating adaptive mutations? Or was SARS-CoV-2 already well adapted for humans while in bats or an intermediate species? More importantly, does this pool of human-adapted progenitor viruses still exist in animal populations? Even the possibility that a non-genetically-engineered precursor could have adapted to humans while being studied in a laboratory should be considered, regardless of how likely or unlikely,” they wrote.

A preprint paper means it has not been peer-reviewed.

Some scientists have posited the virus originated in bats before jumping to pangolins and humans. But “no evidence as yet points to the adaptation of SARS-CoV-2 for human infection in pangolins or the transmission of SARS-CoV-2 from pangolins to humans,” the researchers said in the new study.

They recommend sampling for the virus from more species to try to pinpoint the origins, including taking samples from markets, farms, and wild populations.

The authors were Shing Hei Zhan, a researcher at the University of British Columbia’s Department of Zoology & Biodiversity Research Centre and founder of the Fusion Genomics Corporation; Benjamin Deverman, director of the vector engineering research group at the Stanley Center for Psychiatric Research at the Broad Institute of MIT and Harvard University; and Yujia Alina Chan, a researcher at the Broad Institute.

Chan said in an email to The Epoch Times that the study found SARS-CoV-2 “is well adapted for humans.”

The paper “found and stated that there is currently no genetic evidence that supports the theory that SARS-CoV-2 originated from a laboratory,” she added.

The virus originated in China last year, with the first cases being reported in Wuhan. The city hosts a high-level laboratory.