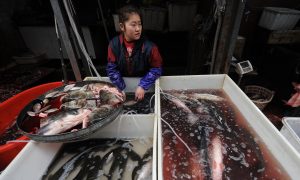 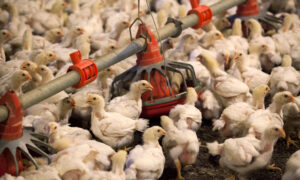 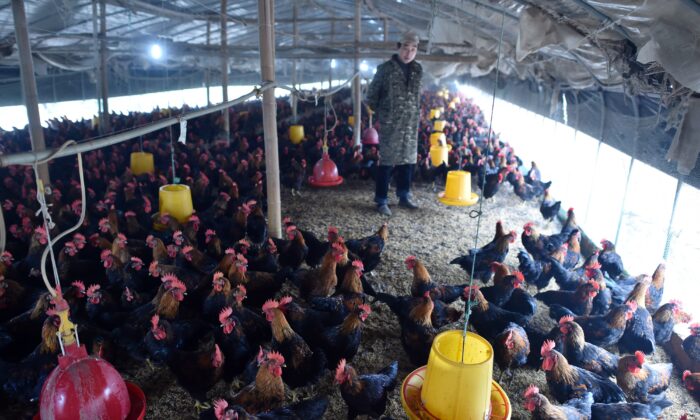 China’s lockdowns, strict quarantines and travel restrictions on hundreds of millions of its citizens to contain the spread of the CCP virus has devastated domestic chicken production.

The Epoch Times refers to the novel coronavirus, which causes the disease COVID-19, as the CCP (Chinese Communist Party) virus because the CCP’s coverup and mismanagement allowed the virus to spread throughout China and create a global pandemic.

With outbreaks of African swine fever (ASF) since August 2018, which resulted in death or government culling of half of China’s 440 million pig population, domestic chicken consumption was expected to hit 15.96 million metric tons.

Domestic chicken production was forecast to jump from 13.8 million metric tons in 2019 to a record 15.8 million tons in 2020, according to an Aug. 14 report by the USDA Foreign Agricultural Service. With domestic production unable to meet booming demand due to capacity limitations and environmental restrictions, the USDA predicted that China would be forced to lift its bans on chicken product imports.

But four of China’s most important chicken producing provinces, including Hubei that was the epicenter of the outbreak, were issued lockdown orders starting in mid-January. Numerous highways were closed, and railways were shut down.

The Hubei Poultry Association wrote a letter to the China Animal Agriculture Association (CAAA) in late January, saying that its members were “very distressed” due to a lack of poultry feed supplies. The CAAA responded by issuing orders for 18,000 tons of corn and 12,000 tons of soybean meal to be delivered to Hubei.

According to the state-owned media outlet Global Times, Hubei had a population of approximately 348 million live chickens, and annually produced over 532 million marketable chickens before the CCP virus outbreak. As China’s sixth largest poultry producing province, Hubei was also an important egg producer.

But with transportation at a standstill in early February, the Poultry Association implored agricultural officials that without feed reaching Hubei: “millions of chickens may soon perish.” The association warned that many farmers were halving the amount they normally fed to each bird, and that some had already begun euthanizing young chickens.

Similar situations where also playing out in other Chinese provinces where baby and live poultry transport had been curtailed and slaughterhouses shut down.

The South China Morning Post in February interviewed a farmer who would only identify himself as Chen. He stated that the closing of the local wet markets and inability to transport food had caused prices he received for chicken to crash to as low as 0.5 yuan per kilogram, or about $.07. Chen added that the disaster would increase because “chickens must be sold when they are 70-days old.”

Hubei Health Commission announced that at midnight on March 25, they will begin easing travel restriction for the province of 60 million, according to AP News. But the city of Wuhan will remain locked down until April 8. The 120,000 migrant workers that were stuck in the Hubei lockdown after coming home for the Lunar New Year have already been allowed to leave on special buses and trains, and residents with a clean bill of health will now be allowed to travel.

China justified banning American poultry imports during 2013, 2014 and 2015 when any U.S. farm reported an avian flu case. Both the United States and China agreed that when a poultry disease hits, unaffected regions should continue trading in poultry products.

The USDA stated that China had lifted a five-year ban on U.S. poultry imports in November and signed the “Phase One Economic and Trade Agreement” in Feb. 14 that will allow more than $1 billion in annual American poultry export to China.