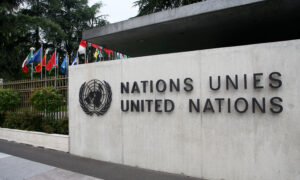 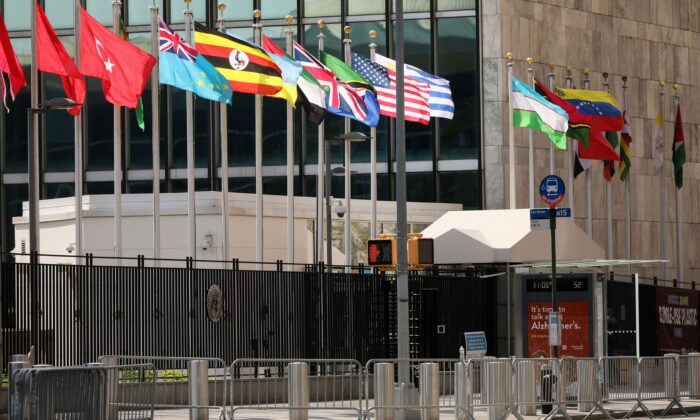 CCP Uses UN as Battleground to Confront US for Hegemony

On May 7, Chinese Foreign Minister Wang Yi once again talked about “multilateralism” at a U.N. Security Council video conference, using the U.N. as a battleground to confront the United States. The U.N. Security Council (UNSC) was originally meant to be a consultative mechanism to avoid conflicts and wars, but now the Chinese Communist Party (CCP)—mistakenly thinking that “the East is rising and the West is falling”—flagrantly uses the UNSC to fight for hegemony, putting it in serious jeopardy.

Wang said that international rules are not the exclusive right or privilege of a few countries and should be made by everyone. Further, the world should not be divided along ideological lines.

Wang’s remarks were clearly directed at the joint statement of the G-7 (Group of Seven) Foreign and Development Ministers’ Meeting from May 2 to May 5, from which the CCP was excluded. The statement highlighted their commitment to liberal democracy and free and fair markets as well as protection of human rights. The CCP, therefore, used the UNSC meeting as a platform to vent its displeasure with the United States and the global governance system. Knowing that the G-7 doesn’t just represent, what he called, a handful of countries, and that the CCP is once again isolated internationally, Wang dared not openly target all countries, but focused mainly on the United States.

Wang said that unilateral actions, such as sanctions, that bypass the UNSC are not legitimate.

The former Trump administration had uncovered a weak spot when it hit the Chinese communist regime with a series of sanctions on the trade and technology fronts. The CCP has been trying to pressure the new U.S. administration to ease the sanctions, but is only further deteriorating U.S.-China relations.

Although the Biden administration did not sustain the former Trump administration’s strongest sanctions and only called the CCP a competitor, the regime’s leadership mistook Biden’s stance and openly began competing with the United States for hegemony.

In addition, Wang said the ongoing pandemic has amplified the inflexibility of the global governance system. Therefore, he thinks developing countries must become more involved and have their voices heard so that the system can move in a more fair and reasonable direction.

It seems that the CCP leadership still believes that “the East is rising and the West is falling” and is eager to dominate the post-epidemic era. The CCP apparently thinks that it has already taken partial control of the U.N. and is ready to fight for supremacy. Wang noted that this year marks the 100th anniversary of the founding of the CCP, and said the U.N. should reorganize and begin anew—to jointly build a shared future for mankind.

At the Boao Forum for Asia Annual Conference 2021, Xi Jinping said that the CCP aims to pursue “the common good for the world.” Wang’s statement echoes Xi’s views on global governance and the idea that the world should undergo a profound change.

Now that Wang has openly affirmed the CCP’s ambitions on its 100th anniversary, it has evoked an intensified sense of crisis globally. Actually, the statement issued by the G-7 foreign ministers largely revealed their profound concerns over the CCP’s interference with international order.

Serious Crisis Caused by the CCP

Secretary of State Blinken’s remarks at the UNSC meeting should be considered the first time the new U.S. administration has directly pointed out the serious crisis caused by the CCP.

Blinken mentioned a series of principles on which the UNSC was founded, including preventing conflict and alleviating human suffering, recognizing and defending human rights, and promoting dialogue and self-restraint. He also acknowledged that the U.N. mechanism had avoided armed conflict between nuclear powers and advanced human rights. “But now it’s in serious jeopardy,” he said. “Nationalism is resurgent, repression is rising, rivalries among countries are deepening—and attacks against the rules-based order are intensifying.”

“We will continue to push back forcefully when we see countries undermine the international order, pretend that the rules we’ve all agreed to don’t exist, or simply violate them at will,” he added.

Referring to the commitments that all nations should meet, including the U.N. Charter, treaties, and conventions, UNSC resolutions, international humanitarian law, and the rules and standards agreed upon under the auspices of the World Trade Organization and numerous international standard-setting organizations, Blinken said the aim of the United States is “to defend, uphold, and revitalize that order.”

While Blinken hit back at the CCP’s revealed ambition, the Party media omitted Blinken’s remarks completely in its report on the meeting. It continually publicized Xi’s phone conversation with the U.N. secretary-general—discussing the multilateralism and global view of the CCP.

It’s unclear whether the CCP’s latest show of its diplomacy style will once again alert the world to the CCP’s mistaken ambition to control the world, which is setting off a worldwide crisis.

Blinken clarified the concept of universal human rights in response to the CCP’s misleading argument. He said: “human rights and dignity must stay at the core of the international order. The foundational unit of the United Nations—from the first sentence of the Charter—is not just the nation state. It’s also the human being. Some argue that what governments do within their own borders is their own business, and that human rights are subjective values that vary from one society to another. But the Universal Declaration of Human Rights begins with the word ‘universal’ because our nations agreed there are certain rights to which every person, everywhere, is entitled. Asserting domestic jurisdiction doesn’t give any state a blank check to enslave, torture, disappear, ethnically cleanse their people, or violate their human rights in any other way.”

Blinken’s explanation is clearly aimed at the CCP’s frequent rhetoric about so-called “interference in internal affairs.”

On May 6, Joshua Wong, the former secretary-general of Hong Kong pro-democracy group Demosisto, was among other activists sentenced by a Hong Kong court for their participation in a candlelight vigil commemorating the victims of the 1989 Tiananmen Square Massacre last year. At that time, Blinken wrote in a Twitter post, “The United States stands with the people of Hong Kong and rejects the sentencing of activists for attending a Tiananmen commemoration. All those imprisoned for nonviolent exercise of guaranteed freedoms should be freed immediately.”

Naturally, the Party media would not reveal what Blinken said about universal human rights, but it was quick to respond in a different way.

On May 8, Xinhua published a propaganda article titled “U.S. Politician Blatantly Harbors Criminals, Utterly Absurd!” Although the article did not name Blinken, it blasted what it called the revealed intent of the United States to cause chaos in Hong Kong. Ignoring the general trend of the times and “taking an historical approach has become an irrational political choice of the United States and the West,” it added. On the same day, the People’s Daily also published a 3,700-word propaganda article—”Major Offenses Expose U.S. Persistent Human Rights Issues.”

The CCP media only responded to Blinken’s remarks on human rights but avoided an important principle he had pointed out.

The U.N. “is based on the principle of the sovereign equality of its member-states,” Blinken said. “A state does not respect that principle when it purports to redraw the borders of another; or seeks to resolve territorial disputes by using or threatening force; or when a state claims it’s entitled to a sphere of influence to dictate or coerce the choices and decisions of another country. And a state shows contempt for that principle when it targets another with disinformation or weaponized corruption, undermines other countries’ free and fair elections and democratic institutions, or goes after journalists or dissidents abroad.”

Blinken also expounded on the concept of multilateralism, but in a different way from the CCP’s version. “When U.N. member-states—particularly permanent members of the Security Council—flout these rules and block attempts to hold accountable those who violate international law, it sends the message that others can break those rules with impunity,” he added. Blinken essentially criticized the CCP for undermining U.N. norms without calling it out by name.

If Blinken and his counterparts from other countries truly understood the CCP’s latest act and ambition postured at the UNSC conference, an international anti-communist alliance would hopefully take shape sooner, and the strategy to solve this crisis together would increasingly become clearer.

Yang Wei has been closely following China affairs for years. He has been contributing political commentary on China for the Chinese language Epoch Times since 2019.