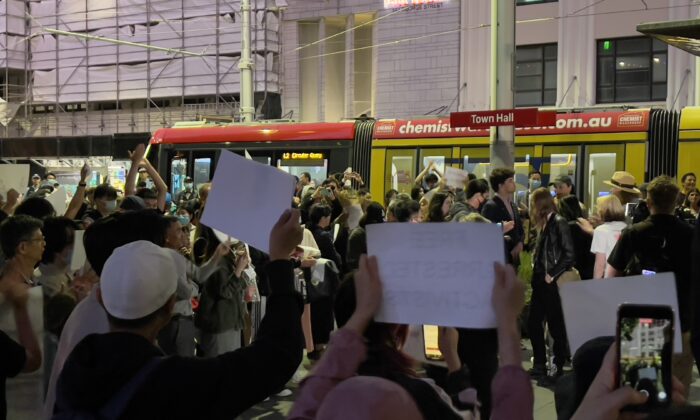 Cindy Zhan
Cindy Zhan is a reporter based in Australia. She covers national news with a focus on China-related issues. Got a tip? Contact her at cindy.zhan@epochtimes.com.au
View profile
biggersmaller
Print

“Xi Jinping, step down! CCP, step down!” “Give me liberty or give me death!”

This is the slogan of over 100 Chinese students who gathered in front of Town Hall, Sydney, to protest against the Chinese Communist Party (CCP)’s extreme “Zero-COVID” policy and dictatorial rule on the evening of Nov. 28.

Triggered by the deaths of at least 10 people in Xinjiang’s capital city of Urumqi, massive protests have broken across China and quickly spread overseas, with many Chinese from different backgrounds saying that this was a scene not seen since the student-led demonstrations held in Tiananmen Square, Beijing during 1989.

Chinese students in Sydney held candlelight tributes to the victims of the Urumqi fire incident, in which first responders were unable to reach an apartment fire that was left to burn for hours due to COVID-19 blockades and locks throughout the residential compound.

Some held up street signs replicatingthe street signs on Shanghai’s “Urumqi Road” in solidarity with Shanghai protesters; some dressed as Winnie the Pooh to mock Xi Jinping, the CCP leader, while others handed out white paper and slogans to passers-by.

The protest slogans ranged from “Xi Jinping, step down”, “CCP, step down”, to “freedom of press, freedom of speech”, and “release all arrested citizens”, to support Peng Zaizhou and the “chained woman” in Xuzhou City, to “close the Xinjiang concentration camps”, “release the Uyghurs“, “Free Hong Kong, free Shanghai, free Beijing, free China.” The crowd also sang “Do you hear the people sing” intermittently.

One Chinese student who attended the rally and spoke under the pseudonym Baishun, said that he was struck by the Urumqi apartment fire incident, in which the government’s policy led to a man-made disaster that could have been avoided. This, coupled with the miscarriage of a pregnant woman in Xi’an City, has made him more aware of the nature of the Chinese communist regime.

“The CCP is using this virus to control its own people and the people of the world. [The virus] is just a tool,” he told The Epoch Times. “The CCP is a complete lie, persecuting all the good people and leaving all the bad people behind. I’m really disappointed with the Party. I hope that one day our country will be democratic and liberal.

“I love my country. I love China. I hope the CCP will fall sooner rather than later.”

Baishun said that he had already renounced the CCP. He thanked The Epoch Times for providing a platform for him to express his feelings.

Another Chinese student, Jack, told The Epoch Times that the CCP is a totalitarian government that is destined to fall and that the Urumqi fire was just the trigger. He himself has been a supporter of democracy since Hong Kong’s anti-extradition bill movement in 2019.

Australian Chinese citizen Daxiong said it was the first time he had seen so many Chinese students gathering for a protest, pointing their fingers directly at the CCP.

“I used to think that Chinese people have no balls, but now they seem to have some,” he said.

Further, Andy Cai, an Australian resident from mainland China who has lived in Hong Kong for many years, said, “This is the first time since the Tiananmen Square massacre in 1989 that I’ve seen so many overseas Chinese students stand up against [the] tyranny and [a] dictator.”

“I think they are very brave. In the past, [those who attended] these activities were all entrepreneurs in Hong Kong, or some individual groups, such as Falun Gong or Tibetan groups, but this time, many young people came forward, which is very touching.”

Robert, a veteran pro-democracy activist in Sydney, said the protests in China this time were caused by the “Zero-COVID” policy, which is different from the June-fourth protest in 1989 when students called for democracy and freedom in the first place.

However, he finds that the Chinese people have gradually realized the importance of democracy in the process.

“This time, people are awakening to the fact that if there is no democracy, the government can do whatever they want. He doesn’t need to talk to you before shutting you down,” Robert told The Epoch Times.

“People didn’t understand it before. They thought that democracy was not something practical that they can feed on. This time, however, it seems that democracy can actually be something to feed on.”

Sun Baoqiang, a writer at Independent Chinese Pen Center, spoke at the rally.

Sun said that the CCP had reached the point of insanity.

“It is horrible that a small group of people are in control of the lives of more than a billion people. The Chinese people are really lambs to be slaughtered,” she said. “If you don’t speak out in the face of such tyranny, you have no conscience.”

Sun, who has stood up to Beijing for years, said that many Chinese students nowadays have no idea about the Tiananmen Square Massacre in 1989 due to the information blockade in China.

“But today is really a good sign that students have stood up,” she said.  “I hope it can trigger a snowball effect.”