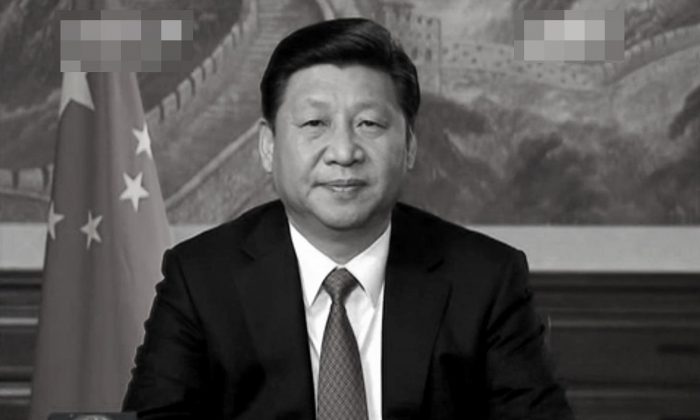 Xi Jinping gave a New Year's address to the nation with a background setting imitative of an American President. Experts say that he is simultaneously expanding his control inside the Party. (Screenshot/NetEase.com/The Epoch Times)
Thinking About China

On Dec. 31, 2021, Chinese Communist Party (CCP) leader Xi Jinping delivered a New Year speech through state-run media, boasting of 2021 as a “landmark” year of “exceptional significance” and “great rejuvenation of the Chinese nation.”

The Chinese nation, however, has something different to say amid the deadly COVID-19 pandemic, the CCP’s purging of private sectors, a higher unemployment rate, and a declining economy.

In his speech, Xi stressed former CCP leader Mao Zedong’s conversation on democracy with Huang Yanpei in Mao’s cave dwellings in Yan’an in 1945, hinting at a potential return to Mao-style authoritarian rule.

Huang was a member of the standing committee of the China Democratic League, which was founded in 1941. In the conversation, Mao told Huang, who was pro-CCP, that only with democracy could the CCP maintain its ruling of China.

The conversation on democracy has since become a major testimony of the CCP’s lies. The so-called democratic parties including the China Democratic League were all reduced to political vases subservient to the CCP after its establishment, while Mao not only insisted on a one-party dictatorship and personal dictatorship, but even launched the Cultural Revolution, wiping out his political opponents, wealthy Chinese, and intellectuals; which led China into a catastrophe rarely seen in its history.

In July 1945, Huang and five other pro-CCP politicians of the then Nationalist government visited Mao in Yan’an and conducted a long talk on democracy, as recalled by Huang’s son, Huang Fangyi, in 2017. Huang said that ancient Chinese dynasties rose due to diligence and best efforts but fell because of slackness and corruption. According to Huang, this was a historical cycle in China with no one ever being able to avoid it.

Mao told Huang that the CCP could break out of the cycle with a new path.

Huang was so impressed by Mao that he became an active advocate of the CCP upon returning from Yan’an. He became CCP’s vice premier and minister of Light Industry after CCP ruled China in 1949.

Mao’s democracy turned out to be a lie. Democratic parties in China are merely political flower vases, used as decoration and propaganda by the CCP. Mao insisted on a one-party dictatorship and personal dictatorship and launched the Cultural Revolution, which brought China into a catastrophe rarely seen in its history.

Huang died in 1965, not knowing the suffering and tragedies of his family during the Cultural Revolution. Seven of Huang’s children were labeled as “rightists” and were persecuted; a daughter of Huang’s was marked down as an anti-revolutionary by the CCP for her belief in Christianity; Huang’s wife committed suicide in 1968 by overdosing on sleeping pills.

It has now been widely acknowledged that the CCP has failed to deliver on its promise of democracy. Xi’s intentional mentioning of Mao’s conversation on democracy echos rumors that he is seeking re-election at the 20th Communist Party Congress in 2022 and reinstating his party chairmanship.

To achieve his goal, Xi has come up with “whole-process democracy,” which is a “Marxist euphemism that masks a communist dictatorship,” as Stu Cvrk, a political commentator, noted in his commentary for The Epoch Times in Dec. 2021. That said, Xi intends to establish himself as an advocate of democracy amid domestic infighting and international pressure.

Ironically, the CCP’s mouthpieces only quoted Mao’s sentence—“Only when the people monitor the government will the government dare not slacken off”—to paraphrase Xi’s touting of Mao-style democracy. They did not even dare to mention the word “democracy” in their propaganda.

Xi Will Go Back to Mao Era Amid Domestic Crisis

As the CCP’s counsels prepare speeches word by word for its leaders, using or not using certain words is intended to represent significant messages that may involve major future directions.

Another detail worth noting is Xi mentioned Mao once in his speech, but he did not mention Deng Xiaoping.

Xi did this in an effort to sever himself from the CCP’s corruption.

When Xi came into power, he was faced with unprecedented corruption in the CCP, which had existed throughout the CCP’s history and deteriorated from Deng’s era to Jiang Zemin’s ruling.

Deng implemented reform and opening policies to save the CCP, not for the wellbeing of the Chinese people. A comparison of China’s per capita GDP global ranking in 1948 and 1978 shows the urgency for a change in China if the CCP wanted to maintain its legitimacy in China.

When students demanded democracy and protested against the CCP’s corruption in Tiananmen Square in Beijing in 1989, Deng personally ordered the suppression of the students’ democratic movement, using military forces, guns, and tanks.

Jiang Zemin stepped into power for supporting Deng’s armed suppression of the students’ protest, thus winning Deng’s endorsement for the highest position of the CCP. He replaced pro-democracy Zhao Ziyang as the General Secretary of the CCP in June 1989. During his tenure as General Secretary of the CCP, Chairman of the State, and Chairman of the Military Committee (from 1989 to 2005), he ruled China with corruption and promiscuity, with the red elites making fortunes in a low profile.

Hu Jintao—Jiang’s successor—labored under the shadow of Jiang, and could do little about the worst corruption in China’s history.

Learning a lesson from Hu, Xi has been attempting to fight corruption to purge Jiang’s faction.

But with the autocratic rule as the root of all the chaos, corruption has become worse and penetrated across the state and the party. More and more corrupt officials emerged in the whole process of political purging.

In late 2019 and early 2020, the COVID-19 pandemic broke out, first in Wuhan of central China, then spreading to the whole country and the world. With the CCP’s draconian “COVID Zero” policies and the suppression of the private sector, China’s economy is further declining.

To get out of these domestic political and economic dilemmas, Xi turns to Mao as his choice.

In his new year speech, Xi hailed the resolution passed at the sixth plenary session of the 19th Central Committee of the CCP from Nov. 8 to 11 as being “the third historical resolution.”

The resolution is of key importance to Xi. According to the CCP’s official mouthpieces, it has established the Xi Core and the Xi Thought—recognizing Xi as the paramount leader and his theory on socialism with Chinese characteristics as the guiding principles of the CCP in its work.

There were two other resolutions with “historical significance” in the CCP’s history. The first one was passed in 1945, in which Mao cracked down on Wang Ming, one of the earliest CCP top leaders and Mao’s major political opponent. The second one was passed in 1981, in which Deng Xiaoping negated Mao and established himself as the second generation top leader of the CCP.

Now Xi wants to position himself as the third generation top leader after Mao and Deng, and like those two, Xi does not lack his political opponents or enemies regardless of the resolution.

Qu Qingshan, president of the CCP’s think tank Central Institute of Party History and Literature, had an article published in December on People’s Daily, an official party mouthpiece. The article is titled “Reform and Opening Up Is a Great Awakening of the Party,” touting Deng’s reform and opening up, without mentioning Xi even once.

According to Tang Jingyuan, a China affairs commentator, this move is generally regarded as a counterattack from Xi’s opponents.

Wang Huning, the Most Dangerous Man, Has Influenced Xi

Behind Xi’s turning to Mao’s practice stands Wang Huning—“the most dangerous man in the world,” as Hugh Hewitt, an American columnist and radio host, wrote in a commentary for the Washington Post in Dec. 2021.

I agree with Hewitt on this point.

“Behind the Party’s guides, Wang Huning is the pen for the Three Represents, the Scientific Outlook on Development, and Xi Thought,” said Wang Youqun.

As the guide of guides, Wang Huning has “outsize influence with Xi,” according to Hewitt.

On Dec. 28, 2021, a video went viral on Chinese social media platforms and YouTube, showing four people being paraded for breaking the CCP’s pandemic regulations. They were seen to have placards displaying their photos and names hanging on their chests and two policemen holding them on each side. Onlookers and riot police surrounded them as they were walked along in public.

This form of public humiliation was popular during the Cultural Revolution and seems to return to China’s social life.

But can Xi really go back to the Mao era?

The world is changing. The CCP’s arrogant and assertive wolf warrior diplomacy has caused a backlash in the international community, with the United States and its allies, as well as European countries, beginning to besiege the CCP, which has committed numerous human rights abuses.

Yue Shan
Follow
Yue Shan is a freelance writer who used to work for CCP’s government organizations and listed Chinese real estate companies in his early years. He is familiar with the inner workings of the CCP’s system and its political and business relations and is dedicated to analyzing Chinese politics and current trends. He has been a long-time contributor to several Chinese media outlets based in the U.S. and Taiwan.