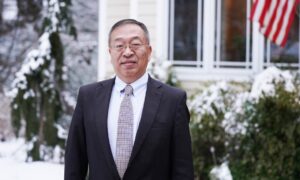 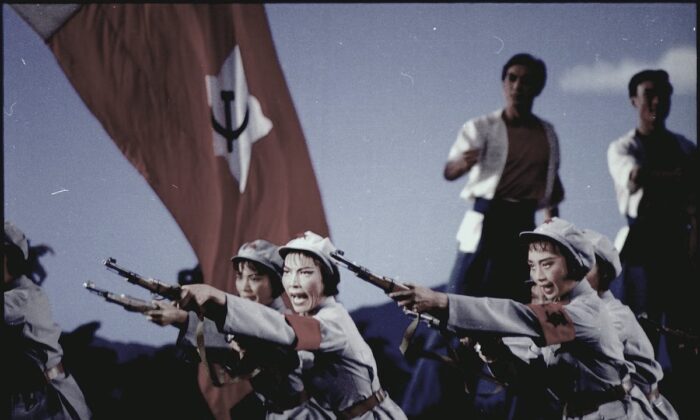 Displayed is a scene from the Red Detachment of Women, a ballet of CCP propaganda. (U.S. National Archives and Records Administration)
Thinking About China

Celebrating the 100th anniversary of the founding of the Chinese Communist Party (CCP) on July 1 is a major political event for Xi Jinping and the Chinese communist regime. To add momentum, the regime’s “wolf warrior” diplomacy has come in handy.

Confronting the US in Alaska

On March 18, Yang Jiechi, a member of the CCP’s Politburo and director of the Foreign Affairs Office, put on a fiery show at the opening of the China-U.S. high-level meeting in Alaska. He berated the United States in a 17-minute speech, saying “the United States does not have the qualification to say that it wants to speak to China from a position of strength.” It was completely different from the meeting between former U.S. Secretary of State Mike Pompeo and Yang in Hawaii on June 16 last year. The CCP’s media shamelessly claimed that Yang ended the national humiliation 120 years ago when the Qing Dynasty signed the Boxer Indemnity.

Beijing’s sanctions retaliation against the European Union, the United Kingdom, the United States, and Canada is on. On March 22, in response to the human rights abuses against Uyghurs in Xinjiang, the EU initiated sanctions for the first time since the 1989 Tiananmen Square Massacre, followed by Britain, Canada, and the United States. On the same day, the CCP imposed counter-sanctions on the EU. The EU targeted four Chinese officials and one entity in Xinjiang, while the CCP imposed sanctions on 10 EU personnel and four entities, including politicians, scholars, think tanks, and political institutions.

On March 26, China issued sanctions on nine British personnel and four entities. On March 27, the Ministry of Foreign Affairs sanctioned the chair and vice chair of the U.S. Commission on International Religious Freedom (USCIRF), Gayle Manchin and Tony Perkins, Member of Parliament of Canada, Michael Chong, and the Subcommittee on International Human Rights of the Standing Committee on Foreign Affairs and International Development of the House of Commons of Canada.

The boycott has also spread to international brands such as Nike, UNIQLO, Adidas, GAP, FILA, New Balance, ZARA, and Under Armour. Dozens of celebrity artists in China, Hong Kong, and Taiwan announced that they have terminated their contracts with those brands.

Since the beginning of this year, China’s military continues to threaten Taiwan, which reached its peak on the day when the United States and Taiwan signed a memorandum of understanding to establish a coast guard working group on March 25. Twenty Chinese warplanes flew near the Air Defense Identification Zone in southeastern Taiwan to conduct escort, missile projection, and directional jamming exercises. According to Chinese media report, the incursions included maritime patrol aircraft, Airborne Early Warning aircraft, fighter-bombers, reconnaissance aircraft, and other jet fighters. Taiwan’s Deputy Defense Minister Chang Zhe-Ping called the combination of aircraft “a sign of aggressive military maneuvering.”

The China Coast Guard Law went into effect on Feb. 1, authorizing officials to use weapons against other vessels, either government or civilian, without warning. In this regard, Japan said it is “totally unacceptable.” The Philippines protested, saying it “is a verbal threat of war to any country that defies the law.” The United States, Vietnam, and Indonesia expressed their concerns.

At the same time, the CCP has created tensions in the East China Sea and the South China Sea. In particular, the National Task Force for the West Philippine Sea issued a statement on March 20, stating that some 220 Chinese vessels were seen moored in line formation in the Julian Felipe Reef in Manila’s exclusive economic zone. The CCP responded that these fishing vessels were temporarily sheltering from the weather and denied that they were Chinese maritime militia. Retired Senior Associate Justice Antonio Carpio worried that it could be a “prelude” of China’s occupation. “China could be repeating its actions during its takeover over the Mischief Reef in 1995 where China started by building shelters for fishermen on the reef until eventually claiming it and turning it into a naval base,” said the report by Inquirer.net.

The recent events show that the CCP’s mindset toward the international community has changed. The regime feels good as they think the CCP virus, also known as novel coronavirus, has damaged the United States and Europe, and the disputes over 2020 election results have weakened the United States. The CCP came to the conclusion that time is on its side and it can be more aggressive in dealing with the United States.

On Jan. 11, Xi Jinping sent a telegram to congratulate Kim Jong-un for being elected as the general secretary of the Workers’ Party of Korea (WPK) in the 8th Congress of WPK.

On March 22, Song Tao, minister of the International Department of the CPC Central Committee, and Ri Ryong Nam, North Korean ambassador to China, exchanged messages on behalf of Xi and Kim respectively during their meeting in Beijing.

On March 27, China’s foreign minister, Wang Yi, and his Iranian counterpart Javad Zarif formally signed a China-Iran comprehensive cooperation plan in Tehran, which includes political, strategic and economic cooperation. According to The New York Times, “Iran did not make the details of the agreement public before the signing. But experts said it was largely unchanged from an 18-page draft.” And “that draft detailed $400 billion of Chinese investments to be made in dozens of fields, including banking, telecommunications, ports, railways, health care, and information technology, over the next 25 years. In exchange, China would receive a regular—and, according to an Iranian official and an oil trader, heavily discounted–supply of Iranian oil.” Iran’s ambassador to Brazil, Hosein Gharibi characterized the document as “the starting point of a new world order,” Iran International reported.

On March 22, Russian Foreign Minister Sergei Lavrov visited China. Before the visit, Lavrov told Chinese state media Xinhua in an online interview that “Moscow and Beijing should work together to resist American sanctions by becoming more self-reliant in science and technology and moving away from the U.S. dollar for trade.” He added, “We need to reduce the risk of sanctions by increasing technological independence and shifting to using our own currency and global currency payments instead of the U.S. dollar.”

The CCP’s media, Global Times wrote, “The timing of Lavrov’s visit is noteworthy as it means Russia is the first country China shares information and opinions with on key issues after the China-U.S. face-to-face communication, which shows China and Russia have deep strategic mutual trust and support each other on core interests.”

The CCP intends to establish an alliance against the United States. In this way, the international strategic landscape has accelerated toward China-U.S. confrontation.