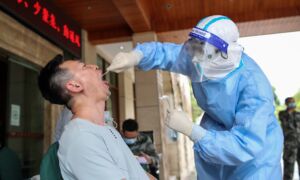 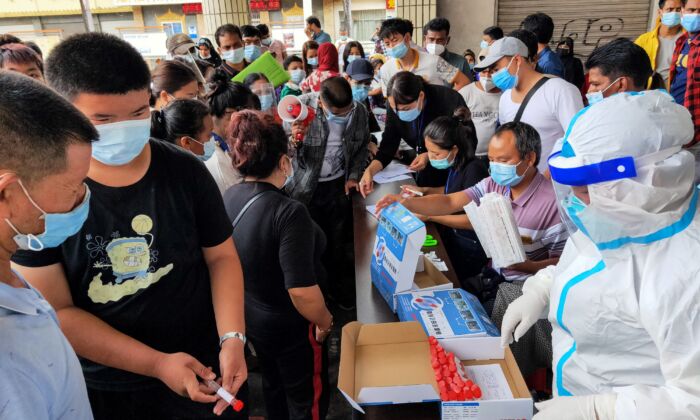 “[The CCP (Chinese Communist Party) virus outbreak in Ruili] severely impacted and undermined the overall situation of epidemic prevention and control across the country and the province, … has caused serious consequences and adverse effects,” the regime stated in an announcement explaining why it fired Gong.

On Thursday, Ruili announced about a dozen diagnosed patients and asymptomatic carriers, which caused Gong to lose his position. However, this number may not represent the true scale of the outbreak.

“The real infections must be a bigger number,” China affairs commentator Zhong Yuan concluded on April 7 after analyzing the officially announced data.

Zhong pointed out that the national data announced by the health commission is even smaller than the city data that was released by the Ruili regime, which is logically impossible. At the same time, the Ruili regime announced numbers that were in conflict with each other, and it did not explain the source and meaning behind the data.

Ruili said that 8,162 people in the city were quarantined at quarantine centers or hospitals on April 7, while the national health commission only announced 7,423 people quarantined across the country.

A tier-five city in Yunnan Province, Ruili has a land area of 364 square miles and 205,000 residents (approximately one-ten-thousandth of the national population).

The Chinese regime has deliberately masked the total infections in a bid to safeguard its image both nationally and internationally. Therefore, whether a government official can prevent and control an epidemic is key to assessing his overall performance.

Gong’s case shows other Chinese officials the importance of concealing the truth to the public.

Gong, 46, has been the party boss of Ruili since April 2018, according to his official resume. If he hadn’t announced the CCP virus outbreak in Ruili, Gong might have been a candidate for promotion next year.

It is unclear whether Gong will be permitted to take a new position in the future. At present, he is fired from all positions within the regime, although he maintains a first-level investigator ranking. This means he can earn the same salary as before but has no power to command others.

In the CCP system, the higher level officials appoint the lower ones, and the party bosses are ranked higher than the mayors.

If the regime doesn’t accurately report the numbers, it’s hard to know the true scale of the CCP virus outbreak in China.

Recently, some Ruili residents told The Epoch Times in phone interviews that they were locked at home and only receive official information from state-run media reports. On the other hand, they do get information from many friends and relatives but are not sure what is the real truth.

Zhong compared the announcements about the outbreak from Ruili and the communist authorities. He expressed concern for Ruili citizens in a commentary published in the Chinese-language Epoch Times on April 8.

Zhong pointed out that the regime announced on Wednesday a total of 114 infected individuals, who had 4,594 close contacts in the past 14 days. These close contacts encountered 3,568 additional people.

“On average, one infection had contacted over 40 people within 14 days, and 31 more people indirectly … It’s incredible that these people have such broad contacts,” Zhong wrote.

Zhong didn’t believe that ordinary Chinese people would contact dozens of others within two weeks, especially under the pandemic. He believed that the real, reported infections should be much more than the announced data.

On April 8, the city regime didn’t remove the lockdown policy, as previously planned, and didn’t tell people when it would unlock the city. On April 6, it ordered the second round of mass testing of all residents. The first rounds were performed on March 31 and April 1.