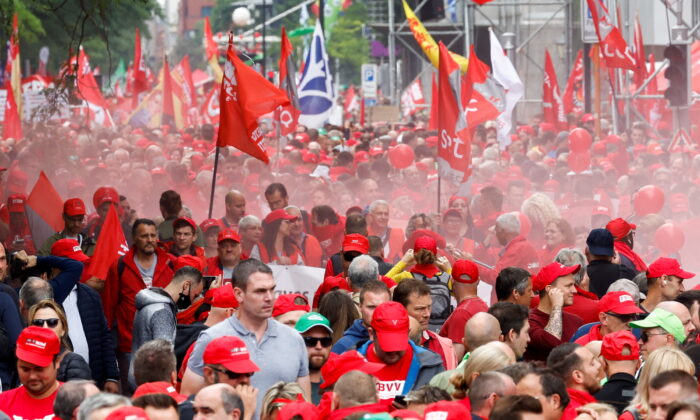 People take part in a demonstration over the rising cost of living in Brussels, Belgium, on June 20, 2022. (Yves Herman/Reuters)
Europe-China Relations

A Chinese diplomat recently posted an anti-NATO statement about a protest that recently occurred in Brussels, causing backlash from the international community. This happened while the regime’s special envoy was visiting European countries to improve China-EU relations.

On June 20, about 70,000 Belgian workers marched through Brussels demanding their government take action against the sharply rising living costs. At the same time, one-day strikes were occurring at the Brussels Airport and on local transport networks nationwide that brought public transportation to a near-halt.

On June 23, Zhang Heqing, the cultural Attaché at the Chinese embassy to Pakistan, retweeted a post by a user named Fifty Shades of Whey about the Brussels demonstration. Zhang wrote: “Tens of thousands of protesters marched in Brussels chanting ‘Stop NATO’ on June 10, expressing anger at the rising living costs & condemning NATO countries’ rush to arm Ukraine.”

Fifty Shades of Whey said clearly in his original post that the protest in Brussels was about soaring prices. He also posted a Reuters report on the protest.

Zhang’s claim was immediately called out by international experts..

Theresa Fallon, Director of the Centre for Russia, Europe, Asia Studies (CREAS), told the Radio Free Asia (RFA) that she was shocked that a Chinese diplomat who’s not in charge of EU affairs tweeted a post that misstated the facts.

She said that the march had nothing to do with NATO, “Beijing is using this form of political warfare or disinformation in the run-up to the NATO summit which takes place next week,” according to the RFA.

The NATO Summit will be held in Madrid from June 28 to June 30. According to NATO’s official website, one of this year’s strategies will for the first time address the challenges presented by “China’s growing influence and international policies” as an Alliance. In addition, the leaders of NATO’s four Asia-Pacific allies Australia, New Zealand, Japan, and South Korea will also attend the summit for the first time.

Fallon said that China is “trying to tell the Europeans one thing, while at the same time supporting Russia.” She pointed out that Beijing is the biggest customer of Russian energy, and those sales contribute to Russian president Vladimir Putin’s war efforts.

Recently, Putin and Xi also had a phone conversation confirming their support for each other.

At the end of May, the Chinese regime sent Wu Hongbo, the special representative for European affairs and former UN Deputy Secretary-General, as Xi Jinping’s special envoy to visit European countries, including Belgium, Cyprus, the Czech Republic, France, Hungary, Germany, and Italy, for 3 weeks to meet with key figures ahead of the NATO summit.

During his visit, Wu admitted that Beijing “made mistakes” in handling the epidemic, conducted “wolf warrior diplomacy,” and mismanaged the economy. Wu’s tour followed the visit of Huo Yuzhen in late April to early May, the Special Representative of the Ministry of Foreign Affairs, whose attempts to mend China-EU relations failed.

Craig Singleton, senior fellow at the Foundation for Defense of Democracies in Washington, said that China’s attempt to reset its relationship with the EU “is reflective of growing recognition in Beijing that its wolf-warrior tactics have undermined China’s economic position with Europe, one of China’s most important trading partners, and that China needs the European market and European consumers to help get itself out of its current economic mess,” he said to RFA.

This is not the first time Zhang made controversial comments that caused a backlash from the international community. In March 2021, Zhang posted a video of a dancing Chinese girl on Twitter with the caption: “Off your hijab, let me see your eyes.#Xinjiang dance.”