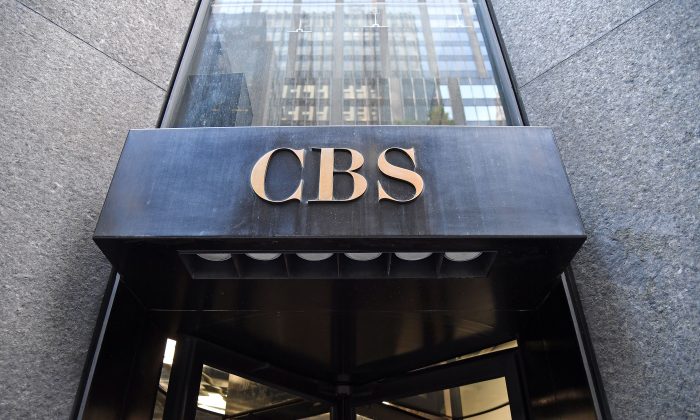 The CBS logo is seen at the CBS Building, headquarters of the CBS Corporation, in New York City on August 6, 2018. (ANGELA WEISS/AFP/Getty Images)
Politics

A clothing apparel company owned by a veteran said their patriotic, pro-flag Super Bowl television advertisement was rejected by CBS Sports, the network with exclusive rights to host the Super Bowl.

The brand, Nine Line Apparel, which describes itself as a lifestyle company aiming to “reinvigorate the sense of patriotism and national pride,” believe that their commercial was blocked due to its content. CBS did not immediately respond to a request for comment.

Tyler Merritt, the company’s CEO, told the Washington Examiner that CBS claimed their executives did not believe the clothing brand could pay for the hefty price tag behind their 45-second advertisement.

“CBS’s purported reason for rejecting a Super Bowl commercial that extols patriotism is totally out of bounds,” he said. “Let’s call this what it is: a blatant attempt to censor a message that their politically correct executives find offensive. We urge Americans who believe it’s important to show respect for our flag and national anthem to join us in calling out this offensive bias. It’s time to give a penalty flag to CBS.”

The cost to run a 30-second spot during the NFL matchups this year was a record $5.25 million, according to CNBC. The clothing company has an annual revenue of $25 million.

The advertisement contains footage of American soldiers, military equipment, first responders, the graves of fallen soldiers, and is narrated by former U.S. Marine Mark Geist, who is a survivor of the Benghazi terrorist attack. It also urges Americans to stand for the flag in response to the controversy surrounding NFL players who knelt in protest during the playing of the national anthem.

“Don’t ask if your loyalty is crazy. Ask if it’s crazy enough,” Geist says in the advertisement. “When they question you running toward danger for those who are unable or unwilling, when they laugh at the thought of you willingly sacrificing your life for someone you may never know, stay that way.”

He continues: “Some people think you’re crazy for being loyal, defending the Constitution, standing for the flag. Then I guess I’m crazy. And for those who kneel, they fail to understand that they can kneel, that they can protest, that they can despise what I stand for—even hate the truth that I speak—but they can only do that because I am crazy enough.”

Nine Line’s commercial appeared to be a counter to former San Francisco 49ers quarterback Colin Kaepernick’s advertisement with Nike, which debuted at the start of the 2018 NFL season. At the end of Kaepernick’s video as part of Nike’s “Just Do It” campaign, he says “So don’t ask if your dreams are crazy. Ask if they are crazy enough.”

Kaepernick first started his unorthodox way of protesting “police brutality” and “racial injustice” when he sat on a bench during the playing of the national anthem in August 2016, but after he faced widespread criticism from fans nationwide he began to kneel during the anthem instead. He never again stood during the national anthem. The quarterback opted out of his contract with the 49ers in 2017, and no team has hired him since.