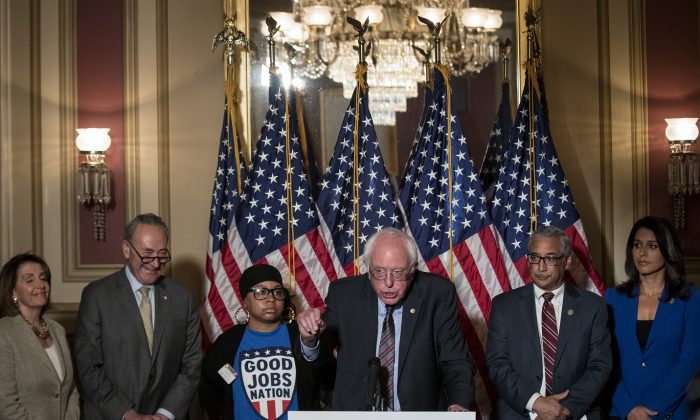 Sen. Bernie Sanders (I-Vt.) speaks during a press conference to discuss legislation for a 15 dollar minimum wage, on Capitol Hill, in Washington on May 25, 2017. (Drew Angerer/Getty Images)
Politics

WASHINGTON—House Democrats’ proposal to raise the federal minimum wage to $15 an hour by 2025 would improve the lives of 17 million people, but it would also cost the jobs of another 1.3 million, according to the Congressional Budget Office (CBO).

“In an average week in 2025, the $15 option would boost the wages of 17 million workers who would otherwise earn less than $15 per hour,” CBO said in the report, which was made public July 8.

But those improvements would come at a cost, as “1.3 million other workers would become jobless,” CBO said, and there is a significant possibility the total of lost jobs could reach as high as “3.7 million workers.”

All of its predictions of the economic effects of a higher minimum wage are subject to two qualifications, CBO said, including “uncertainty about wage growth under current law and uncertainty about the responsiveness of employment to a wage increase.”

Both qualifications are affected directly by the record low unemployment levels and unexpectedly strong job creation that have resulted from President Donald Trump’s tax cuts in 2017.

The CBO report is drawing attention in Congress, where House Democrats are backing their “Raise the Wage Act of 2019,” and on the campaign trail, where all of the Democratic presidential contenders are pushing the increase to $15 an hour.

The proposal would raise the minimum, and index it to inflation so that its value isn’t eroded over time. The bill also guarantees the minimum for employees who work for tips, thus ending the sub-minimum wage.

“Economists agree that low-wage workers are more likely than other income groups to spend extra earnings immediately,” according to a fact sheet published by the House Education and Labor Committee.

“Researchers estimate that a 10 percent increase in the minimum wage would increase sales by around $2 billion each year. This new demand helps create an economy that works for everyone, not just the wealthy few,” the committee said.

A study released earlier this year by the Economic Policy Institute (EPI) said that during “the phase-in period of the increases, the rising wage floor would generate $118 billion in additional wages, which would ripple out to the families of these workers and their communities.

“Because lower-paid workers spend much of their extra earnings, this injection of wages would help stimulate the economy and spur greater business activity and job growth.”

But Republican strategist Brian Darling told The Epoch Times on July 10 that “Democrats are pushing socialist ideas that will hurt working Americans because there will be less private sector jobs with high taxes and less opportunities for low skilled and new laborers, thanks to government mandates.”

Darling, former counsel and senior communications director for Sen. Rand Paul (R-Ky), predicted that “a high federal minimum wage will lead to more unemployment and will kill the private economy.”

The $15 minimum wage, Darling said, as well as “free health care for all and higher taxes on job creators is the religion of the Left. The Left has been rooting for a recession since the day President Donald J. Trump was sworn into office.”

Democrats “can make a recession a reality by poisoning American capitalism with more socialist ideas, leading to long-term stagnation of our economy,” Darling said.

“The Left is under the illusion it can force employers to artificially increase wages, with no adverse consequences for American workers,” Grezler said.

“The Raise the Wage Act is a misguided attempt to increase incomes. In reality, it will eliminate jobs and decrease incomes for workers with the fewest skills and least experience,” she said.

Jim Manley, former communications director for then-Senate Majority Leader Harry Reid (D-Nev.), acknowledged in an interview with The Epoch Times on July 10 that, “while I quibble with some of the particulars [of the CBO analysis], there is oftentimes, frankly, a trade-off on public policy. Most Democrats should feel comfortable embracing” the $15 minimum wage.

Manley added that “there is also the ripple effect along with economic growth that will hopefully help a lot of those folks get other jobs.”

Manley noted that he worked for Sen. Ted Kennedy (D-Mass.) “when he got the second-to-the-last increase in the minimum wage done in 1996.”

Public Citizen President Robert Weissman agreed, saying, “notwithstanding the CBO finding, there’s lots of contrary data—including from real-world experience—that minimum wage rises do not cost jobs (though, of course, at some threshold they would).”

Even so, he said, “Democrats should reject the bad economics of the CBO report, and embrace a living wage, which is not just a matter of fairness and justice but affirmatively good for the economy.”